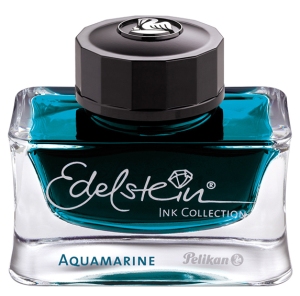 It was almost one year ago today that Pelikan gave us Edelstein Amethyst on the heels of a few new product announcements.  Déjà vu.  That pattern appears to be repeating itself starting with the news of the upcoming M805 Vibrant Blue which was announced yesterday.  Today, Pelikan officially announced the Edelstein (pronounced EY-dell-shtine) 2016 Ink of the Year.  Unlike the Vibrant Blue, it appears that this rumor was 100% accurate.  This upcoming year will feature Aquamarine, marking the thirteenth addition to the Edelstein line-up and the fifth Ink of the Year.

Pelikan describes this color as “neither blue nor green; it’s something in between.”  The shade was chosen by the Facebook fans of Pelikan International and is anticipated for availability in the Spring of 2016.  It looks to be an interesting blue-green but where it falls in that spectrum is still unclear.  For the color conscious, historically aquamarine has been characterized as a bluish tint of cerulean toned towards cyan.  It’s best to withhold judgement until we start seeing some writing samples but this appears to be more bluish than green based on the product shots.  If you were hoping for a greener ink, don’t forget the Pelikan 4001 Dark Green coming early next year.

This is the fifth annual release of an “Ink of the Year” and the second release that Pelikan has turned towards its fans to help choose.  Aquamarine joins the now discontinued Turmaline, Amber, Garnet, and Amethyst.  All of the colors in the line can be traced back to gemstones (the German word Edelstein translates into gemstone).  The Ink of the Year releases are limited runs produced only for one year at a time.  If you’re a fan of a color, stock up because when they are gone, no more will be produced.  Despite their limited nature, bottles often remain available in the retail pipeline well after production ends.  Aquamarine will be available in 50 mL bottles as well as standard international cartridges.  You can see the official announcement and discussion at Pelikan International’s Facebook Page.