Pelikan is well known for their regularly released limited edition fountain pens in addition to their standard line-up.  There have been many limited edition releases over the years and I thought that it might be interesting to look back at what is considered to be the very first of these modern releases from Pelikan.  The details surrounding this model have caused some confusion over the years which I hope to dispel by the end of this post.  Which model launched such a distinguished tradition of releases?  The answer is none other than the highly sought after M800 transparent green demonstrator.  Affectionately referred to as the “Green Ocean,” it is the predecessor to the highly successful M800 Blue Ocean released as a run of 5000 fountain pens in 1993.   The confusion surrounding the transparent green release often stems from the fact that none of these M800s are identifiable as limited editions as the pens themselves are not numbered.

Pelikan Schreibgeräte tells us that customers from the United States requested an M800 in a transparent green color sometime around 1991.  Heeding that request, the green demonstrator was released for sale in 1992.  This model was ultimately made in an unnumbered and unlimited production run, similar to the special editions of today like the recent M800 Burnt Orange.  The suggested retail price of the fountain pen at launch was $450. 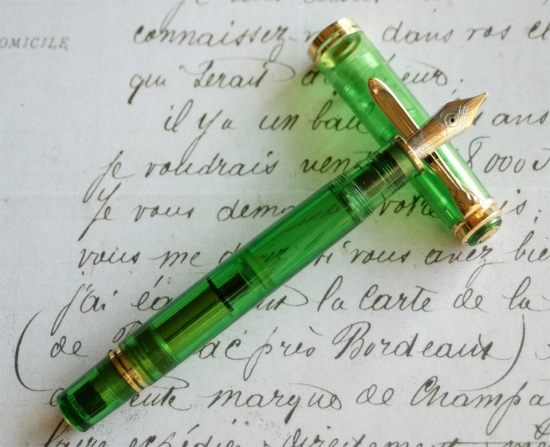 A total of 3000 M800 fountain pens and 648 K800 ballpoint pens were set aside specifically for the North American market with a smaller run of pens supplied to Italy and France.  While the pens themselves are not numbered, the North American importing company had certificates printed at their own expense and packaged with each pen in order to indicate their limited nature.  As such, they were able to increase the value of the release by way of clever marketing.  This pen was dubbed “The Collector’s Edition.”  Each certificate appears to have been hand numbered and signed/dated by a J. Dudley.  I have seen certificate dates range from 1992-1994.  Once the run had sold out, additional transparent green M800s were produced but were not part of The Collector’s Edition and did not come with numbered certificates.  Because of this, there has been some confusion over the years as to just how many runs of this model were made.  To be clear, only one run is known to have occurred.  Certificates have indicated as many as 850 green transparent ballpoint pens were released worldwide but the exact number of fountain pens are unknown.  It is interesting that K800s bearing a certificate from the Collector’s Edition seem to have been released with slightly different wording.  I have seen three variations on the certificate as follows;

M800: “IN NORTH AMERICA, THERE ARE ONLY THREE THOUSAND OF THESE RARE, EXQUISITE WRITING INSTRUMENTS.” – Signed Certificate

K800: “IN NORTH AMERICA, THERE ARE ONLY 648 OF THESE RARE, EXQUISITE WRITING INSTRUMENTS.” – Signed Certificate

K800: “IN THE WORLD, THERE ARE ONLY 850 OF THESE RARE, EXQUISITE WRITING INSTRUMENTS.” – Unsigned Certificate

Marketing materials depicted below simply begin with a quote from Robert Browning on the cover; “Suddenly as rare things will, it vanished.”  The rest of the literature continues to stress the rarity of the release.  The pens were packaged in a black Lucite case which was made special for the Collector’s Edition release.    The pamphlet appears to have been put out by Pelikan, Inc’s stationary division from Franklin, Tennessee, U.S.A. as well as Anthes Universal Limited located in Brampton, Ontario, Canada. 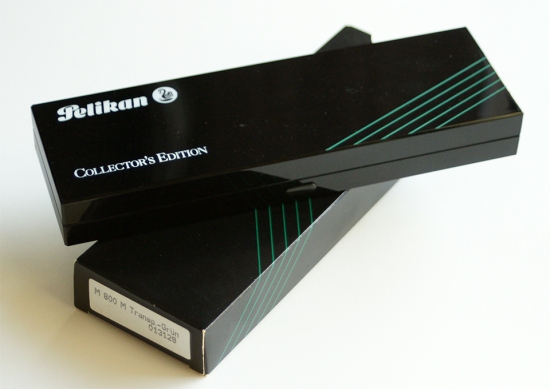 The pen itself has the familiar form factor of the M800.  It is done in completely transparent green material which allows for visualization of the brass piston as well as the remaining ink level.  There is a trim ring at the section with two at the piston knob in addition to double cap bands.  The traditional beak clip is present and the cap top is stamped with the two chick logo.  A gold medallion adorns the piston knob as was the style at the time.  These pens were manufactured in the early 1990s at the time when manufacturer’s marks were transitioning from West Germany to Germany. Cap bands from the earlier portion of production are stamped “Pelikan W.-Germany.”  Pens from later in the run are stamped only with “Pelikan Germany.”  Many of the nibs on these pens can be found with the ‘PF’ stamping also consistent with the time of manufacture. 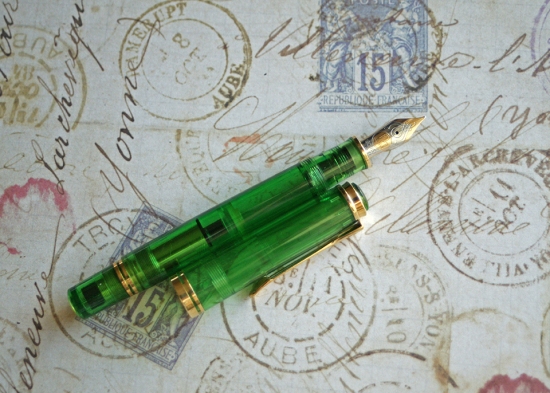