Over the years, Pelikan has made available their archives to facilitate the research and development of several books about the brand, its history, writing instruments, advertising, etc.  These publications have been rather limited in number and were made in relatively small runs, sometimes of just a few thousand copies.  The net effect of this is that while these are great tomes of information, they are often times incredibly hard to find and command a significant price when encountered for sale. 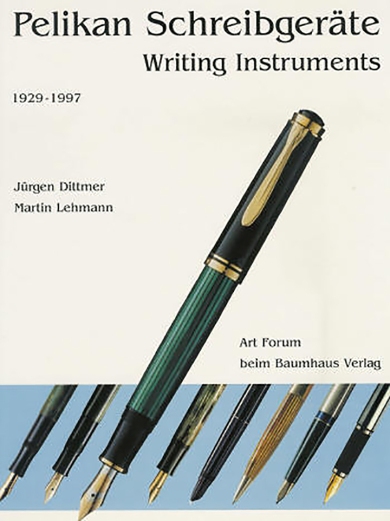 This book gives a comprehensive survey of the pens manufactured by Pelikan from 1929 to 1997.  In addition to pens, there is information on the company’s history, brand development, and other products such as inks.  Long considered to be an indispensable resource for the Pelikan collector.

This book is a second edition and, similar to the first, it gives a comprehensive survey of the pens manufactured by Pelikan from 1929 to 2004.  This is a very different volume than the first though and both volumes should be read for a more complete understanding.  In addition to pens, there is information on the company’s history, brand development, and other products such as inks.  Reportedly limited to just 2000 copies produced.

A special exhibition of Pelikan’s history opened in the Historical Museum of Hanover, Germany on February 20, 2008 and ran through July 13th.  This was part of a year long effort on the company’s behalf to commemorate the 170th anniversary of the brand.  A book about the history of the Pelikan company along with product info and excellent photographs/illustrations was released alongside this event.  Always of interest, depictions of some of Pelikan’s earliest adverting posters are included.  Unfortunately, it is only written in the German language which limits its audience but it remains a nice resource.

Pelikan
The Brand (How the baby bird got into the nest, and how many)
By Detmar Schäfer
2013 (Hard Cover) – English

Pelikan – The Brand was released as Pelikan was celebrating its 175th anniversary.  The book marks the occasion by tracing the development of the Pelikan trademark and brand from its inception.  There are a great many high-resolution advertisements and historical documents depicted, some of which were previously unknown.

The title of this book translates to “History of German Advertising by the Example of Günther Wagner – Pelikan.”  This tome is 292 pages with 600 sensational illustrations of Pelikan ephemera taken from Mr. Rings’ collection as well as Pelikan’s own archives.  Deutsche Werbegeschichte takes a look at Pelikan’s advertising history from 1880 through the year 2000.  The book is available in hard cover and is written in both German and English with translation provided by Tamara E. Koch.  Published in 2015, Heinz Rings has clearly outdone himself, providing an extensive catalogue of advertising over the years in print and other media.  To the best of my knowledge, it is currently only available for purchase from the author via German eBay (seller: Pelikaner2).