It can be quite frustrating when you finally decide upon buying a certain pen only to find that it is not just out of stock with your preferred vendor but others as well.   Such has been the case for perhaps the last six months for those in the market for a new Pelikan M800 or M1000 for instance.  Vendors have consistently been frustrated by estimated delivery schedules that seem to be constantly pushed back.  That’s not to say that some models aren’t making it out into circulation.  Special editions such as the M600 Tortoiseshell-Red and the M205 Petrol-Marbled have found their way into retail channels and consumer’s hands.  As I first reported in August of last year when discussing COVID-19’s impact on Pelikan’s operations, the global supply chain continues to feel the ramifications brought about by the coronavirus pandemic which is still infecting people across the globe.  This has hindered Pelikan from receiving certain materials necessary for their manufacturing in a timely manner while also disrupting the company’s ability to deliver its finished goods to their distribution partners effectively.  Last year, Pelikan’s Global Marketing Manager for Fine Writing Instruments, Jens Meyer, was optimistic that most issues would be hammered out by the fourth quarter of 2020.   In saying that, he also conceded that, for some select products, it might take a little bit longer to end the backlog, particularly with Pelikan’s standard assortment.  Since that backlog has now persisted through the first quarter of 2021, I reached back out to see where the company stood.  Read on to see just how he responded to that line of questioning.

END_OF_DOCUMENT_TOKEN_TO_BE_REPLACED 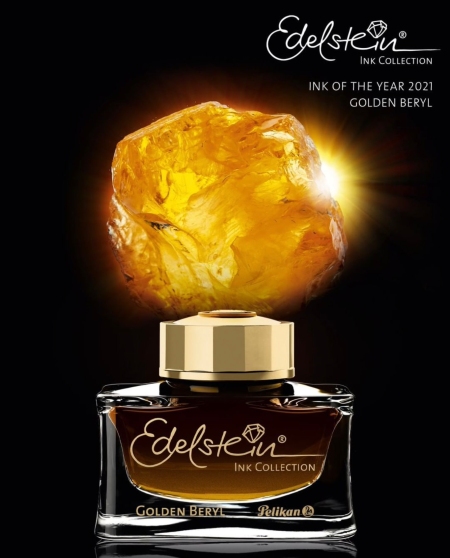 We have seen a release schedule upended and product slow to make its way into retail channels thanks to a pandemic which came to define 2020.  Still, the show must go on and Pelikan seems ready to rise to the challenge of brightening all of our spirits, both figuratively and literally.  The first new product of 2021 comes in the form of the next Edelstein Ink of the Year release.  This year’s selection is nothing short of astonishing as Pelikan has decided to break new ground by introducing its first ever shimmering ink to the Edelstein line, a top request per the company’s social media accounts.  The 2021 Ink of the Year will be none other than Golden Beryl.  The silver-gray hue of Moonstone now gives way to a yellow-golden ink with shimmering qualities, perhaps the biggest departure from any past release to date.  Golden Beryl will mark its debut as the eighteenth gemstone inspired ink in the line-up and it will be the tenth Ink of the Year, soon to be counted amongst the likes of  Turmaline (2012), Amber (2013), Garnet (2014), Amethyst (2015), Aquamarine (2016), Smoky Quartz (2017), Olivine (2018), Star Ruby (2019), and Moonstone (2020).  As of now, this is expected to be a limited run, in production for just one year only.  Golden Beryl is slated to hit store shelves in April provided the pandemic doesn’t intervene to delay the launch.

END_OF_DOCUMENT_TOKEN_TO_BE_REPLACED

It was around this time last year that we learned of the 2019 Edelstein Ink of the Year selection so it should not come as too much of a surprise that today brings news of Pelikan’s next batch of limited edition ink.  In addition to learning of the M200 Pastel-Green, our second bit of product news is all about Moonstone, the forthcoming 2020 Edelstein Ink of the Year.  The palette again shifts, this time to a silver-gray hue which is a significant departure from the prior Star Ruby release.   This will be the seventeenth gemstone inspired color to grace the line-up.  Moonstone will join Turmaline, Amber, Garnet, Amethyst, Aquamarine, Smoky Quartz, Olivine, and Star Ruby as the ninth Ink of the Year release.  Some of these special editions have been resurrected to have a second life but, at least for now, we can expect this one to be a limited run for the next year.  Moonstone is anticipated to grace store shelves sometime around March of 2020.

END_OF_DOCUMENT_TOKEN_TO_BE_REPLACED

As the embers of 2018’s excitement begin to slowly fade with the year’s close, Pelikan rekindles a sense of anticipation for next year by giving us a small taste of what’s to come.  News broke yesterday of the limited edition Herzstück 1929 which pays homage to the origins of Pelikan’s fountain pen production some 90 years ago.  Today, reports of the 2019 Edelstein Ink of the Year have surfaced.  With the introduction of Star Ruby, the palette appears to have swung from a shade of green to more reddish hues.   This will be the sixteenth gemstone inspired color to grace the line-up.  The forthcoming Star Ruby will join the likes of Turmaline, Amber, Garnet, Amethyst, Aquamarine, Smoky Quartz, and Olivine as the eighth Ink of the Year.  Unlike last year’s Olivine, this one was not a fan chosen shade.  While details are just emerging, we can expect availability sometime in March of 2019.

END_OF_DOCUMENT_TOKEN_TO_BE_REPLACED

The Edelstein collection of inks now spans 15 different shades inspired by various gemstones.  These have been split between a standard perennial line up of eight inks with the remaining seven comprising a more limited edition series usually only available for a short time.  In a surprise move during March of 2017, Pelikan announced that Aquamarine, the 2016 Ink of the Year, would become part of the regular line-up, swelling the ranks to nine.  Today, Pelikan took to social media to announce another resurrection.  This time it is Garnet, the 2014 Ink of the Year, that will joint the standard assortment, bringing the total number to an even ten.

“We have some great news for you! It‘s back again: our Edelstein Ink of the Year 2014 Garnet is now part of our standard assortment! 🙂 Catch it, if you can. 😊”

Garnet was billed as a dark red color.  The fact that this is the second time an older limited edition has been put back into service suggests that this might be a new trend for Pelikan.  That possibility may give hope to those longing for some of the inks from days gone by.  Amber, Turmaline, and Amethyst come to mind as past fan favorites that have been sorely missed since their discontinuation.  I’m a little bit at a loss as to why Garnet may have been chosen ahead of any one of those.  It’s not that Garnet doesn’t have its admirers but it generally received somewhat mixed reviews at the time of its original release.  Amber, in my opinion, would have been the smart play here, hands down.  Still, I won’t complain about added variety and I’ll take heart in the fact that we may yet see some of the more desired inks make a return.  What are your thoughts on Garnet’s new status?

END_OF_DOCUMENT_TOKEN_TO_BE_REPLACED

The 2018 Edelstein Ink of the Year has long been anticipated and Pelikan took the opportunity today via their social media accounts to make the official announcement.   You may recall that Pelikan ran a social media contest back in 2016 which allowed fans the opportunity to choose this year’s limited edition color.  Over 1,200 suggestions were submitted per the company but Johannes from Cologne was ultimately declared the winner of that contest with an olive-green colored entry.  That ink now takes on the official moniker of Olivine in keeping with their gem stone themed line of colors (not to be confused with the Monteverde ink of the same name).  This release follows the brown tinted Smoky Quartz from the 2017 limited edition run.  It will be the fifteenth addition to the Edelstein line-up, a line that is currently composed of nine regular production inks.  It joins the likes of Turmaline, Amber, Garnet, Amethyst, Aquamarine, and Smoky Quartz as the seventh Ink of the Year.

END_OF_DOCUMENT_TOKEN_TO_BE_REPLACED

Earlier today, Pelikan announced via their Facebook Page that the Edelstein Ink of the Year for 2016, Aquamarine, is to be added to the standard ink line-up.  The photo’s caption reads, “Aquamarine is back.”  The announcement corresponds with the International Day of Happiness, a UN sanctioned celebration designed to promote happiness in the world around us.  This breaks with the prior tradition of making the Edelstein IOTY editions available only as limited runs that were forevermore unavailable once stock ran out.  I’m not certain why Aquamarine was chosen over any of the other limited editions that have come before it.  I know that there are many out there, myself included, that would love to see inks like 2013’s Amber make a come back.  Does the permanent resurrection of Aquamarine make you happy?  Click the link below to participate in a poll about which limited edition colors you would like to see make a come back and don’t forget that next spring promises to bring us an as yet unnamed shade of olive-green.

END_OF_DOCUMENT_TOKEN_TO_BE_REPLACED 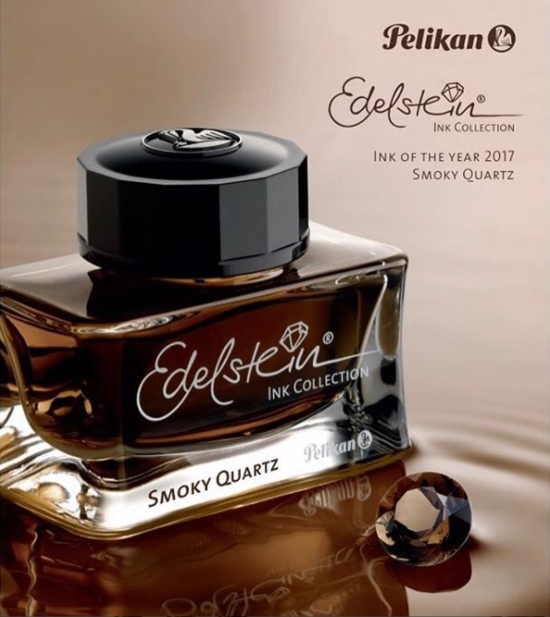 Çelik Kalem, a major distributor for Pelikan pens in Turkey, follows up their announcement of the M101N Bright Red from yesterday with news of yet another upcoming release.  Instead of a pen, their Instagram feed gives us our first glimpse of the Edelstein 2017 Ink of the Year, Smoky Quartz.  This newest gem stone inspired color will follow on the heels of the very popular Aquamarine from last year’s limited edition run.  It will be the fourteenth addition to the Edelstein line-up and the sixth Ink of the Year.