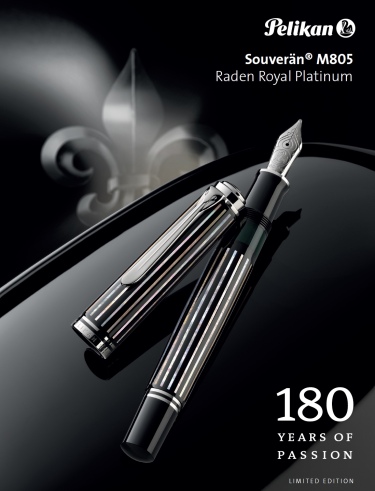 Over the past few years, Pelikan has begun to more consistently bring us new limited edition Raden releases.  It should come as no surprise then that a Raden model would be in the works for this year, a year in which the company is celebrating a historic anniversary.  What does one give as a gift for a 180th anniversary?  While there aren’t any well established customs for such an occasion, something in platinum seems a fitting choice.  Perhaps that is why Pelikan has chosen to give us the M805 Raden Royal Platinum.  For those new to the hobby, pens done in a Raden style employ a traditional Japanese art whereby finely ground abalone is embedded or glued onto laquer-coated surfaces.  The result is an inlay that shines with a rainbow of colors when struck by light.  This year’s release will make a worthy addition to the models that preceded it.  These include the Kyokko & Gekko (2005), Moonlight (2011), Sunlight (2013), Starlight (2014), Sunrise (2016), and Royal Gold (2017).  It would seem that the Royal Platinum is the kindred spirit to last year’s Royal Gold.  The design and finish appear to be the same with one in silver tones and the other in gold.  I suspect that many owners of the Royal Gold will be clamoring to add this one as a companion piece.

The Raden Royal Platinum will have the standard palladium-plated furniture characteristic of the M805 line.  This includes two trim rings at the piston knob, two trim rings on the cap, and a single trim ring on the section.  The cap sports the standard pelican’s beak clip and the cap top depicts Pelikan’s single chick logo, also plated with palladium.  The piston knob and section are made of a black resin and what appears to be a very dark green ink-view window sits just above the section’s cap threads.  The Royal Platinum will come equipped with a monotone 18C-750 rhodium plated nib in a medium width as the standard though individual vendors may offer other sizes (any M8xx nib will fit this model).

Where the Royal Platinum sets itself apart is the striped pattern on the barrel and cap.  Just like we saw with the Royal Gold, there are alternating verticals of black resin with reflective stripes of radiant abalone which have a much cooler array of tones than last year’s model.  Each pen is signed and numbered using Maki-e techniques and, as has been the custom, will come in a traditional Japanese gift box made from Paulownia wood.  The Royal Platinum will be limited to 388 pieces, the same number as was available for the Royal Gold.  Given the limited nature and craftsmanship that goes into these pieces, their beauty is often only surpassed by their price tag.  The MSRP in Germany is €1750 (with VAT) and I would expect to pay anywhere from $1500 to $2000 at retail depending on where you live and purchase from.  This one will be joining the M205 Olivine for a release in September 2018.

Left: Cap top depicting the limited edition number. Right: The artist’s signature on the barrel of the pen.

I can’t see too many owners of the Raden Royal Gold passing this one up if for nothing else than to have a striking companion piece.  My only gripe with the “Royal” design is that the stripes on the barrel stop below the ink window such that when the pen is capped, there is a noticeable gap between the edge of the cap band and the beginning of the stripes.  It has been my contention that it would have been more aesthetically pleasing to keep the gap the same distance maintained elsewhere between the stripes and the furniture for a more uniform look though I recognize that is a purely subjective assessment.  I suspect that the Royal Platinum may carry forward the same design issue for those who were annoyed previously.  Still, it was a small quibble with the prior design and one that I’m sure won’t deter too many if again present here.  What are your thoughts on the M805 Raden Royal Platinum?  Which of the two designs do you like better, gold or silver?