Pelikan got out ahead of their vendors today, taking the opportunity to break the news of their next big fountain pen release via their Instagram account. Rumors about this one started at the end of March and now we finally have our first look at the upcoming M605 Tortoiseshell-Black. This newest M605 takes the iconic tortoiseshell finish that many of us know and love in a somewhat new yet still familiar direction. For the longest time, we simply had Tortoiseshell finishes in Brown. White was added to the palate about twenty years ago. More recently, the company played with shades of Red, also in an M6xx sized model interestingly enough. This new model will mark the first time that we encounter one in black. Not only will the finish display an interplay between hues of black and white, that pattern will be married to palladium plated trim. Most of the tortoise finishes to date have all featured gold trim so this will be something that further distinguishes this model. This new release will be put out as a special edition meaning that the production run is to be limited. Availability is expected for some time at the end of May. Read on to find out all that we know so far.

Close up on a young Carol Anne Freeling answering the ring of an old rotary phone. After a brief pause to listen to the caller and with the phone still pressed to her ear, she glances over her left shoulder and says, “They’re ba-ack” in a lilting voice. This pop culture staple is from 1986’s Poltergeist II trailer and it was the first thing that sprang to my mind when I learned of the return of the M800 Black-Red. Yes, you read that correctly. News of the Black-Red’s triumphant return was first broken by The Nibsmith. Oh, it was a good run while it lasted. The M800 Black-Red was on the market as a regular production model circa 2001 until its discontinuation in 2012. Since then, they’ve become increasingly scarce on the secondary market and, consequently, all the more desirable. It is high on the list of many who missed out on the original run and one of the most requested pens that I hear people ask about Pelikan re-releasing. Someone in Hannover must have been listening because, as of mid-March, the M800 Black-Red will once again join the standard Souverän line-up and will likely be around for the foreseeable future. Read on to learn about all of the details.

Starting in 2015, Pelikan established an annual tradition of crafting fountain pens from their Classic series that matched their Edelstein limited edition Ink of the Year release. Historically, news of those models would drop in August, but the release schedule has been on its ear for well over a year now as a consequence of the coronavirus pandemic and likely some internal issues as well. Many have come to fear that the tradition would finally come to an end this year given the company’s silence as 2021 begins to wind down. Whether or not we’d ever see this model come to light has been one of the most common questions that I’ve fielded over the last several months.  Pelikan put those fears to rest today with news of a new Classic model M200 to accompany this year’s Golden Beryl, the seventh such release from the company based on their line of limited edition inks.   Prior to the M200 Golden Beryl, we have had the; M205 Moonstone (2020), M205 Star Ruby (2019), M205 Olivine (2018), M200 Smoky Quartz (2017), M205 Aquamarine (2016), and the M205 Amethyst (2015).  Some of these models have made a bigger splash than others and several are now quite hard to come by. It was 2019’s Star Ruby that first employed a glitter induced shimmer effect along the translucent material of the barrel and cap and, like the M205 Moonstone that preceded it, the Golden Beryl looks to incorporate the same. Pre-orders are going live today from many vendors with this one due out sometime in November 2021. Read on to discover all of the essential details regarding the newest fountain pen out of Germany.

Pelikan International’s 2020 Annual Report provided a forecast regarding what we should expect this year out of Hannover, and it has been spot on thus far. Tucked away on page 13 was the statement, “For 2021, we will continue the tradition of reinventing the popular designs with new materials and colours, though we plan to concentrate on less product launches as we cautiously move forward in the market.” It is already August and all we’ve seen come to market thus far has been the M205 Petrol-Marbled, M1000 Maki-e Seven Treasures, and the M605 Green-White. In 2019, prior to the pandemic, we already had nine new models by this point in the year and seven the year before that. Not only is the company sticking with a strategy of fewer releases, they are also embracing the rehash of popular designs with new colors. Late last evening, vendors broke news of the next release due out. This time we have the M1000 Raden White Ray, a re-imagining of 2020’s Green Ray, which is just the latest addition to a growing line of limited edition Raden releases. It will join the likes of past M1xxx Raden models which includes the Moonlight (2011), Sunlight (2013), Starlight (2014), Sunrise (2016), and Green Ray (2020). For those that don’t know, Raden is a traditional Japanese art form used to embellish lacquer ware and woodwork. Small pieces of shimmering abalone shell are utilized in the creation of unique, handcrafted designs. A Urushi lacquer is applied to the barrel and cap before strips of abalone shell are laid down after which a final layer of lacquer is applied to seal everything in place.  Each pen is signed by the artist and hand numbered using the Maki-e technique. Just like the Green Ray, this will be a limited edition run of only 400 pieces worldwide. Availability is anticipated for some time in September 2021.

For those that have found the M205 Petrol-Marbled to be too small and the M1000 Maki-e Seven Treasures to be too large and expensive, Pelikan now brings a third option to the table for 2021. Today broke with news of the forthcoming M605 Green-White fountain pen. This mid-size model keeps with Pelikan’s trend, predominantly over the past five years, of bringing brighter barrel colors with white resin accents to the M6xx line. Starting with the M600 Tortoiseshell White in 2012, we have since seen the M600 Pink (2015), M605 White Transparent (2017), M600 Turquoise-White (2018), and M600 Violet-White (2019). This time we get an eye-catching shade of green arranged in stripes made of cellulose acetate accented by white resin and palladium plated furniture. If we’ve learned anything recently, it is that pre-release photos can be deceiving but there appears to be a lot to like here. If this one looks like a nice addition for your flock, it is expected to be available at retailers worldwide starting in July of this year. This will be a special edition therefore will only be available while supplies last. 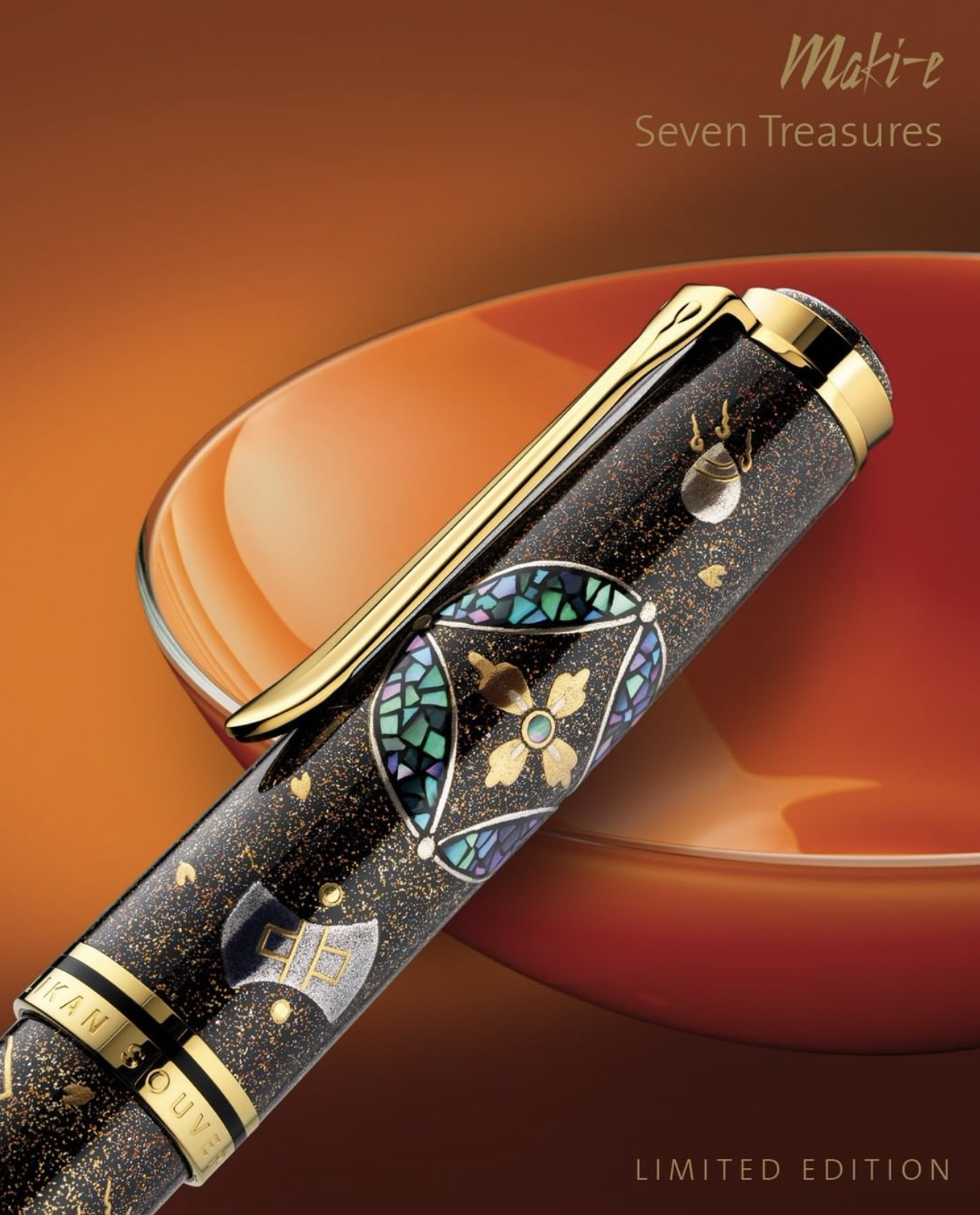 With the first quarter of 2021 done and dusted, uncertainty remains over just how extensively the pandemic may continue to disrupt Pelikan’s operations, including their timeline of new releases.  The Petrol-Marbled M205 should be landing soon for those eager to get their next Pelikan fix.  If you were hoping for something a bit bigger, just today Pelikan has given us a glimpse of the next Maki-e release coming out of Hannover.  Meet the Maki-e Seven Treasures limited edition, the successor to 2020’s very well received Kingfisher.  Pelikan has this to say of their newest model;

Keeping with past trends, the Seven Treasures is once again built off of Pelikan’s flagship M1000 chassis.  Limited to just 123 pieces worldwide, this newest Maki-e release is anticipated to launch sometime in June 2021.

END_OF_DOCUMENT_TOKEN_TO_BE_REPLACED

For those of you that keep up with Pelikan’s usual cycle of releases, you know that by the end of March in most years, we’ve already had news of two and sometimes up to three new fountain pens.  Sadly, this year, like the one before it, is not like most years.  That unfortunate fact, made evident by the dearth of new releases out of Hannover, is almost certainly attributable to the chaos that the coronavirus pandemic has wrought upon supply chains across the globe.  The drought may be coming to an end however as Atlas Stationers out of Chicago, IL broke news of Pelikan’s next release via their website this evening.  The next pen to market will hail from the company’s Classic line and carry the moniker of M205 Petrol-Marbled.  Petrol is a color scheme that Pelikan has employed with pens from some of their other lines including the Pura, Jazz, and Twist.  Pelikan’s new marbled finish will combine blues and greens in a way that, to me, is reminiscent of the M805 Ocean Swirl from 2017.  Rather than a standard addition to the line-up, this one looks to be a special edition release, intended only as a limited run.  The Petrol-Marbled is reportedly targeted for a mid to late April 2021 ship date.  I would expect most vendors to start taking pre-orders soon.

END_OF_DOCUMENT_TOKEN_TO_BE_REPLACED

News about one of Pelikan’s most anticipated 2020 models broke today.  With its release pushed back slightly due to the coronavirus pandemic, today’s newcomer makes a compelling case for the wait being wholly worthwhile.  For the last several years, we have seen quite a few white pens grace the M600 line starting with 2012’s Tortoiseshell-White.  Another tortoise joins the family today, bringing with it a bold and bright look.  The M600 Tortoiseshell-Red puts a fresh coat of paint on an old theme which does wonders for the aesthetics.  Of course, this model will quickly conjure recollections of 2014’s M1o1N Tortoiseshell-Red which employed a similar color scheme though with an overall different style.  Pelikan’s supporting literature states; “This colorful series gives the classic Souverän a bright and warm appearance.  The extraordinary color variation is reminiscent of a beautiful sunset and encourages us to stroll down memory lane.”  The M600 Tortoiseshell-Red will be available in December and vendors are taking pre-orders now.