The M630 was released in 1999 according to Pelikan’s website and the black barreled variant is the only model in this series.  It is characterized by a black barrel in the standard post-’97 M600 size with a green ink view window.  They are somewhat heavier than the M600 due to the sterling silver cap.   The M630 has a sterling silver cap with gold-plated clip and cap bands.  The section and piston knob on these are resin as compared with the silver of the M625 series.  There are two trim rings at the piston knob, a trim ring at the section, and two cap bands.  There is a crown style cap top with a painted two chick logo.  The nib is 18C-750 two-toned gold.  Also released in 1999 was the M430, a very similarly styled but smaller pen. 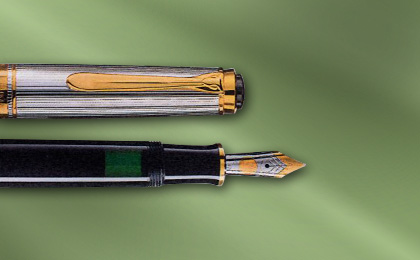 NOTE:  The black M630 is not depicted in its entirety due to the lack of available images.