One of the common questions that Pelikan novices and collectors alike frequently encounter is; “When was my pen made?”  Often times it can be difficult to narrow down an exact date but Pelikan has left some clues behind to help us at least approximate a production date.  Four important attributes will be discussed below; 1) INTRODUCTORY YEAR,  2) CAP TOP LOGO,  3) TRIM STYLE,  4) W.-GERMANY VS. GERMANY.

Let’s start with when the pen was introduced as that is as good a starting point as you can get.  Below is a table of relevant (and approximate) release dates for major models from Pelikan’s line-up.  Please note that this list is certainly not exhaustive.  For more detailed information on release dates of various models from 1982 and on, please see this timeline.   For further reading, Werner Rüttinger host some valuable information about these models and others here.

With the above graphics in mind, we get an idea of how to date certain pens based on the cap top.  Earlier cap tops will be etched, usually seen on pens produced before 1997.  The later cap tops, from 1997 and on, have painted logos.  If your cap top logo has a nest with; 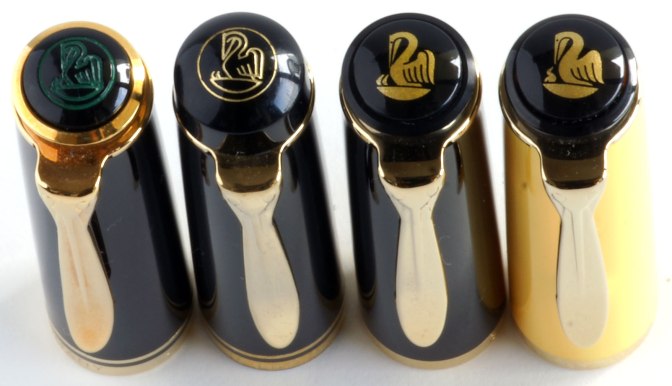 For modern pens, the trim style can help with identification.  In 1997, Pelikan revised their tradition and Souverän lines which essentially split most of their models into pre-1997 and post-1997 trim variants.   These are often referred to as “old-style” and “new-style.”  The bulk of the changes were made to the cap top, cap bands, and barrel trim.  The M600 model was enlarged to better fit its role between the M400 (it was formerly the same size as the M400) and M800.  A few examples of trim changes amongst the different models are as follows;

*Note: From time to time, pens will come up for sale that don’t fit the above conventions.  For instance, an M150 Black-Burgundy with a pre-’97 barrel and a post-’97 cap top (and vice versa).  I’ve seen similar with the M150 Black-Grey and the M250 Black-Green.  These seem to be transitional models, likely a consequence of Pelikan using up left over stock.

Finally, a designation of “W.-Germany” on pens introduced in the 1980’s can help identify a time frame of production.  If a pen is marked “W.-Germany,” it was likely produced prior to re-unification at some point before 1992 (some sources say ’90/91).  A marking of “Germany” is post-unification and would date to after 1992.  To avoid confusion, it should be noted that this designation is generally not applicable to pens released prior to the 1980’s.