When you dig back through Pelikan’s long and storied history of pen making, you can find all sorts of odd editions made for local markets or done by regional distributors.  Some of those models came from company sanctioned production runs while others had a more dubious genesis.  The M800 Laser (2000) comes to mind as a good example of a strictly regional release.  The Laser was an exclusive limited edition of only 100 pens which were specially engraved by Visconti and authorized by Pelikan Milan.  This pen was made only for the Italian market, but it was not warmly welcomed in Hannover resulting in several being destroyed but that is a story for another day.  My point is that it has been some time since we’ve seen a truly regional release from Pelikan which is why May 30th will be a stand out day in the company’s history.  On that day, Pelikan Romania unveiled a new fountain pen titled “King Michael I of Romania – Royal Edition.”  This model is not like many of the other Souveräns that we’ve seen and its unveiling was met with much more ceremony than we’ve been accustomed to.  Read on to learn more about this neat and ultra-limited edition.

Michael I (Mihai I in Romanian) lived from October 25, 1921 until December 5, 2017.  He has the distinction of being the last king of Romania having reigned from July 20, 1927 until June 8, 1930 and then again from September 6, 1940 until his abdication on December 30, 1947.  Michael first ascended to the throne upon the passing of his grandfather, King Ferdinand I.  He was a minor when he took the throne due to his father’s (Carol II) renouncement of his royal rights and exile some years earlier.  He again became Prince Michael upon his father’s return to Romania which is why his reign was not continuous.  The 1940s were a tumultuous time and war was afoot.  Carol II was deposed in 1940 allowing Michael to retake the throne.  The government at this time was led by a military dictator who aligned himself and the country with Nazi Germany.  King Michael took part in a coup that successfully overthrew the country’s leadership and installed a new head who declared allegiance to the Allies.  All was not well however, and a pro-Soviet government came into power circa 1945.  Michael tried to oppose the communist controlled regime though was largely unsuccessful.  On December 30, 1947, he was forced to abdicate his throne and was sent into exile after having his citizenship stripped and his properties confiscated.  The communist leadership of Romania was overthrown in 1989 but Michael was not allowed to return to the country until 1992.  That visit drew many admirers and the post-communist government was alarmed by Michael’s popularity so they barred him from further visits.  It wasn’t until 1997 when Emil Constantinescu rose to leadership after winning the presidential election that Michael’s citizenship was restored and many of his confiscated properties were returned to his family.  He was the last King of Romania because he produced no male heirs and the rules of the line of succession do not allow for a female to take the throne.

King Michael I was a beloved monarch and now he is being honored with a King’s pen.  With its development beginning in 2017, this Royal Edition is built off of the M800 chassis and is made from black resin for both the cap and barrel.  The cap top is Pelikan’s standard 24 carat gold plated single

chick logo which is accented by the usual trimmings of a Souverän.  Pelikan’s standard beak clip and double cap bands remain unchanged.  The side of the cap depicts the golden signature of the King, “Mihai.”  The piston knob on this edition stands out as unique.  It eschews the standard trim for a single, thicker gold plated ring.  Engraved on that ring is the royal motto of the Kingdom of Romania, “NIHIL SINE DEO,” which is Latin for “Nothing Without God.”  Two thirds up the barrel is a circular brass medallion plated in 24 carat gold done in two shades.  The medallion depicts the King’s crown.  Just beyond that is a green ink window and the section is adorned with a single golden trim ring.  Finally, the pen is finished off with Pelikan’s standard 18C-750 two toned gold logo nib.  The dimensions of this royal edition are the same as for any other M800 which means it has a length of 5.5 inches, a diameter of 0.52 inches, a weight of 1.02 ounces, and an ink capacity of 1.35mL.  The pen itself comes packaged in a very attractive gift box with a specially labeled bottle of Pelikan’s 4001 Royal Blue ink.  This edition is limited to just 300 pieces and carries a sales price (excluding VAT) of 3800 Romanian Leu (~$894).  It will be sold through Herlitz Romania SRL. 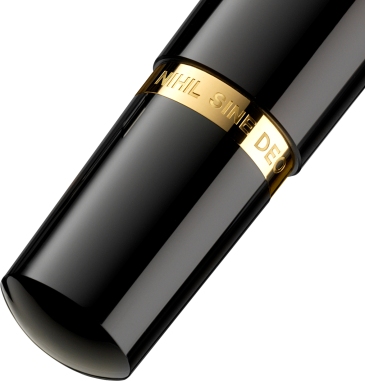 A deviation from the standard, this thick trim ring at the piston knob depicts the royal motto of the Kingdom of Romania

The King Michael I of Romania Royal Edition was revealed in a manner that is unusual for a Pelikan branded product.  Pelikan Romania’s Facebook page teased the announcement starting 30 hours before it’s unveiling.  At first “Symbol, faith, legacy” captioned a photo of Pelikan’s logo nib.  At 24 hours, “Tradition, loyalty, honor” captioned that same nib in profile.  With 9 hours to go, we saw Michael’s signature with the quote, ” The world of tomorrow cannot exist without morals, without faith and memory.”  On launch day, the word “Legacy” accompanied the text, “Letter of the King” which was the title of the launch event.  Later that evening (Thursday, May 30, 2019), the pen was officially unveiled at Clubul

Diplomatic in Bucharest, Romania.  The event was well attended, including Her Majesty Princess Margareta, the Romanian Crown Custodian, and her husband, His Royal Highness Prince Radu along with representatives of civil society as well as journalists.  While the design phase was begun within the King’s lifetime, he sadly did not live to see its completion.  The first copy of the series would have been offered to King Michael of course but was presented to the crown’s custodian in his stead.  They have decided that this should remain the “King’s Pen” and be displayed at Peleș Castle in the Carpathian Mountains.  The next four pens were auctioned off and the funds donated to the Peleș Royal Patrimony Association whose purpose is dedicated to protecting, preserving, restoring, and capitalizing on the cultural, historic, artistic, technical, and architectural heritage of the royal domain.

This is a limited release meant for a local market.  As such, it will not be coming to a retailer near you.  Still, it is a wonderful pen that honors a man who stood up to the evil forces of his day and suffered for it, earning his country’s admiration and respect along the way.  I don’t know if we’ll see more pens like this come to market from Pelikan, but I can only hope that we do.  If you’ve read this far and are thinking to yourself about how you might acquire one of these, it is no simple feat.  There appears to be a registration open to those 18 and older where you lodge your intention to buy.  The seller then reviews those submissions in the order received and decides who might get a pen.  The registration is not a reservation and there is no guarantee to receive the product.  I’m not sure what selection criteria Herlitz will use to distribute these but with such a limited quantity available, it is likely that these won’t be around for very long.  Since the product page is only available in Romanian and the registration not easily found, I presume that most of the models are likely to stay close to home, perhaps by design.

The presentation box for the this model is rather disitinctive 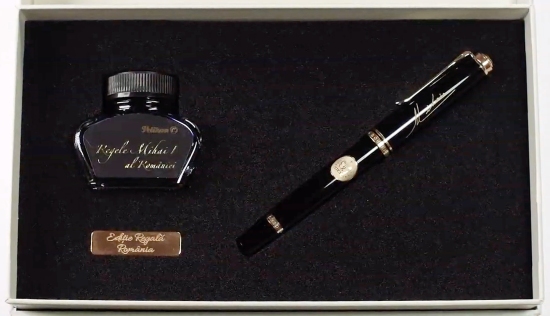