Despite all of the rumors swirling about Pelikan’s upcoming 2016 releases, the company is still able to surprise and delight its customers.  In an unexpected announcement today from several well known vendors, Pelikan has proven that it still has a trick or two up its sleeve.  Seemingly out of nowhere comes news of the soon to be released M800 Grand Place.  If this pen has a familiar look, that is because it is very similarly styled to the M620 Grand Place released in 2006 and the more recent M201 Bayou in 2015.  The M800 Grand Place appears to take on features of both pens in a hybrid fashion.  This M800 special edition is named after the world famous market and historical landmark in Brussels, Belgium.  According to Wikipedia, “The Grand Place (pronounced ɡʁɑ̃ plas) or Grote Markt is the central square of Brussels.  It is surrounded by opulent guildhalls, the city’s Town Hall, and the Breadhouse building containing the Museum of the City of Brussels. The square is the most important tourist destination and most memorable landmark in Brussels.”  Also of note, Brussels serves as the headquarters of the European Union.

The Grand Place is anticipated for a February 2016 release which would put it out in tandem with the M805 Vibrant Blue.  This pen will be available in the standard nibs sizes of EF, F, M, and B and the nib itself will be made of the standard two-toned 18C-750 gold common on the M800 line.  Some vendors are exclusively offering an extra broad nib variant for those interested in pursuing such an option.  The trim is the standard M8xx gold-plated furniture with two trim rings at the piston knob, two cap bands, and a single trim ring at the section.  The cap top will have the single chick logo plated in 24K gold.  The M800 is 5.5 inches long, 6.5 inches posted, 0.52 inches in diameter, and has a weight of 0.99 ounces.  The ink capacity is 1.35mL. 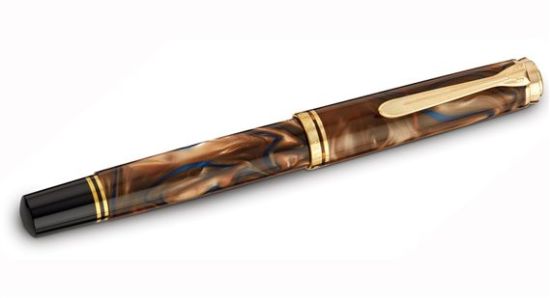 Pelikan describes the cap and barrel as being made of a high quality resin that is turned and then polished to a high sheen.  The color is that of a deep dark brown swirled with tan and a touch of blue which comes together to stunning effect.  There is no discrete ink window apparent in the promotional photos but I suspect that the barrel will have some translucency to facilitate viewing of the remaining ink level.  There is no word on a matching rollerball or ballpoint pen for this release.  Promotional materials indicate that quantities will be limited and that it will carry an MSRP of $850.  I would expect a street price in the United States of around $675-700.  Interestingly, I have only seen news of this pen from U.S. vendors at present (Goldspot Pens, Classic Fountain Pens, Pen Chalet, Dromgoole’s, Fahrney’s Pens) which might indicate that this is a U.S. focused release or just that news is first breaking amongst vendors in the states.  Packaging will be in the standard G15 gift box.

I’m very surprised at this announcement and I wonder how many people might now be second guessing their pre-order of the M805 Vibrant Blue.  Will you be getting one of these Grand Place M800s or hold out to see what Pelikan will come up with next?

UPDATE 1/9/16:  It appears that the M800 Grand Place will only be available for release in two countries.  The USA is one of them but the other remains unclear at this time.  It is my understanding though that Germany and the U.K. are not included.