Today’s post will explore the Pelikan M700 family of fountain pens.  This is a particularly interesting and unique series as it includes two Toledo models as well as several others plated with various metals.  The M7xx pens have the same dimensions as the M400 though with some added heft due to their metal construction.  The five pens that comprise this line are the M700 Toledo, M710 Toledo, M730, M750, and M760.  Most of these models were made in the 1980s and 1990s though some have been produced more recently.  As far as Pelikan pens go, these five are amongst some of my favorites for reasons which I hope will be clear by the end of this post.  They are not without their shortcomings, however, as I will try to point out.  Most of these pens are now out of production and some are quite hard to find.  Many will command a premium price if you do happen to stumble across one that’s for sale.  Read on to learn a bit more about the idiosyncrasies of each of these models.

The M700 was first introduced in 1986 and has enjoyed a production run spanning 30 years.  As such, these can be found in both old and new style variants that have included a lot of small changes along the way.  Consistent amongst all M700s has been the black resin cap, section, and piston knob with a barrel overlay made of sterling silver.  The gold tone comes from a fine gold plating applied on top of the silver.  Each pen has a green ink window and lacks a trim ring at the section.  Two thin, gold cap bands are reminiscent of the original Toledo design from the 1930s.  The gold plating of the clip and cap nut have a matte finish which is somewhat subdued.  The motif depicts different pelican birds and is done by hand, historically the work of one of three artists (initials CT, EH, & JB).  The band near the piston knob is marked with a unique serial and the engraver’s initials.

Made in small batches, Toledo pens have always varied slightly over time.  There may be small variations between pens such as the number of feathers in a pelican’s wing.  These small differences allow for a uniqueness not seen in a lot of other modern production pens.  The earliest examples of this model had monotone 18C-750 gold nibs, no sterling mark, and a piston knob without any engraving.  These are in fact some of the only Pelikan pens around to not bear the company name anywhere.  The nib sizes available early on included EF, F, M, B, BB, OM, OB, and OBB.  After a time, the rounded ends of the piston knobs were engraved with “Pelikan W.-Germany” and the ‘925’ sterling stamp was applied to the band near the piston knob.  Around 1990, the nibs became a two-toned 18C-750 gold and the year 2010 brought a 24 carat gold-plated cap top.

The M710 is a tad younger than the M700, having first been introduced in 1992, though is overall harder to find than its sibling.  Two distinct runs of this model exist.  There is the old style version made from 1992-1997 that has black resin components with a sterling silver overlay that lacks the gold plating of the M700.  The trim is silver colored and likely palladium plated.  The cap is more consistent with the modern Souveräns and bears two cap bands, the larger of which is engraved “Pelikan 925 Germany.”  The cap top has an etched, two chick logo.  These came with a two-toned 18C-750 nib and the ink window is green.  The piston knobs on several of the early examples bear the engraving “Pelikan W.-Germany” even when the cap band is only marked “Germany,” most likely a sign of the company using up old stock.  The silver overlay is done in the same Toledo style as the M700 but the motifs are distinctly different.  The ring near the piston knob is engraved with a unique serial and the engraver’s initials as well as ‘925.’

The line was revived over a period of three years via limited edition releases in the colors of the German flag.  These included M710s in Red (2009), Yellow (2010), and Black (2011).  These can be distinguished from the earlier models because their piston knobs lack engraving, they have two trim rings at the piston knob, and there is a special cap top for the red and yellow models.  The black version has the now standard palladium plated cap top.  The cap band on the special edition M710 is inscribed “Pelikan Ag 925 Germany Toledo.”

The M730 takes us away from the whimsical styling of the Toledo to something no less sophisticated in its appearance.  Complimenting a standard black barrel and green ink window are some very upscale sterling silver accents.  Made from 1993-1997, the sterling silver  piston knob and cap really make this pen stand out.  Both pieces have a guilloche pattern which gives a nice texture that suits the pen well.  The cap has a blank rectangle to allow for personalization.  I have heard that the sterling silver components are coated in a thin layer of rhodium plating to prevent tarnishing.  Sometimes this plating can chip off which can mar the pen’s appearance.  The nib is made from a two-tone 18C-750 gold.  The cap has a single cap band and is engraved “Pelikan 925 Germany.”  This is the only model of the entire series that had a matching ballpoint and rollerball.  You can see similar though distinct styling in the M420 that came out years later in the early 200os.

The M750 and its brother the M760 were designed to commemorate Pelikan’s Jubilee which occurred in 1988.  That’s 150 years as a company which is no small feat.  The M750 is done in silver plate with a barleycorn pattern and 24 carat gold-plated accents are seen on the clip, cap nut, and trim ring that adorns the section.  The ink window is green and the cap has a rectangular blank space for engraving.  These were made from 1988-1995 with the earlier pieces engraved “1838-1988” on their cap bands (full engraving reads “Pelikan W.-Germany 1838-1988”).  The engraving of the Jubilee dates was omitted later on in the production run.  These can be found with both 18C-750 and 14C-585 nibs in two-toned gold (both of which are correct to this model).  Each pen has a unique serial number engraved on the barrel near the piston knob.  Unfortunately, while they look stunning, these models are a bit more delicate which is likely secondary to thin plating on top of a soft, wear prone substrate.  I would exercise caution when posting and be gentle with regular use.

The M760 is very similar to the M750 with the exception of gold plating instead of silver.  All of the above comments about the M750 hold true for the M760.  Unfortunately, that includes the same concerns regarding durability as discussed above.  The M760 retains the same barleycorn pattern and overall trim style.  It too had the Jubilee dates engraved on early models and can be seen with both 14C and 18C nibs.  The M760 also had a serial number engraved at the piston knob.  Like many of these earlier models, nib sizes would have included EF, F, M, B, BB, OM, OB, and OBB. 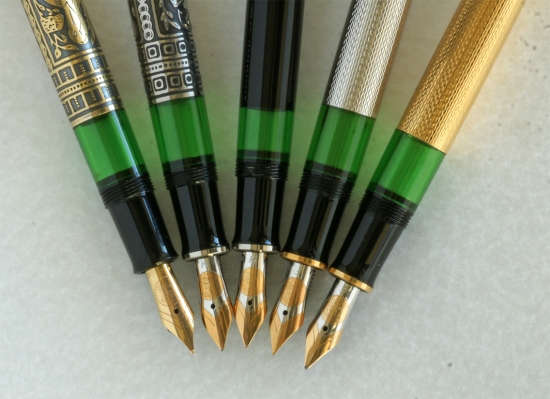 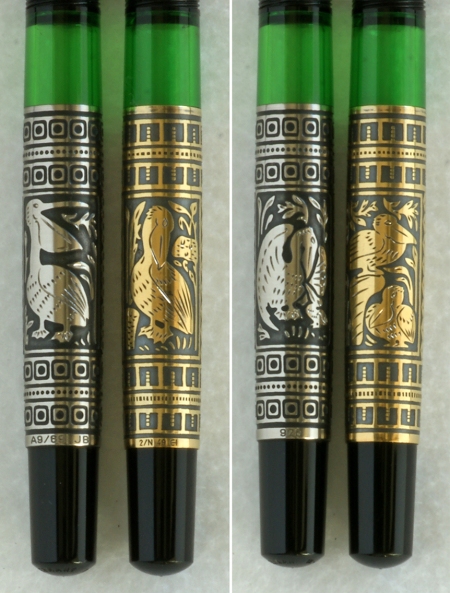