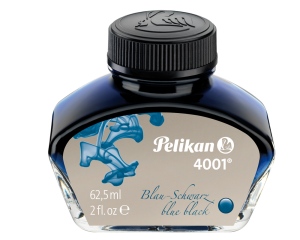 Few of Pelikan’s inks have sparked as much confusion and controversy as 4001 Blue-Black, particularly amongst those of us in the United States where this formulation is currently no longer available.  You may be unaware that Pelikan actually has a line of “document proof” inks which covers a spectrum ranging from strong permanence to a more moderate light resistance.  Scribtol is their most permanent offering but it is not suitable for fountain pens owing to the composition of the ink (i.e. soot) which can and will harm fountain pen feeds.  This formulation should be reserved for dip pens only.  Once you’ve moved past Scribtol, you arrive at Fount India.  Offered as somewhat of a compromise, Fount India also contains soot though in a lower concentration than Scribtol.  You get the same properties of permanence but in a formulation that is able to be used, all-be-it with caution, in a fountain pen.  If you employ Fount India in your piston filling fountain pen, you need to take care that the ink never dries out which requires diligent pen maintenance.  If the higher maintenance that is required with Fount India has you a little put off, then 4001 Blue-Black may be right up your alley.

4001 Blue-Black is touted as being light resistant while still being completely fountain pen safe.  It is well-regarded by many, not because of any unique color properties but because it is a non-staining, well-behaved, low maintenance, dry ink that can be used in older pens with little worry.  There has often been controversy over whether or not this formulation actually contains any iron gall.  Online ink forums are rife with threads about this topic.  If you look at bottles from the past you will see declarations that include “permanent” and/or “ferro-gallic.”  While today’s packaging omits such phrases, Pelikan’s own published literature does indeed confirm the presence of at least a small amount of iron gall in their Blue-Black ink.  The iron gall allows it to be more light resistant than any of the other inks in the 4001 line (though less than Scribtol or Fount India).  Despite the presence of iron gall in the mixture,  the special formulation allows it to be much more fountain pen friendly than would usually be the case with iron gall inks.  When in use, you will notice the ink is initially laid down as a blue-black color with strong tones of blue that fade to grey over time.  If ever exposed to water, the blue shading will wash away, leaving behind text that is still legible.

So what is iron gall and how did 4001 Blue-Black become an outlaw in the United States?  Historically, iron gall inks were intended for dip pens.  Because of the principle of capillary action upon which fountain pens operate, ferro-gallic deposits can accumulate in the feed system and result in clogging. Traditional iron gall inks were also very acidic, a property which could corrode metal pen parts.  Modern iron gall formulas contain only a very small amount of ferro-gallic compounds and are specially formulated to be more chemically balanced.  While those iron gall inks are labeled as fountain pen safe and can be used with relative ease, there needs to be a commitment to pen maintenance as problems can arise if the ink is left to dry in the feed.  The dye in today’s formula acts as a temporary colorant to make the ink clearly visible while writing. The ferro-gallic compounds gradually oxidize resulting in a color change to gray/black with the properties of light and water resistance.

Unfortunately, 4001 Blue-Black is not available in the United States and has not been since around 2011.  The reason for this now 5 year absence is in part due to the fact that the ink includes an ingredient(s) that is not listed in the United States Toxic Substances Control Act (TSCA).  That act stipulates that any chemical substance, mixture, or article containing a chemical substance or mixture (including microorganisms and mixtures) may be refused entry [into the United States] if it fails to comply with the TSCA, or is offered for entry in violation of section 5, 6, or 7 of the TSCA.  EPA and Customs Regulations (40 CFR 707.20 and 19 CFR 12.120, respectively) require that importers “certify” that imported chemical substances or mixtures are either in compliance with TSCA sections 5, 6 and 7 at the time of import or are not subject to the TSCA.  Penalties for failing to comply can be steep.  It has been presumed that 4001 Blue-Black contains a substance not amongst the approved chemicals as outlined by the TSCA.  While exclusion from that list doesn’t necessarily imply toxicity, I suppose that it made more economic sense for Pelikan to discontinue its United States sales rather than reformulate their ink.  There is no such prohibition of this formulation overseas where it is still readily available.

Pelikan 4001 Blue-Black has an almost legendary mystique about it.  If you search the online pen & ink forums, you will find many who extol its virtues.  Personally, I enjoy this shade and appreciate its light and water resistance.  It is a very well-behaved ink, even on low quality paper and I have not noted any damage amongst the pens that I have used it in.  If you are looking for a replacement from Pelikan here in the United States, Edelstein Tanzanite is your best bet but that ink is certainly nowhere near a direct substitute.  Pelikan 4001 Blue-Black has been successfully ordered from overseas vendors for importation into the USA but you do run the risk of any customs issues which may arise should your ink shipment be flagged.