Pelikan first announced their Collectors’ Box, a compact pen chest built to house up to 24 pens, three years ago with expected availability around April of  2015.  Production was repeatedly delayed due to manufacturing issues.  By late 2016, the boxes were finally making their way into retail channels.  You can see my review of that original box here.  Unfortunately, that stock was short lived and these again became scarce.  As of December 2017, Pelikan announced fresh availability which appears to be more widely distributed and reliable.  A close inspection has revealed that this new box is not the same as the original issue.  The differences are significant enough that I wanted to provide an update on just what has changed between the two versions.

To briefly review, the Collectors’ Box v1.0 was built to accommodate pens up to the M1000 size.  The dimensions are a compact 9.8 in W x 8.3 in D x 5.3 in H.  The construction consists of medium density fiberboard (MDF) covered with a wooden paper which is protected by a layer of clear lacquer.  The three trays (each holding 8 pens) are covered with a cream-colored faux leather and the top of the box is made from 4mm thick safety glass.  The bottom of the chest has rubber feet to ensure that the box won’t mar the surface that it’s placed upon.  The Pelikan logo is printed on the front of the chest and duplicated on the upper right corner on the back side of the box. 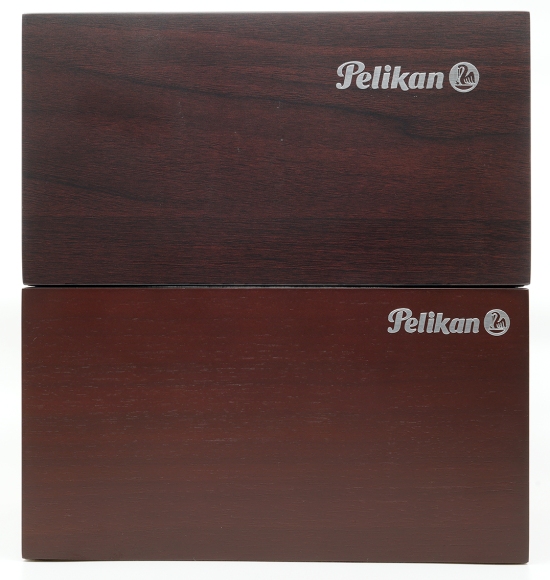 So what new features does the Collectors’ Box v2.0 bring to the table?  Most of the changes are subtle and you have to scrutinize the two versions to know what they are as they can be missed with a casual glance.  Both boxes retain the same dimensions and overall styling.  The most notable change is that the new version is covered with a real wood veneer made from American Walnut versus the wood paper of the first edition.  This will likely translate to better durability of the finish.  Both are composed of medium density fiberboard (MDF), a high-grade composite material made from recycled wood fibers and resin that is more stable than solid wood and stands up better to changes in heat and humidity.  This newer finish has a lighter, more reddish hue and, while  I tend to like the darker finish of the first version, I appreciate the better quality and durability of the newer finish.  The next big change is the way that the faux leather is placed around the tray.  In the first version, the leather only covered the sides of the individual slots, leaving the bare wood of the top and bottom of the drawer exposed.  The faux leather now covers the entire tray, an adjustment that will likely better protect the bottom and top of your pens from being scratched.  The third difference is the size of the Pelikan logos emblazoned on the front and back of the chest.  The original version has a logo that measures 2.77 x 0.63 inches whereas the new logo is a trim 2.37 x 0.53 inches.  The remainder of the components such as the plexiglass top and the drawer pulls remain unchanged.

Pelikan Collectors’ Box v1.0. The arrows indicate seams visible in the lacquered paper finish. This short lived version is overall darker in color with a larger sized logo and less padding in the pen drawers.

One final difference between the two Collectors’ Boxes is the price.  The German MSRP (including VAT) for the original version was €220 whereas the newest version comes in at €270.  The new pricing represents a 22.7% increase in the suggested retail price from one version to the next.  Interestingly, the US MSRP price of $425 remains unchanged between the two versions, likely because there is no room to increase given the already exorbitant pricing.  That MSRP gives us a US retail price of about $340.  If you’re looking to own one of these, the best deals are to be had overseas where US customers can get one for around $265.  After looking at the two versions of the box side by side, my original opinion still stands.  These are elegant though expensive pen chests but I think that the various modifications are certainly for the better.  While you can likely find a superior value for the money elsewhere, I think the small foot print and simple styling is hard to beat.

The new v2.0 pen tray. The arrows indicate the addition of faux leather along the sides of the tray, better protecting your pens from scratches.