I thought that it might be fun to explore a trio of pens that we don’t get to see nearly often enough.  Many of us are intimately familiar with the M400 that revitalized Pelikan’s fine writing fortunes back in 1982.  That model continues to be a cornerstone of their line-up today.  Over the years, there have been many special editions based off of the M4xx chassis.  Three in particular come to the forefront of my mind due to their silver embellishments.  The trio of loosely related models to which I allude are the M420, M425, and M430.  While the same length and diameter as your standard M400, they carry some extra weight due to the inclusion of sterling silver elements in their construction.  These pens were manufactured between the late 1990s and early 2000s.  Each Souverän mentioned here stands out amongst their lesser decorated siblings and I assure you that they look much better in real life than these photos depict.  One pitfall to be aware of is mistaking one of these with the M730, an earlier model that sports a very similar shape and construction but is easily distinguished when you know what to look for.  Now long out of production, all of the pens mentioned here are rather hard to find in today’s secondary markets which means that when you do find them for sale, they are usually much more expensive than your standard M4xx model.  Read on to learn more about these silvered Souveräns.

The M420 is actually the middle child of the lot having first been released in 2004.  Other notable pens that year included the M400 Tortoiseshell White, the M450 Green Vermeil Tortoise, and the M620 Shanghai.   The M420 was produced from 2004 until 2007.  It has a black resin barrel with a green ink view window just behind the cap threads.  There is a silver trim ring at the section and the nib is made of a two tone 18C-750 gold.  Both the cap and piston knob are sterling silver with a fine pattern of lines engraved along the lengths of both.  The company’s traditional trim rings and cap bands are also worked into the silver and the cap top depicts Pelikan’s single chick logo.  The cap band bears the inscription “Pelikan Souverän Germany.”  Pelikan’s beak clip and a blank space for an engraving round out the cap’s features.  The M420 has a bit of a doppelgänger in the world in the form of the M730 which I will touch on in more detail below.

The M425 was released one year after the M420 in 2005 and was only available as a special edition for that year.  Of the three models, this one is the most commonly found in my experience but that is not to say it turns up with any type of regularity.  It is certainly the oddball of the lot.  Instead of black resin, the M425 prominently features a dark green translucent barrel making it more of a demonstrator of sorts.  This styling is similar to the Blue, Red, and Aubergine models of the M625 line which were released over three years starting in 2006.  The nib of the M425 is a monotone plated 18C-750 gold matching the finish and there is a single silver colored trim ring at the section.  The cap and piston knob are again done in sterling silver, this time with lines engraved around the circumference which get progressively farther apart from their origin.  The cap top depicts Pelikan’s single chick logo and the side of the cap has a blank space adjacent to the beak clip to facilitate personalization.

The M430 was actually the first of the three models to have been released.  It came out in 1999 alongside the M630 which had the exact same styling but in the larger size of the M6xx line.  Like the M420, this one has a black resin barrel with a green ink view window, single trim ring at the section, and a two tone 18C-750 gold nib.  Unlike the other models discussed so far, this one has a standard resin piston knob in matching black and features Pelikan’s typical double trim rings plated in gold.  The cap is sterling silver, however there is gold plating adorning the crown, beak clip, and cap bands which gives this one a bit more of a distinctive look when compared with the others.  Like the M420, the cap is engraved with lines along its length, though spaced a bit further apart, and leaves a blank space for personalization.  Due to production prior to 2003, the cap top depicts the company’s older two chick logo.

We previously explored the M730 in detail when discussing the M700 series.  This model was produced from 1993 – 1997 making it older than all of the pens detailed above.  Despite having an M7xx designation, it is actually the same size as the M400 line and is characterized by a black resin barrel and green ink view window with a sterling silver cap and piston knob.  The nib is also a two-tone 18C-750 gold though with the older styling of the early 90s.  This description could easily be mistaken for an M420 but a discerning eye can quickly pick out some telltale features.  Perhaps the quickest and easiest tell is the cap top which is made entirely of metal on the M730 and is plastic on the M420.  Of course the two will also have different logos, the former with a two chick version and the latter with the current, single chick version.  Moving from there, the M730 lacks some of the more ornate embellishments such as the stylized trim rings that we see on the M420.  The pattern on the cap and piston knob of the M730 is also a bit coarser and the ink view window is overall a lighter shade of green.  Once you know what to look for, the two are easy to tell apart but, on first glance, those things can be easily missed. 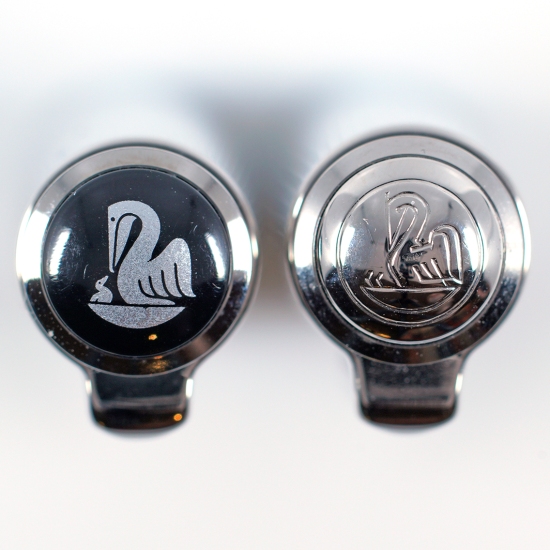 Left to right: M420 and M730 cap tops. Note the all metal construction of the M730 and the difference in logos reflecting the change in design that occurred in 2003 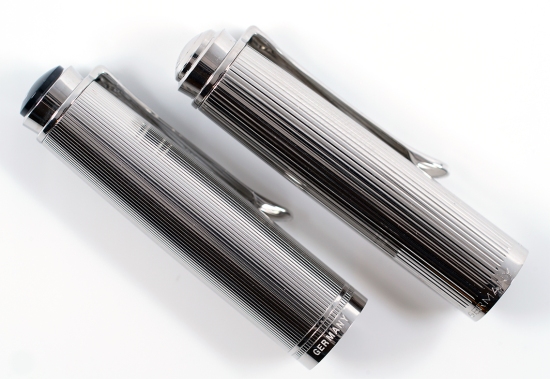 Left to right: M420 and M730 caps. Notice that the pattern is coarser on the M730. The cap bands are also subtly different between the two models 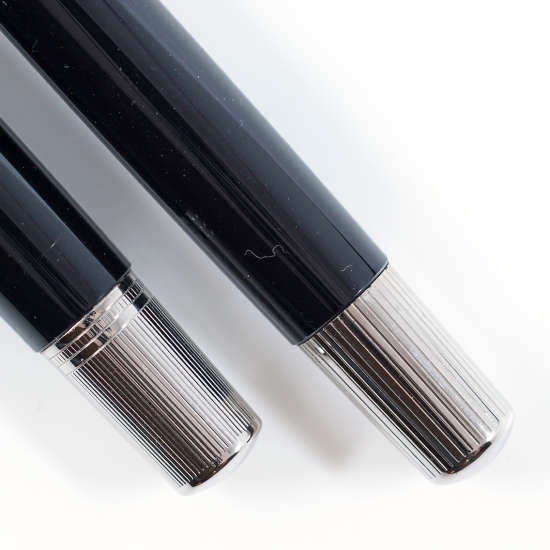 Left to right: M420 and M730 piston knobs. Again pay attention to the difference in the pattern as well as the presence of stylized trim rings on the M420

The M420 ink view window (bottom) is much darker than what is found on the M730 (top). You can also appreciate the change in styling of Pelikan’s nibs that occurred in the late 1990s 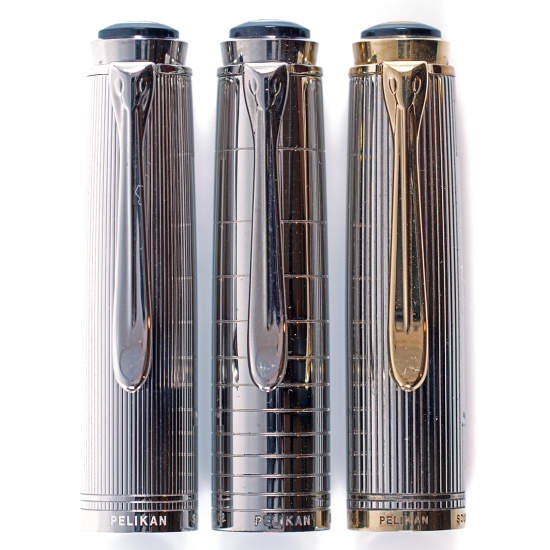 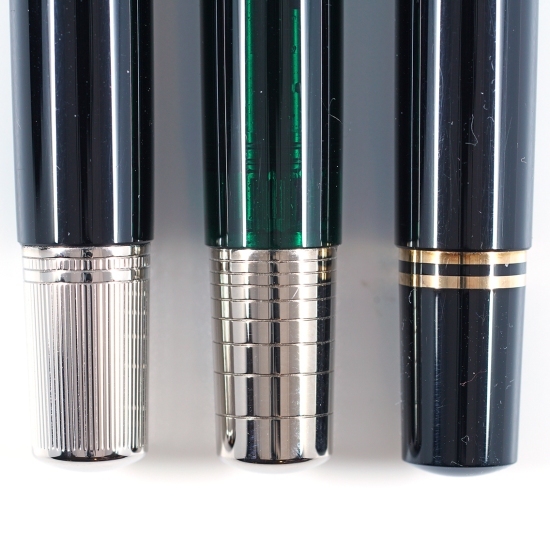 Pelikan M420 cap. Note the blank space on the side to facilitate a personalized engraving.  Each of the caps are marked “Ag 925” to indicate that they are sterling silver 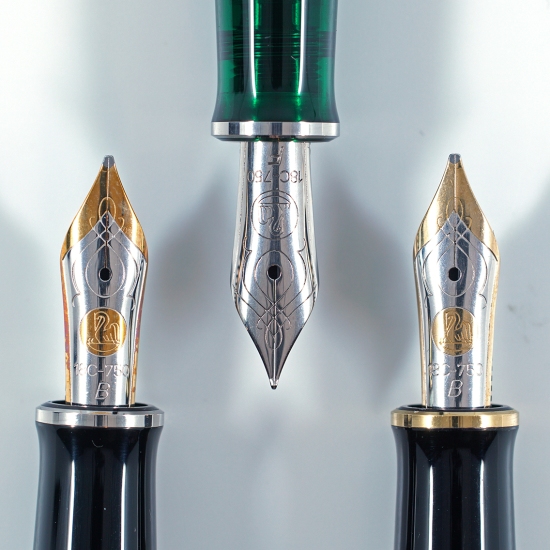