The M800 Demonstrator has had an interesting life.  It was first released in 2008 as a special edition to celebrate the company’s 170th anniversary and it came in two forms.  The first of these was a standard demonstrator in clear, transparent resin that lacked any embellishment on the barrel or cap.  The clear resin allowed for unobstructed viewing of the brass piston assembly which was complimented by Pelikan’s standard gold plated trim.  At the same time, another model was released, identical to the first save that this one featured etched descriptors of the various parts filled in with white paint.  These pointed out key features such as the spindle nut, twist stopper, and piston to name just a few.  Eight attributes in all were labeled along the barrel and piston knob.  Interestingly, this particular model featured a cut out in the brass connector of the piston assembly to allow for better visualization of the spindle within the connector, making it a true demonstrator pen.  When the same features were incorporated on an M805 variant in palladium trim in 2015, this little detail would be left out.  Most of the etched variants were annotated in the English language while a small minority would be done in Spanish.  Niche Pens once declared that, “Altogether, 3,500 Clear Demonstrators were produced, the majority with English engravings, a small number with Spanish engravings and an even smaller number with no engravings at all.”  While the veracity of that statement cannot be verified, it further imbues the M800 Demonstrator with a bit of mystique.  Both pens were readily available in their time but have been out of production for about twelve years now and are infrequently encountered.  This model is not without its fair share of intrigue and new developments for 2020 make it worth revisiting.

The tale outlined above seems pretty straight forward but the story doesn’t end there.  We have additional variations seen in the wild that were never intended for the market.  The first of these is the infamous Spanish model, uncommon in themselves, amongst which there exists a few examples that sport what is considered to be a mistake.  This model’s engravings are done in the Spanish language and the word “Empuñadura” is engraved on the piston knob which is supposedly not the intended description.  As the story goes, 25 of these mislabeled models were made before the error was identified and production stopped.  Pelikan was able to recall six of them resulting in 19 of the erroneous pens remaining in the wild.  Another permutation that has been found was re-sold by Martini Auctions back in 2012, this one sporting German imprints, likely a prototype that never saw large scale production.  These rare misprints and prototypes can command quite a sum when encountered on the secondary market.

While these oddities are indeed fascinating, they are now eclipsed by a new development in the M800 Demonstrator saga.  For 2020, it appears that Pelikan has released a limited edition of 1000 etched M800 demonstrators exclusively for the Chinese market.  Officially labeled as the “M800 Demonstrator – Chinese Edition,” each pen bears etchings in either traditional or simplified Chinese which labels the various components in the same way as its predecessors.  Unlike the 2008 model, this version lacks the cut away on the piston assembly and the cap top is now gold plated.  Those features and the Chinese markings aside, the pens otherwise appear identical.  That means there are two trim rings on the piston knob, two bands at the cap lip, and one ring at the section.  The cap band is inscribed “Pelikan Souverän Germany” and the pen is equipped with an 18C-750 two tone gold nib.  All of the furniture is plated in 24 carat gold.  This impressive pen also comes with some unique packaging.  To start, there is a large, thin and somewhat nondescript outer white box with the Pelikan logo.  That gives way to an inner sleeve housing a green book with gold lettering along the spine and the company logo on the front.  The book opens to reveal a recess within which the pen resides.  A small green manual completes the package.  These look to be going for around 4200 Chinese Yuan which is roughly equivalent to $600.  If you want to pick one up and don’t speak Chinese, you’d do well to get an agent to shop for you on Taobao.  While I cannot find any official documentation from Pelikan, this new model for all the world looks to be legitimate and another example à la 2019’s King Michael I of Romania of a release with a regional hyper focus.

2008 – Plain and etched versions of the M800 Demonstrator are released featuring gold plated trim.  The pens are labeled in both English and Spanish.  Erroneous examples of the Spanish version are created, inadvertently resulting in a rarity.

2012 – A likely prototype variant of an M800 Demonstrator with etchings written in the German language and previously found at a pen show was sold at auction.

2015 – Plain and etched versions of the M805 Demonstrator are released featuring palladium plated trim.  This model lacks the cut away on the connector and the attributes are labeled in English only.

2020 – An etched version of the M800 Demonstrator limited to 1000 models is released in China with labels in both simplified and traditional Chinese.  This model also lacks the cut away on the connector. 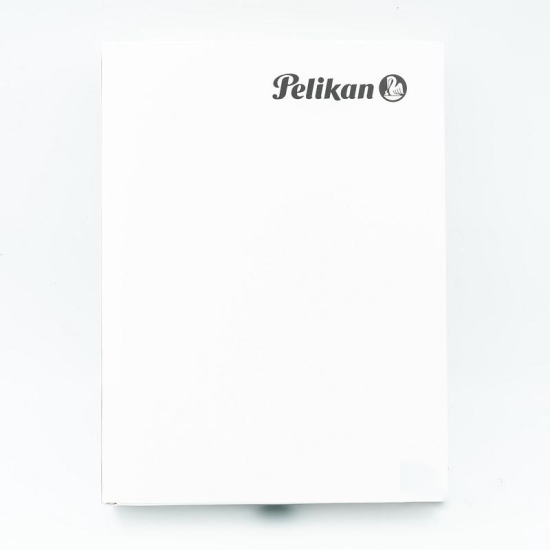 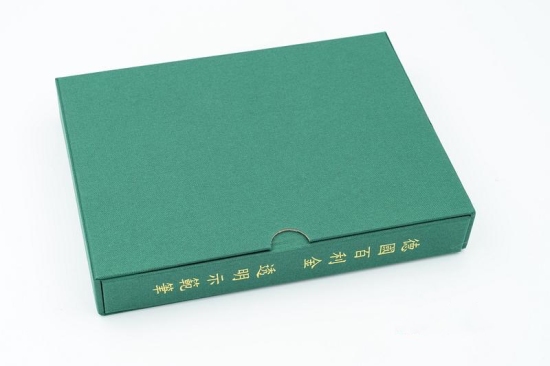 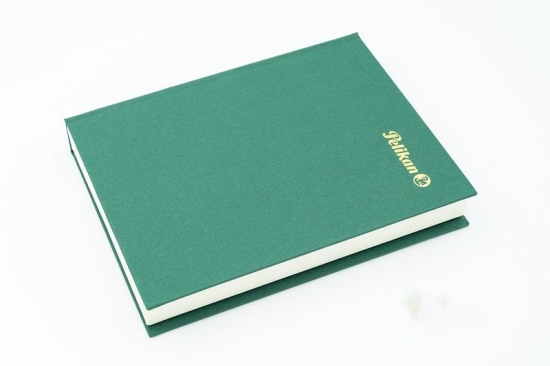 Faux book in which the pen resides

Manual included with each pen 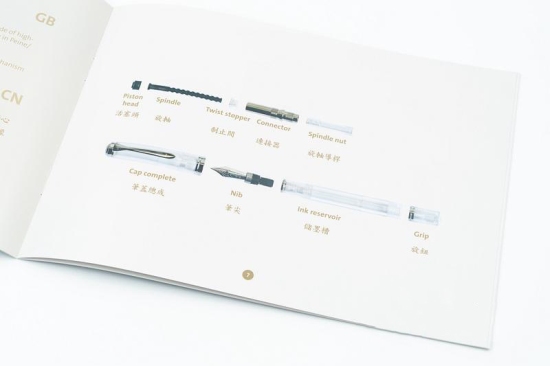 A look under the cover reveals the pen 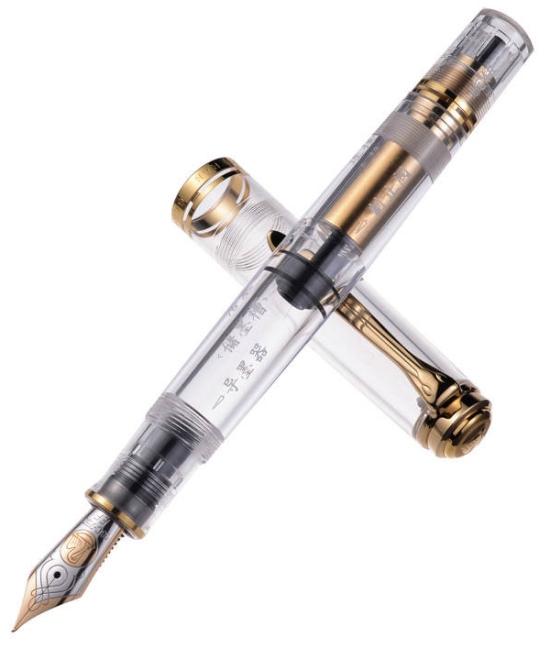 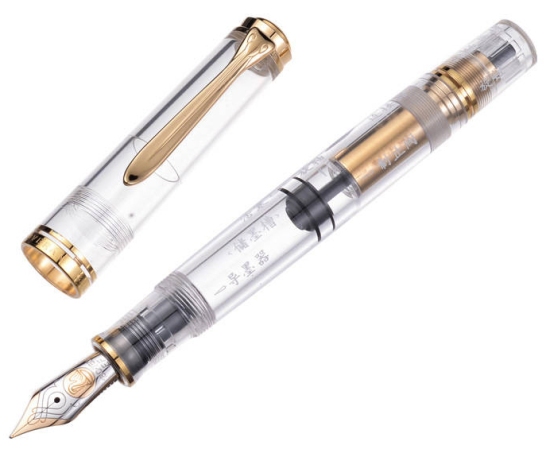 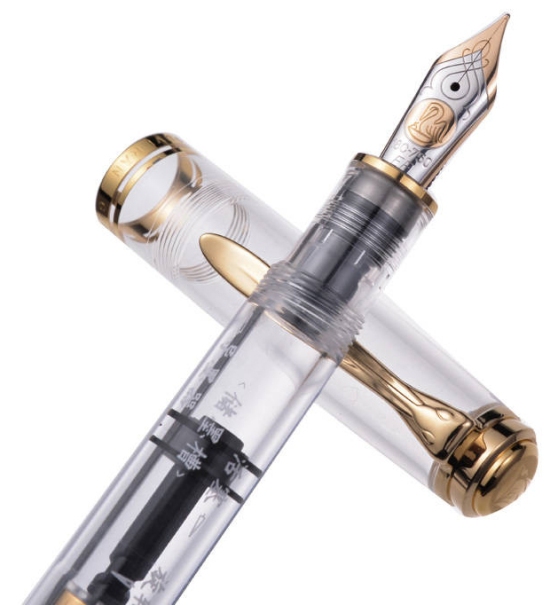