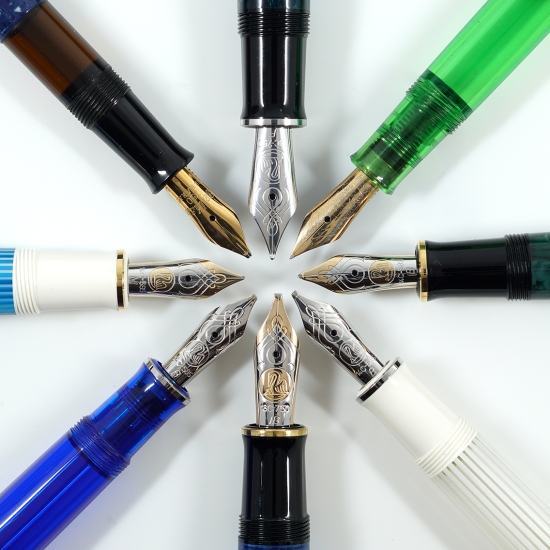 It has been five years now since Pelikan discontinued the production of their most interesting nibs.  The sizes lost to us include the BB, 3B, OM, OB, OBB, and O3B nibs not to mention the more exotic IB and I variants.  If all of those letters amount to alphabet soup for you, you can check out my post explaining Pelikan’s nib designations here.  What we have been left with is the staid though faithful line-up of EF, F, M, and B sizes.  In many of my posts, I have lamented the lack of character found in today’s nibs.  The current philosophy behind Pelikan’s modern stock offerings seems to focus on providing a reliable though unvarying line, good for novices and advanced users alike.   This “one-size-fits-all” mentality may suit the market but can leave the advanced user somewhat uninspired.  What you get out of the box today is referred to as a round nib which produces the same line width on the cross stroke as it does on the down stroke.  Modern nibs are wide and wet thanks to Pelikan’s generous feed but there is little to no character imparted to the writing.  Contrast that with the nibs of yesterday, those from Pelikan’s early days through the mid-1960s, which provide a writing experience which I would argue is second to none.  While I appreciate the focus on dependability, I do sometimes miss the excitement that a good nib can lend to the writing experience and thereby elevate the text beyond mere words on the page.  Another theme that you may have seen me return to time and again is the generous and sometimes blobby amount of tipping material on Pelikan’s modern nibs.  What this allows for is a robust canvas for a custom grind.  There are many accomplished nib meisters out there, specialists with an expertise in nib adjustments.  They can help your nib achieve a sorely missing degree of character and I wanted to highlight for you just what can be done.  Now I tend to be a traditionalist and a purist and don’t often favor customizing my nibs but I have opened up to the notion and have been handsomely rewarded.  If a reliable, unvarying line suits you just fine, then read no further.  If you’re at all curious to learn how you might breathe new life into a boring nib then read on.

There are several different grinds out there and not all of them are suited to every writer.  Different nib meisters may even offer proprietary grinds that only they provide but there are a core number of grinds that just about any specialist can set you up with.  These core grinds include the round nib, the stub, the cursive italic, the oblique, and the architect.  It can be confusing when you first dive in, a situation made worse by the fact that many of us don’t have the ability to sit face to face with our chosen nib meister ahead of time.  It can be difficult to entrust a perfectly good nib to someone, not quite knowing what the end result will be.  Hopefully this primer will help allay some of your anxiety.  For completeness, I will also make mention of the stock italic nib options that Pelikan has made available over the years.  While these stock nibs carry an exotic label, they actually tend to lack the degree of line variation which you might otherwise be able to achieve from an actual custom grind.

**Click on any of the images below to enlarge. 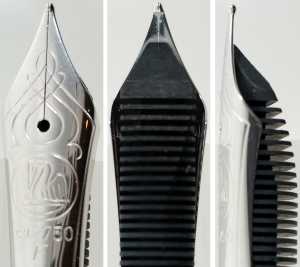 The round nib is basically what you get “out-of-the-box” when you purchase a new Pelikan fountain pen.  This tip generates a cross stroke with the same width as its down stroke.  The rounded design makes it very forgiving and easy to write with allowing it to appeal to a broad audience.  While you may not mind the lack of variation, you may not like the fact that the fine nib you just bought writes more like a medium or that the medium may put down a significantly bolder line than anticipated.  If that is the case, a nib meister can reduce the size of your nib to something more to your liking and even produce a size not available from any of the company’s stock offerings.  This size reduction is probably the simplest of the grinds out there. Please note that while a nib can be taken from a larger size to a smaller one relatively easily, the converse is not true unless additional tipping material is added, a service that not everyone provides.

The stub nib is created when the circular tipping is ground into more of a rectangular shape.  The outer edges are then rounded off thereby preserving much of the smoothness that the traditional round nib is known for.  This seemingly small adjustment allows for a thin cross stroke and a thicker down stroke.  The exact dimensions can vary depending on the amount of starting material and the effect that you’re trying to achieve.  That said, there is a floor as to how small you can go with this one before you essentially lose the line variation.  This is the most user friendly of the custom grinds because it imparts some nice variability to the line width while preserving much of the smoothness of the round nib.  If you’re just starting to explore the world of custom grinds, this is a good one to try first.

The cursive italic nib plays on the stub concept with the squared tipping but does not round off the edges which are left a bit more sharp.  The effect is that the cross stroke of the cursive italic is thinner than that of the stub while still creating that thicker down stroke.  The sharper edges do result in a bit less smoothness than the stub and requires a little more care as to the nib’s orientation when writing.  These can be ground somewhat smaller than the stub while still preserving a noticeable line variation.  If you want to take this concept to the extreme, there is also the sharp or crisp italic variant which has extremely sharp edges that results in a more toothy feel but allows you to achieve maximum variability.  These are not well suited for daily writing and have more of a place in calligraphy.

Oblique nibs have been around forever and were part of Pelikan’s stock line-up until five years ago.  There are left foot obliques (commonly referred to as “oblique”) and right footed obliques (known as “reverse oblique”) that basically compensate for writers who rotate their pen.  An oblique tip is usually cut 15 to 45 degrees from the horizontal.  This type of grind is good if, for example, you are a right handed writer who rotates the pen counter-clockwise.  These are not intended to impart significant variability in and of themselves but they can be customized and ground to an italic or a stub if so desired.  For instance, with a left foot oblique, an italic grind done at an angle matching the angle of the pen in relation to the direction of the writing will come out like an architect with a thicker cross stroke and a thinner down stroke.

The architect nib (also know as the Hebrew or Arabic nib) basically takes the concept of a stub and rotates it 90 degrees thereby creating thinner down strokes and thicker cross strokes.  The uniqueness of this grind means that some care must be taken to hold the pen at the proper angle to the paper so it is especially important to discuss at what angle you hold your pen such that the grind will be to your liking.  Notice in the example below that the diagonal line is actually the thin stroke which may seem contrary to the above but actually has to do with the angle of the pen in relation to the direction of the writing (two little children under foot means that the writing examples in this post were literally done in a stairwell so the angle of writing was less than ideal ¯\_(ツ)_/¯). 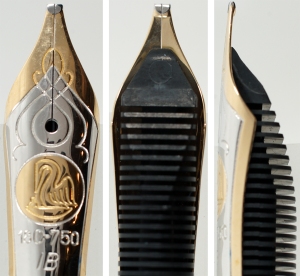 In July of 2010, Pelikan released a stock nib in italic broad for its M800 line.  While it is nice to see this kind of effort from the company, the labeling is a bit misleading.  It has been my experience that these nibs offer broad lines and a smooth writing experience consistent with a more stub like behavior rather than a true italic.  The downstroke is about 1.5mm with a cross stroke of 0.5mm.  The factory offerings are usually less likely to achieve the same degree of line width variation that you would otherwise get with a comparable custom grind.  These are currently no longer in production. 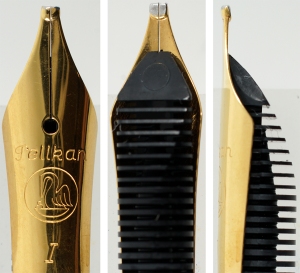 Sometime around 2008, Pelikan released a stock nib in an italic medium for their classic M200 line.  These are gold-plated stainless steel nibs simply stamped with an I.  While not as broad as the IB of the M800, the italic medium also acts more like a stub than a cursive italic grind.  You can still find these for sale from time to time but they are no longer widely available.

Should you choose to opt for one of the above customizations, you should be prepared to answer a few questions in order to optimize your experience.  A good nib meister needs to know a few details before getting to work.  While the best experience is likely to happen at a pen show where you can sit directly across from your nib specialist, that is not always practical for a great many of us.  In either scenario, common questions that you may be asked include;

One final thought to leave you with is that a custom grind doesn’t have to break the bank.  Most specialist charge between $30-45 depending on the job to be done.  While this expense is added to the outlay already made for the pen, the added enjoyment derived from a custom nib is money well spent.

For your reference, I will include a list of accomplished nib meisters below;

**The above list captures many of today’s nib specialist but is not meant to be all-inclusive.  Inclusion on this list should not be taken as an endorsement just as exclusion from this list does not constitute a slight to anyone I may have forgotten.  This is simply meant as a starting point for your nib grinding needs.