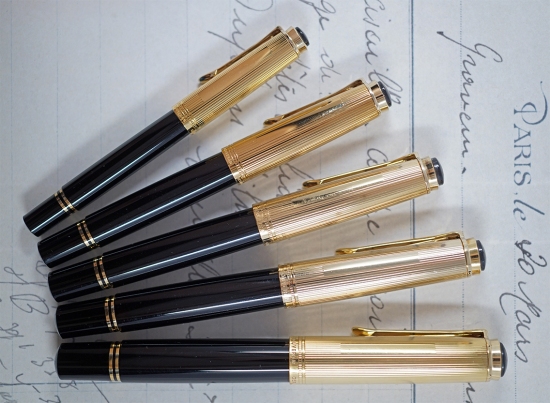 In the late 1990s and early 2000s, Pelikan introduced a series of special editions across their Souverän lines that employed sterling silver components decorated with a gold overlay.  The gilding of silver is often referred to as vermeil, a French term that is actually pronounced “ver-may.”  By plating sterling silver in such a way, an item can be imbued with a gold appearance at a fraction of the cost of pure gold.  This should not be mistaken for simple gold plating.  There are regulations that oversee what may be called vermeil in many jurisdictions.  For the U.S. market, the base metal must be sterling silver with a gold coating of at least 10 carats or finer and with a thickness of 2.5 microns (1/10,000th of an inch).  Mere gold plating has no such industry regulations.  These upgraded Souveräns have a guilloche metal cap but otherwise maintain the same visual appearance and trim as their less gilded siblings.  Each fountain pen in the series is referred to as an Mx50 and there have been nine such models over the years in addition to several companion pieces.  Care should be taken not to confuse these with the M150 and M250 of the Classic series or the M750 anniversary edition which do not have any vermeil components. 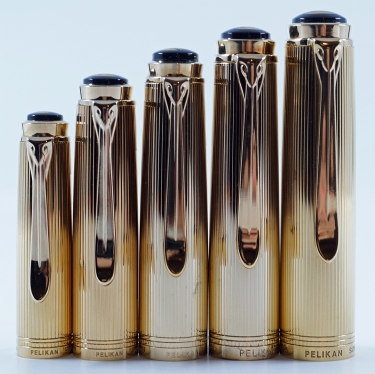 These vermeil beauties are really only distinguished by their metal cap and 18 carat nibs.  They all sport the same guilloche pattern on the cap with a blank plate on the side to facilitate a personalized engraving should one desire.  The cap lip has a band around its circumference and the area above the lip is engraved “Pelikan Souverän Germany Ag925,” a stamp that denotes the underlying sterling silver.  All of the cap tops, except for the M450 Tortoise, will display the older, painted two chick company logo.  The nibs are all 18C-750 gold, even on the smaller Souveräns for which that isn’t the usual standard.  There isn’t much more to say about the series as a whole but it is worth highlighting a few anecdotes.  In general, production ran from 1997/98 until 2001.  The M450 Light Green Tortoise is the notable stand out.  It is an outlier of sorts because it came out several years later than the other models, was the only pen done in a tortoise finish, and included a vermeil piston knob.  Many of the fountain pens were available with a companion ballpoint, rollerball, and/or pencil.  Interestingly, the black K450 and K650 ballpoints were the same size/design.  The same holds true for the black D450 and D650 pencils.  Perhaps the only other thing worth pointing out is the large selection of available nib widths that would have accompanied these.  Unlike today’s offerings, Pelikan’s line of factory nibs contained a lot more variety than what we see today.  You can see the different models highlighted in the table below.

*The black K450/650 ballpoints and D450/650 pencils were the same writing instrument with different designations.

One last thing worth mentioning is just how to properly care for a piece of vermeil.  It is recommended to avoid exposure to cleaners and harsh chemicals which can damage the finish.  Buffing the cap gently with a microfiber cloth is all that is usually necessary. Doing otherwise might result in stripping off the gold finish.  When not using your pen, storing it in an airtight container can help prevent oxidation though that is not a necessity.  The outer gold layer will also protect against this but, over time, the gold layer is likely to tarnish.  A jeweler’s polishing cloth or some mild soap and water are usually all that’s needed to remedy the tarnish though you are free to leave it as it can add a unique sense of character to the pen. 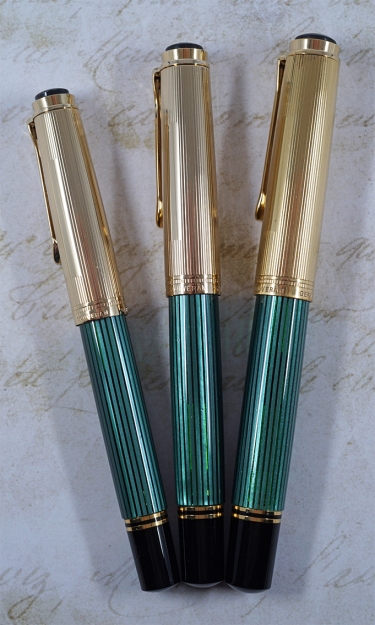 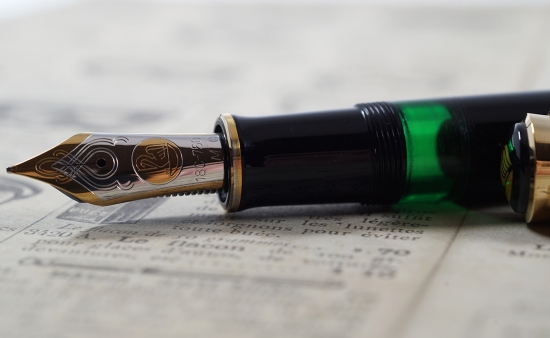 Black M1050 Vermeil Souverän fountain pen. All of the black models have the same features and vary only in size 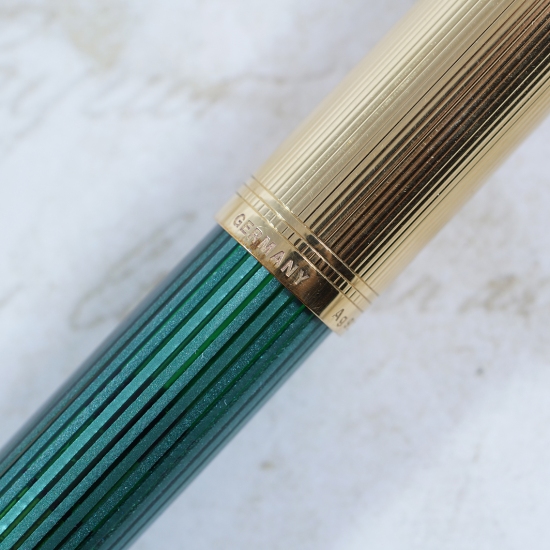 While resistant due to the plating, tarnish can still develop over time as can be seen here below the word “Germany” on the cap lip