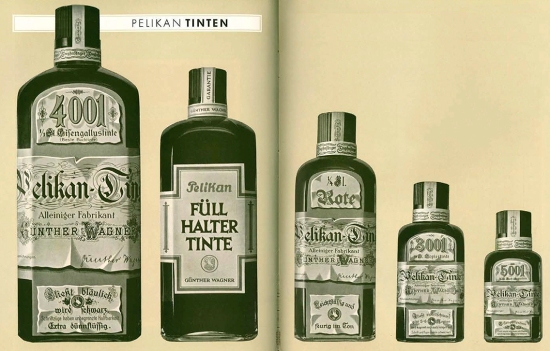 The firm now known as Pelikan and it’s founder, the chemist Carl Hornemann, were chiefly involved in the manufacture and sale of various oil paints, watercolors, and colored inks with official operations beginning in the Spring of 1838.  Long before Günther Wagner ever conceived of producing a fountain pen, the business had a prolific catalog of ink tailored to suit just about any purpose you could imagine.  The broadest categories of usage included inks for copying, inks for writing, and colored inks.  Günther Wagner purchased the business in 1871 and by 1886 the company was producing 49 different varieties of ink with a spectrum of properties ranging from indelible, to washable, and even to scented inks marketed towards women to name just a few.  These inks were advertised under the Pelikan name which Günther Wagner had registered as a trademark in 1879.  A comprehensive review of all the once available formulations would be quite the endeavor and is beyond the scope of this article.  There are a few related product lines, however, that are worth taking a closer look at.  Starting in the late 1890s in an effort to provide more clarity in their marketing, some of the most important “Pelikan Inks” would come to be trademarked with specific numbers, a convention which was meant to allow for easy recall.  This was necessary since the company’s price lists from that decade took up 17 pages detailing the available ink varieties alone.  These numbered lines included Pelikan Ink 2001, 3001, 4001, 5001, and, later on, 6001.  The aforementioned formulations came about during the early days of fountain pens, before widespread adoption, and were produced concurrently with many other product lines.  Only the 4001 name, historically one of Pelikan’s most popular products, continues on today albeit with a different chemical composition from the original.  What properties did these inks of old display and how were they used?  Read on to find out.

At their core, most of the ink varieties being produced by Günther Wagner could be distilled into one of three categories.  These included iron gall (ferrogallic), logwood, and dye based inks.  Each category contained its own set of characteristics.  Günther Wagner came to add iron gall ink to its catalog sometime around 1892, in part due to the emerging dominance of the steel nib.  This new formulation imparted a permanence to the writing and also made it relatively easy to reveal any alterations in the text which made it superior for many applications.  Its popularity was bolstered after it was adopted and endorsed by the government for use in official documents.  Prior to this, logwood derived inks were the predominant formulation though these suffered from fading over time.  Iron gall ink, as the name implies, was made with iron, tannic acid, and gallic acid derived from gall nuts.  Günther Wager manufactured this ink in two grades, class I and class II, based on the acid and iron content.  Class I was a premier document ink containing 27 grams of tannic and gallic acids and 4 grams of metallic iron per liter.  Class II was a less expensive and more general iron gall writing ink containing 18 grams of tannic and gallic acids and 2.6 grams of metallic iron per liter.  Each class served a different niche in the market of its day.  These would oxidize on the paper with time which is what gave the text its permanence.  The logwood inks were derived from the campeche tree found in Central America.  Like the iron gall inks, these too would darken on the paper with time but were not quite as permanent as their ferrogallic counterparts and, once iron gall had become widely available, were only recommended for documents without any lasting value.  The final category was made of ink derived from dyes with the addition of a number of other chemicals.  This product group allowed for a much wider variety of colorful shades, the tradeoff being the lack of permanence. 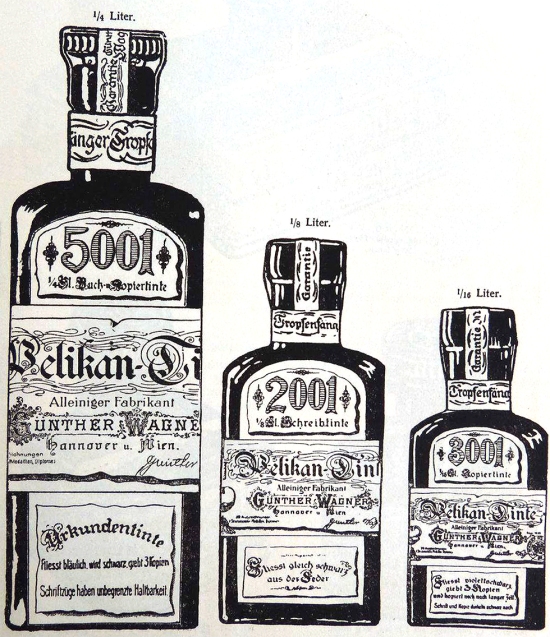 With their uses and the core formulations delineated, we can move on to some of the specific trademarked product lines put out by Günther Wagner in the late 1800s and early 1900s.  These are outlined in the table below.  Price list number 30B from 1913 states that only four types of ink are needed; a black writing ink (2001), a blue writing ink (4001), a copying and bookkeeping ink (5001), and a copy only ink (3001).  Retailers were asked to ensure that the right variety was allocated for the correct purpose.  In doing so, Günther Wagner felt that; “Hardly anyone who, after using the Pelikan ink once, will use other types of ink again.”  The literature goes on to detail the superiority of the product though there was concern about corruption by the end-user that could impact performance.  An eight point guide which detailed the proper handling of ink post-purchase was made available to retailers.  If followed, Günther Wagner guaranteed the usability of all of the company’s inks down to the last drop. 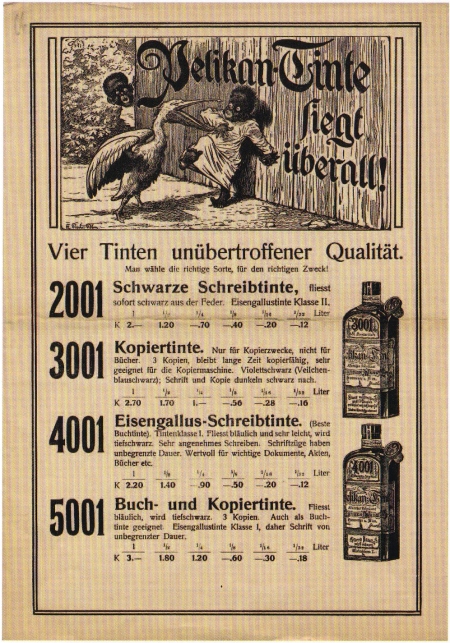 An advertisement for Pelikan Ink circa 1900. The ad states “Four inks of unsurpassed quality” and plays upon some of the racial tropes prevalent at the time 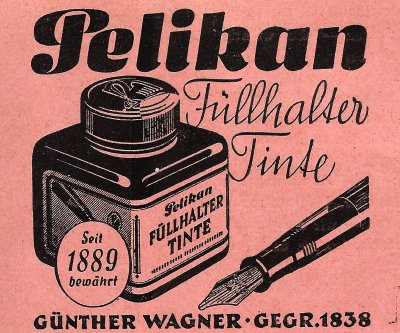 All of the above inks were made specifically for dip pens (a steel nib mounted in a handle/holder) which were the predominant writing instrument of the time or copying devices.  Günther Wagner introduced the company’s first fountain pen friendly inks in 1889, five years after the first commercially viable mass-produced fountain pens came to the market.  Ink production was largely stable until World War II when, circa 1941, ink had to be supplied in recycled bottles (e.g. wine bottles).  By the end of the war, the variety of available inks being produced was a mere shadow of its former self.  Of the numbered lines of Pelikan Ink, only 4001 would continue on in the post-war period.  By the early 1950s, the major fountain pen inks were Pelikan Füllhalter-Tinte, an iron gall ink meant for documents and safe for fountain pens, as well as Pelikan Farbige Füllhalter-Tinten, a line of fountain pen friendly colored inks that lacked any permanence.  Available colors included Royal Blue, Brilliant Blue, Brilliant Black, Brilliant Red, Brilliant Violet, and Brilliant Green.  These would become the core colors later folded into the newly expanded 4001 line sometime by the early 1960s.  These inks remained fountain pen friendly and, unlike the prior defining feature of 4001, were devoid of any significant iron gall content.  4001 Blue-Black remained the only ink in the line-up to have continued production with any quantity of iron gall and therefore most closely resembled the original formulation of the late 1800s.  That ended sometime in the late 1980s with only a very small amount of iron gall content remaining in today’s formula which is currently touted as providing some semi-permanence, a far cry from the archival document ink of old. 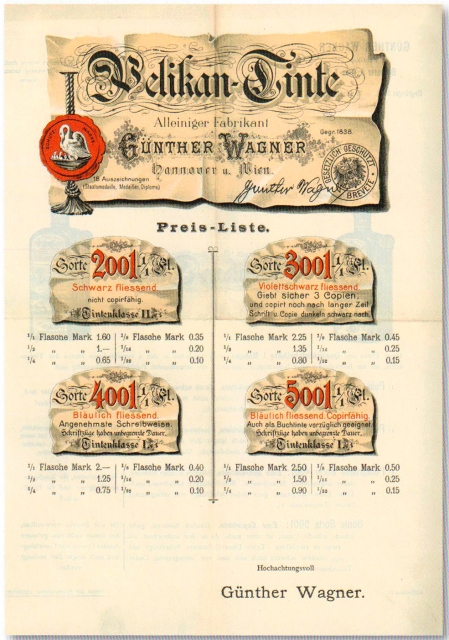 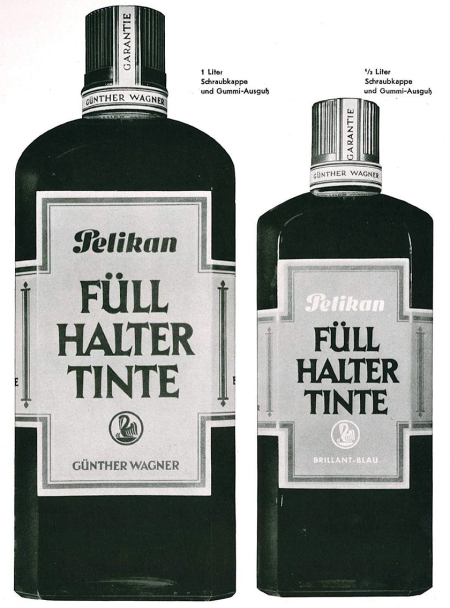 There you have it.  The impetus behind today’s post was the paucity of information out there related to these lines.  I utilized the resources outlined below to cobble together the above information.  Most of these were written in the German language and none of them alone painted a complete picture making the work challenging.  I have done my best, as always, to strive for accuracy in my reporting but please do let me know should you find any inaccuracies so that I may correct them and set the record straight.  I will leave you with one parting anecdote that I can neither confirm nor deny though I found it interesting none the less.  An old advertisement put out by the U.S. distributor for Pelikan in the late 1990s relates the story of how 4001 got its name.  As the story goes, the formula for 4001 was kept in a recipe book of sorts.  Writing inks were reportedly kept in book four and the first formula was coded as “001.”  Hence the designation 4001.  While I am skeptical of that story which seems somewhat implausible, it is not altogether impossible. 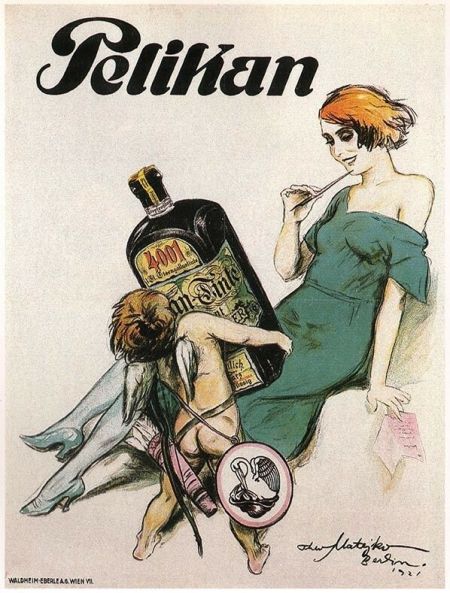 Advertisement for Pelikan ink by Theo Matejko circa 1921