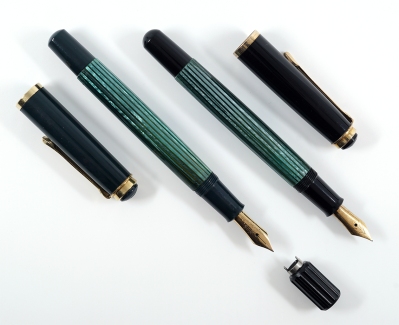 A removable nib has long been one of Pelikan’s hallmark features since the earliest days of the transparent Pelikan fountain pen first introduced 90 years ago.  Pelikan Schreibgeräte tells us that one of the company’s early slogans was “The right nib for every hand.”  The screw-in nib unit allowed retailers to keep a small cache of nibs on hand which allowed Pelikan’s products to meet a wide range of customer preferences.  The convenience of this thoughtful design and the marketing put behind it allowed Pelikan to quickly earn the esteem of vendors and customers alike.  Each unit consisted of a nib and an ebonite feed held together by a threaded collar which would screw into the pen’s section.  Pelikan has long had mechanisms in place for the safe removal of those units.  For the 1oo, 100N, and Rappen models, a special pair of pliers was developed to suit the purpose.  The pliers had a series of three or four notches into which the fins of the ebonite feeds could be slotted.  This would allow for a more secure method of nib removal with less risk of damaging the feed’s fragile fins (try saying that three time fast).  The engineers at the company went back to the drawing board with the introduction of the 400 in 1950.  Rather than a pair of pliers which still ran a risk of damaging the nib, they designed a socket wrench, also known as a box or tubular spanner, to accomplish the task.

Pelikan’s original pliers for removing nib units from models 100, 100N, and Rappen. The inner portion was designed to facilitate removal of the piston assembly

Known as a spanner throughout much of Europe and a wrench in the U.S.A, the origin of both words means to draw tight or twist.  The 400 was first introduced in May of 1950 and included a friction fitted nib assembly.  Just three months later, in August, the company abandoned that design in favor of a screw-in nib unit.  Like they had done with their earlier models, Pelikan’s engineers designed a clever method for removing the nib without damaging the feed.  Each collar was designed with two shallow grooves approximately 1 mm wide and 4 mm long placed on opposing sides of the collar.  Into those grooves, a ‘feder steckschlüssel’ or nib socket wrench could be inserted.  Just 24 mm long (not quite an inch) and with an outer diameter of 11.1 mm, this diminutive tool is well suited to the task.  Once in place, the nib and feed sit completely within the tool and the knurled grip allows for easy handling.  The tubular design met the simultaneous goals of facilitating nib removal without the risk of damaging the nib or the delicate fins of the feed.  Vendors could purchase repair kits that included such a tool.  The nib units belonging to models 120 and 140 would also incorporate this innovation.  Even pens made for other manufacturers such as the Taylorix 140 and the Gimborn 150 can be found sporting the same slotted collars.   The design appears to have been utilized throughout the 1950s up until the early to mid 1960s. 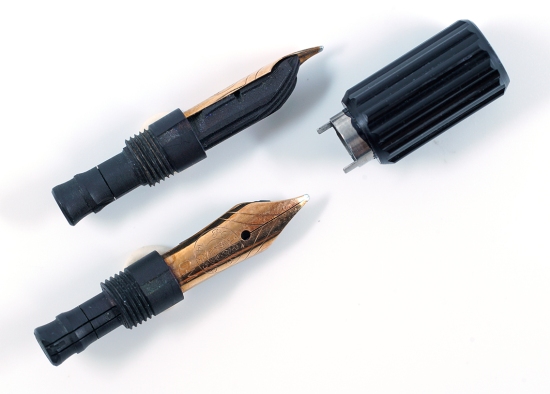 Pelikan’s screw-in nib unit and socket wrench. Note how the nib and feed are protected inside of the wrench

Like any good story, this one has a bit of intrigue built in and doesn’t just end with a nicely implemented design.  It should not be surprising that a competing manufacturer might arrive at a similar solution to the same problem.  In manufacturing, it is often the case that the spoils go to the first to file for a patent.  It so happens that Montblanc-Simplo GmbH had done just that and were the first to patent a design very similar in scope to what Pelikan came up with.  This would have prevented Günther Wagner from utilizing their design.  As luck would have it, Pelikan had already been preparing to take Montblanc to task over patent infringements related to the telescoping piston mechanism utilized in one of their models.  Discussions between the two companies yielded a compromise which allowed Günther Wagner the continued use of the socket wrench without having to pay any royalties and in return, the complaint against Montblanc was dropped.  A contract would ultimately be signed between the two companies allowing for the joint use and protection of the patents.

A replica of one of Montblanc’s original nib removal tools