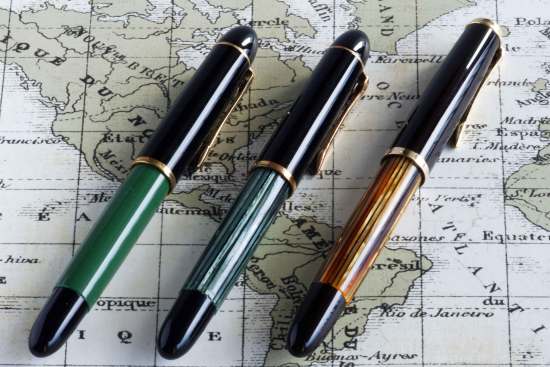 When I bought my 400NN tortoiseshell brown (perhaps one of my favorite Pelikan’s of all time), I was incredibly excited and couldn’t wait for its arrival.  Imagine my utter disappointment then when it finally arrived and I found the cap threads to be stripped, or so I thought.  When the cap was screwed or unscrewed, there was a very disconcerting clicking sound and resistance halfway through the turn.  This was a completely foreign experience for me as this behavior was unlike anything I’d ever experienced before in my other Pelikan pens, modern or vintage.  After extensive searching online, I found very little information about this phenomenon.  It wasn’t until I met and spoke with Rick Propas of the PENguin at the D.C. Fountain Pen Supershow in the summer of 2013 that I realized my pen was not broken but was actually demonstrating a factory designed behavior.

What follows is what I learned from Rick as well as a small tidbit of information gleaned from a read through of the book “Pelikan Schreibgeräte.”  Since I had so much trouble finding this information out for myself, I wanted to share what I learned in the hopes that it may help others. 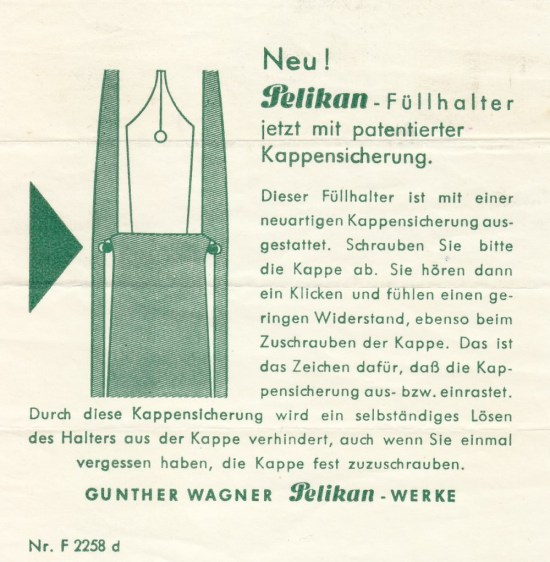 New! Pelikan – Pens now with patented cap backup. This fountain pen is equipped with a new cap backup. Please screw the cap off. You will hear a click and feel a small resistance as when screwing on the cap. This cap secures against coming loose from the barrel, even if you have forgotten to firmly screw on the cap.

The resistance that I described halfway through screwing or unscrewing the cap which needs to be overcome for removal or replacement of the cap  is there by design.  I don’t believe that it was a marketed or widely publicized feature nor do I believe it was ever officially named/trademarked.  I refer to it as the secure locking cap.  The mechanism is actually a safety device which was employed on the 120, 140, and 400NN circa 1958.  The resistance provided a way to prevent the unintentional uncapping of the pen.  One of the nice things about the Pelikan cap is that even though it is a screw-on cap, it can be removed and replaced quickly due to the threading.  This has the unfortunate side effect of a pen occasionally coming undone in the pocket if the cap is not secured tightly.  This secure locking cap does indeed protect against that.  I guess that the feature wasn’t widely appreciated as it did not seem to expand into other models or be incorporated for very long.