As far as demonstrator fountain pens go, the clear variants are perhaps the purest because they allow the most unobscured visualization of a pen’s inner workings.  With this year’s release of the re-issued M205 Clear Demonstrator, I thought that it was an opportune time to look back at Pelikan’s clear M2xx models and to highlight some of the differences between each.  To date, there have been seven clear demos released in Pelikan’s lower tier Classic line, not including the very similarly styled M481 demo.  These models are characterized by a less ostentatious trim than the Souverän series as well as a slightly less refined finish.  The upside is that you get a great pen for substantially less money than what a Souverän might cost.  While I was working on this article, my wife somewhat incredulously remarked, “You have seven of the same pen?!”  While that may seem to be the case upon first glance, each pen has a unique variation or two that sets it apart and allows for proper identification (though that explanation somehow did not mollify my wife).  Clear demonstrators draw both appreciation and ire for facilitating an unobstructed view of the piston mechanism as well as the ink chamber.  Each fill with a different colored ink can serve to change the pen’s look, keeping the writing experience fresh and exciting.  The trade-off, of course, is that without proper pen maintenance, those colors can persist long after a pen is emptied.  While staining is a real possibility with any demonstrator, it can be all the more apparent in one of the clear demo variants.  Still, proper pen care makes this a relatively small issue and one that shouldn’t bar you from enjoying such a great pen.

END_OF_DOCUMENT_TOKEN_TO_BE_REPLACED

A demonstrator is a very polarizing type of fountain pen amongst enthusiasts.  Some love them for the ability to see the inner workings of the piston mechanism.  Nothing is left to the imagination and new shades of ink can effect a chameleonic transformation upon the pen’s appearance.  Others hate them for the very same reason since every errant blob of ink may become glaringly evident and stains aren’t so well hidden.  Pelikan has released many demonstrators over the course of its history including several amongst their Classic series.  This is Pelikan’s lower tier line with a somewhat less ostentatious trim than the Souverän series, stainless steel nibs in place of gold ones, and a slightly less polished finish.  Don’t let those differences fool you though as these are excellent fountain pens for substantially less money than what the Souverän line commands.  One production theme that has often been repeated across the M2xx series is that of the brown transparent demonstrator.  Since 2003, Pelikan has released four models done in a shade of brown, three of which are so similar that only a few tell tale details set them apart.  The newest model to that line is several shades darker and I thought that it would be interesting to see these four distinct but related releases together so that you might see just how they stack up with one another and how much darker the Smoky Quartz actually is.

END_OF_DOCUMENT_TOKEN_TO_BE_REPLACED 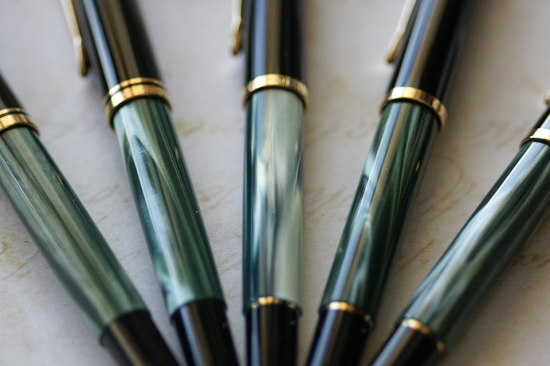 Pelikan has had many unique fountain pen releases over its long and storied history.  Amongst the Classic line, the marbled variants have proven very popular and have had an enduring presence since their introduction in the late 1980s.  Perhaps no finish has enjoyed the longevity of the grün marmoriert or green marbled variant, one of Pelikan’s best sellers.  This pattern has seen no less than five permutations across a couple of different models in the M2xx family.  The marbled look can be traced all the way back to Pelikan’s earliest pens dating to the 1930s.  I thought that it would be fun to explore each one of these modern iterations in the M2xx line-up, especially in light of the newest version released in November 2015.  Green marble is back and while it may seem like much of the same on the surface, there are some subtle differences that are worth pointing out.

END_OF_DOCUMENT_TOKEN_TO_BE_REPLACED

Pelikan’s 101N Lizard from the 1930’s is a highly sought after and well-regarded fountain pen.  At auction, it can command prices upwards of $1500-$2000.  It’s finish is unique and stands out against Pelikan’s more well-known tortoise designs.  The release of the M101N Lizard in 2012 served as a modern homage to that originator but the finish seemed to fall short of expectations and, anecdotally, does not appear to have been as well received as the M101N releases before and after it.  Regardless of your opinion of the pen’s appearance, if you thought that the 2012 M101N Lizard was the first time that Pelikan re-visited the lizard design, think again.  Sometime in the mid-1990’s a special edition set was released to the United States in a pattern then described as “Snakeskin.”  If you look at it in person, it is very similar, if not identical, to the lizard pattern of today’s M101N.  While the rollerball and ballpoint versions can still be had with minimal difficulty, very few of these snakeskin fountain pens have ever been seen and information on them is sparse and incomplete.  Maybe this is because there is some truth behind one rumor that contends that only ten such pens are known to exist.  While I can’t provide any validity to that rumor, after much research, I believe that I have cobbled together a plausible origin story and will do my best to try to shed some light on this seldom seen model.

END_OF_DOCUMENT_TOKEN_TO_BE_REPLACED

A subtle distinction exist between limited and special edition pens.  Pelikan has manufactured many limited edition pieces which are characterized by production in a defined run of finite number.  In contrast, special edition pens are often produced in an unlimited number but only for a limited period of time.  Since the mid-1990’s, Pelikan has released many limited edition pens.  These are often targeted at a specific consumer group with sufficient purchasing power as the price of these models usually comes at a premium.  Since these pens are only available in a known limited quantity (with individual pieces often numbered), the company builds in an incentive to buy.  Examples would include; The Pyramids of Giza, The Hanging Gardens, The 1000 Years of Austria, Golden Phoenix, The Originals of Their Time series, Hunting, Golf, and Wall Street just to name a few.  These are pens designed to commemorate certain events in history, places, historic pen models, or activities.  There is also a subset of special edition pens produced in a limited quantity which are made at the request of a specific consumer or for a particular region.  This practice within the company dates back to before World War II with the production of the Emege pens and has continued since that time.  This has resulted in several variations based off of mainstream model lines that were produced only in small runs for a specific customer though were not themselves numbered.  Six of those pens from the modern era will be detailed in this post.

END_OF_DOCUMENT_TOKEN_TO_BE_REPLACED

I have long been perplexed by the existence of various Pelikan ballpoints and fountain pens that feature a cap with a nib on a chain rather than a clip.  The extra nib hangs off of the cap, almost like a charm would.  That is not an entirely foreign concept as Pelikan tried something similar with their ‘Happy Pen’ in the 1970’s.  This variation of the tradition series is not well documented, however, in any of the materials that I have ever found.  No mention of it is made in either edition of Pelikan Schreibgeräte.  It certainly seems to be an odd choice of design and not very practical.  After much fruitless searching, I inquired from the most knowledgeable source that I know, Jürgen Dittmer of the Pelikan archives.  What I learned was also corroborated by information from Regina Martini, a well-known Pelikan retailer.

END_OF_DOCUMENT_TOKEN_TO_BE_REPLACED

Pelikan has released many special editions over the years, usually at the request of its customers.  Sometimes these are brought about by the company and other times, they are special order pieces for companies that contract for a limited run.  Many special editions are depicted in The Aviary which includes pens such as the M150 Bols, the M200 Deutsche Telekom, the M200 Citroenpers, and the M250 Tortoiseshell Brown.  There is a much lesser known model out there that qualifies as a special edition and it is known as the M201.

The M201 was released in the year 2000 and was a run of roughly 3000 pieces.  This was a clear demonstrator with a black piston assembly/mechanism which has the same design/dimensions as the M200.  Since it is a post-’97 model, it is distinguished by a crown cap top, single cap band, and has a single trim ring at the piston knob.  The nib is gold-plated stainless steel.  It is an M200 for all intents and purposes but was manufactured for the Japanese market and branded M201.  I am not familiar with any other pen being branded as an M201.