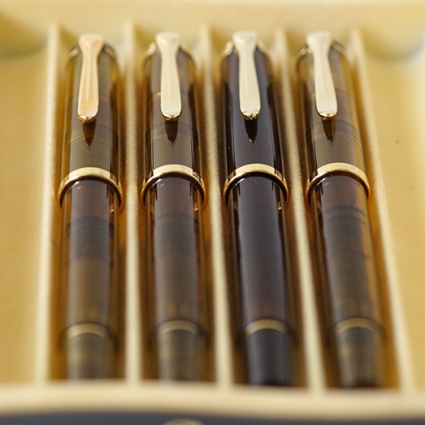 A demonstrator is a very polarizing type of fountain pen amongst enthusiasts.  Some love them for the ability to see the inner workings of the piston mechanism.  Nothing is left to the imagination and new shades of ink can effect a chameleonic transformation upon the pen’s appearance.  Others hate them for the very same reason since every errant blob of ink may become glaringly evident and stains aren’t so well hidden.  Pelikan has released many demonstrators over the course of its history including several amongst their Classic series.  This is Pelikan’s lower tier line with a somewhat less ostentatious trim than the Souverän series, stainless steel nibs in place of gold ones, and a slightly less polished finish.  Don’t let those differences fool you though as these are excellent fountain pens for substantially less money than what the Souverän line commands.  One production theme that has often been repeated across the M2xx series is that of the brown transparent demonstrator.  Since 2003, Pelikan has released four models done in a shade of brown, three of which are so similar that only a few tell tale details set them apart.  The newest model to that line is several shades darker and I thought that it would be interesting to see these four distinct but related releases together so that you might see just how they stack up with one another and how much darker the Smoky Quartz actually is.