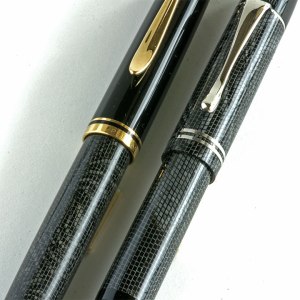 Pelikan’s 101N Lizard from the 1930’s is a highly sought after and well-regarded fountain pen.  At auction, it can command prices upwards of $1500-$2000.  It’s finish is unique and stands out against Pelikan’s more well-known tortoise designs.  The release of the M101N Lizard in 2012 served as a modern homage to that originator but the finish seemed to fall short of expectations and, anecdotally, does not appear to have been as well received as the M101N releases before and after it.  Regardless of your opinion of the pen’s appearance, if you thought that the 2012 M101N Lizard was the first time that Pelikan re-visited the lizard design, think again.  Sometime in the mid-1990’s a special edition set was released to the United States in a pattern then described as “Snakeskin.”  If you look at it in person, it is very similar, if not identical, to the lizard pattern of today’s M101N.  While the rollerball and ballpoint versions can still be had with minimal difficulty, very few of these snakeskin fountain pens have ever been seen and information on them is sparse and incomplete.  Maybe this is because there is some truth behind one rumor that contends that only ten such pens are known to exist.  While I can’t provide any validity to that rumor, after much research, I believe that I have cobbled together a plausible origin story and will do my best to try to shed some light on this seldom seen model.

Pelikan R200 and K200 pens with brochure. Photos from an uncredited internet source

Package labeling for the Pelikan R200 and K200 Snakeskin pens

Sometime around 1994/1995 the R200 and K200 Snakeskin rollerball and ballpoint pens were released to the United States for exclusive distribution through Office Depot, a well-known national office supply chain.  The R200 had a catalog number of 970 814 and the K200 was designated 970 822.  Both of these pens will come up for sale from time to time and while limited in distribution and number, are obtainable.  What is much more elusive is what appears to be the matching fountain pen that was available to complete the set.  It would seem that it was only available through special order directly from Pelikan.  A fragment of an available sales brochure states;

“…unique snakeskin finish from Office Depot.  We are confident it will provide many years of writing pleasure.  Pelikan also produces a fountain pen in this finish featuring its unique piston filling system, a gold-plated stainless steel nib in four sizes and a lifetime guarantee.  If you would like more information on how to order this fountain pen, simply call toll free:…”

Taking the brochure at face value, it would seem clear that there was indeed an M200 Snakeskin fountain pen available for special order.  While the provenance of the brochure cannot be verified, I find no reason to question its authenticity other than the sparse number of M200 Snakeskin fountain pens that have ever been noted.  The question that follows then is just how many were ordered and how many may remain in existence today?  I have only ever seen two examples in the wild.  One was sold by Rolf Thiel (a.k.a. missing-pen) and the other is owned by Daeng (a.k.a. daenghafez on FPN), a well-known Pelikan enthusiast and contributor to the larger fountain pen community.

Since this pen was released prior to the 1997 trim change, it is identified by its derby cap top, absent trim ring at the piston knob, double cap bands, and stainless steel gold-plated nib.  Available nib sizes would have likely been EF, F, M, and B.  The furniture is gold-plated and the ink window is grey.  Daeng’s example has a 14C-585 nib which I believe was placed after the fact rather than accepting that there was a separate M250 release in this pattern.  Interestingly, the brochure mentions  a lifetime guarantee which is unusual for Pelikan as their standard warranty is only three years, even on their high-end Souverän line.  It is at this point where the available factual information runs out leaving only speculation.

Based on the near complete lack of availability on the secondary market, I believe that only very few of these M200 fountain pens were ever made to order.  Fountain pen enthusiast who are likely to buy this pen don’t often shop for pens of this nature at a big box specialty store such as Office Depot.  It is unclear to me for how long these pens were available, how widely they were distributed, or how well they were advertised.  The pamphlet presented above is the only provenance that I have and it is from an unknown internet source.  I have previously listed this snakeskin variant as an M250 in my catalog based on the example that I have seen with the 14C-585 nib.  In light of the above information and the visual verification of Rolf’s example, I am moving it to the M200 catalog which seems more appropriate given the available evidence.  I did make an inquiry to Chartpak, Pelikan’s U.S. distributor, but they did not have any information to provide me on this model.  If you have an M200 Snakeskin fountain pen, have any more knowledge of its origins, or just think that you may know the whereabouts of one, I would truly love to hear about it.