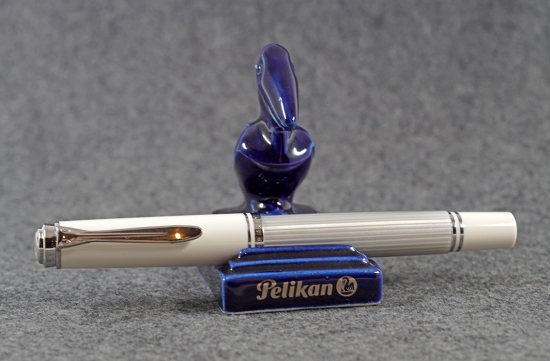 While we await official news of this year’s upcoming releases, I wanted to take one last look back at a model from last year.  I have already reviewed the M205 Moonstone and the M600 Tortoiseshell Red so this time I will be performing a shakedown of the M405 Silver-White.  Pelikan has embraced the use of white resin over the past several years, predominantly amongst their M6xx models.  This time around, rather than something in a medium size, the company has decided to instead show some love to their M405 line which consists of smaller pens by today’s standards.  The M405 series has only been around since 2002 and the Silver-White is just the fifth pen to grace the line.  It is also the first of its line to incorporate white resin into its design.  The other M405 models are the Black, Blue-Black, Dark Blue, and Stresemann.  Upon first glance, the Silver-White has a very similar appearance to 2017’s M605 White-Transparent.  The major difference between the two are their size and the barrel’s striping.  What makes the M405 Silver-White worth reviewing is the fact that it is not a limited or special edition but rather a release added to the standard line-up meaning that you will have time to pick this one up should it suit your fancy.  The Silver-White is a very solid release but brings nothing new to the table.  Read on to find out if this is the pen that you’ve been waiting for.

END_OF_DOCUMENT_TOKEN_TO_BE_REPLACED 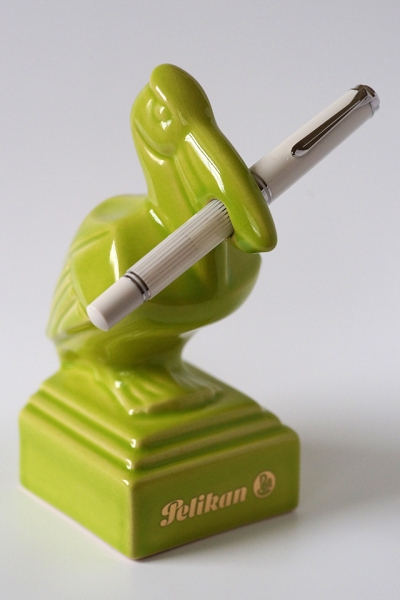 The latest East coast holiday season snow storm has come and gone but none of the new fallen snow thus far has been as white as the M605 White Transparent.  Pelikan’s latest M6xx release was preceded by a bit of uncertainty due to pre-release product photography that was somewhat poorly representative of the actual pen.  Despite that, popular opinion has been favorable towards the M605 and vendors have noted strong sales.  News of a new M6xx Souverän is usually welcomed by many as this model’s size hits the sweet spot for a large swath of enthusiasts.  Unfortunately, it is also one of the more neglected lines in the Souverän family.   The White Transparent looks very sharp with clean lines that are nicely complimented by its palladium plated furniture.  Filling the pen with your favorite colored ink allows it to take on an additional dimension thanks to the transparent barrel which provides for easy viewing of the ink chamber.  A white pen can be somewhat polarizing amongst those in the community and the White Transparent will likely be no exception.  A pen so pure white is surely to be at risk for staining and while its critics will be quick to point that out, the pen has a charm that should allow many to look past such potential shortcomings.

END_OF_DOCUMENT_TOKEN_TO_BE_REPLACED 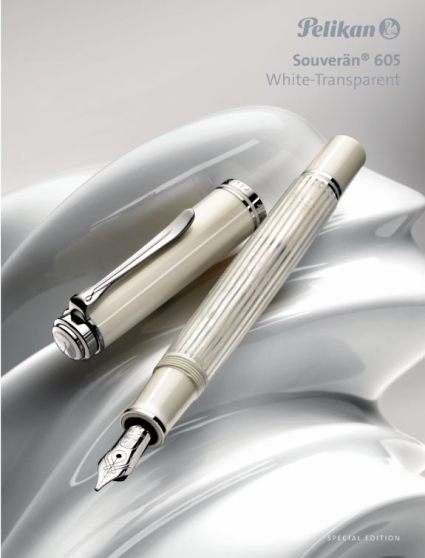 In addition to the Maki-e Dragonfly, Pelikan’s retail channels also broke news of the M605 White Transparent due out in the second half of next month (October 2017).  News of this model was first announced here at the Perch way back in July and much of what was expected at that time has materialized in the final release version of this new model.  Many will appreciate the fact that the M6xx line is getting some attention as this is the preferred size for many who find an M400 too small and an M800 too large.  Pelikan bills this model as a modern reinterpretation of the classic Souverän.  The official statement reads;

“Gracefully with a gentle appearance. That‘s the look of the new Pelikan Souverän M605 White-Transparent. Thanks to its tone-in-tone design it seems to be inconspicuous but it is absolutely not. The bright but not cold white colour shades underline the very modern interpretation of the true classic Souverän.“

If you’ve been waiting for Pelikan to release a new M6xx, this might be the one for you.