Pelikan has been responsible for the innovation and production of some of the most iconic fountain pens of the 20th century.  With 90 years of experience in pen making, a great number of models have been released into the wild.  Some releases were only meant for certain markets and therefore are fairly scarce in most other parts of the world.  As such, a model may be sighted so infrequently that it generates years of debate amongst enthusiasts about its authenticity.  One such example is the elusive M600 Tortoiseshell Brown (circa 1985-96) but it is not the only example.  While the M600 mentioned here turned out to be a factory produced model made for the Japanese market, there is another, older tortoise that has also been subject to a fair amount of speculation.   That model is a Pelikan 101N Dark Tortoiseshell Brown.  While that may not sound controversial, it’s the accents found on this particular pen that make it so.  Rather than the well documented red or tortoise colored components, both the cap top and piston knob of this Dark Tortoise are black.  Much of the information offered to justify this pen’s existence to date has been circumstantial and based on regional anecdotes.  Enough of these have been spotted in the wild to at least suggest that they may have been more than someone’s backroom special.  Today, I try to examine the available evidence and demonstrate once and for all the true origins of this controversial and largely undocumented 101N.

END_OF_DOCUMENT_TOKEN_TO_BE_REPLACED 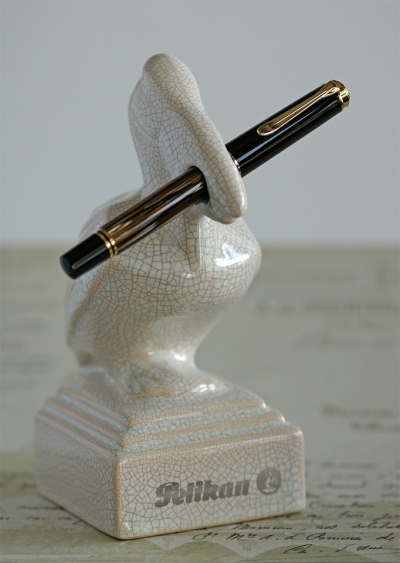 Few designs capture the imagination of the fountain pen community like a tortoise release from Pelikan.  The tortoise finish goes all the way back to the earliest days of Pelikan’s foray into fountain pens.  Forums can frequently be found with posts lamenting the lack of a tortoiseshell variant of one model or another.  When the M800 Tortoiseshell Brown was released in 2013, it became an instant classic.  Prior to that the M4xx line last saw a tortoise release in 2009 (M415) and the M600 line last had one in 2012 (Tortoiseshell White).  When the M800 was made available, one of the few criticisms from the community was that such a finish was not present in a smaller sized model.  Three years later and Pelikan has again resurrected the tortoise as a special edition finish in the M400 series.  This is the first brown tortoise in the M400 line in seven years and is sure to make a big splash, particularly amongst those that favor a smaller/standard sized writing instrument. After a month of regular use, I’ve been very pleased by this model and felt that a review was in order.  Read on to discover my thoughts on the newest special edition to join the flock.

END_OF_DOCUMENT_TOKEN_TO_BE_REPLACED

Vendors have finally put to rest speculation over this year’s rumored M400 Tortoiseshell Brown by announcing Pelikan’s plans for a September 2016 release.  This has been a much anticipated addition to the line-up and I’m certain supplies aren’t likely to last long.  While this announcement had been anticipated since the end of last year, Pelikan continues to show that it can still keep a few secrets.  In a surprise move, we were also given news of an M205 Blue Marbled fountain pen for release around the same time.  This marks the materialization of nearly all of the models that were expected for 2016 though I presume that the company may have one or two more surprises still in store for us before the year ends.

END_OF_DOCUMENT_TOKEN_TO_BE_REPLACED 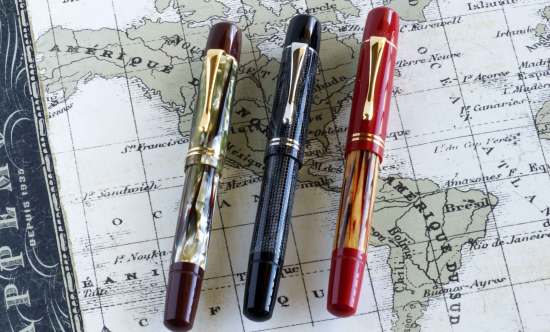 The M101N Tortoiseshell Red was recently released in September of 2014 and I wanted to mark the occasion by reviewing all three of the pens available in the series.  The M101N is the modern version of a line of pens that Pelikan first introduced in the 1930’s.  There were several variations released in that series, all of which command top dollar in today’s market due to their desirability amongst collectors.  Included in the original series were pens such as the highly sought after Lizard and the Tortoiseshell Red.  This new series pays homage to that lineage with an updated design while still retaining the original’s dimensions.  The first pen released in the series was the  Tortoiseshell Brown followed by the Lizard and then the Tortoiseshell Red.

END_OF_DOCUMENT_TOKEN_TO_BE_REPLACED 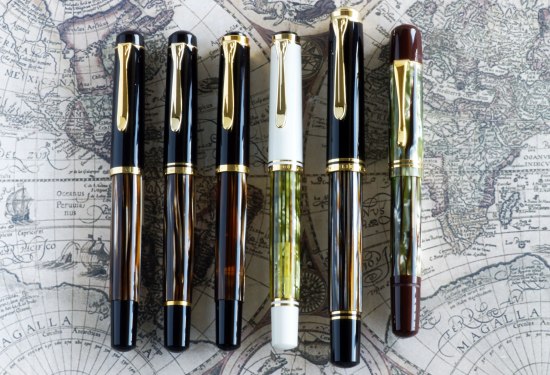 One of the symbols of the Pelikan brand has long been the green and black pin stripe pattern affectionately nick-named Stresemann. While this may be the iconic design that the company is known for, I would wager that few of their designs have captured the imagination (or the eye) of collectors, users, and the even the uninitiated alike as the Pelikan tortoise finish.  The tortoise has been an integral part of their line up and has been produced in many variations over the decades. It would certainly be a daunting challenge to focus on all of the tortoises released over time so to keep this post manageable and engaging, I will present you with a discussion on just the modern tortoises, those produced from 1980 through today. Don’t despair though if you have a soft spot for the tortoises of days gone by as I hope to revisit this topic and feature those tortoises from which our modern designs take their inspiration at some point in the future.

Amongst Pelikan enthusiasts, lamenting the lack of a tortoise variant of one model or another always seems to be a popular topic of conversation.  To the collector, it would seem a no brainer; make a tortoise variant and how could it not fly off of the shelves.  Unfortunately, it seems that time and time again when Pelikan does make such a beauty, they don’t turn out to be the great sellers we all think that they should be.  They linger on shelves and stock ends up getting discounted.  Once the limited production run ends, supplies become sparse, prices creep up, and only then do these beauties become the coveted treasures that we know them to be.

I often see a lot of uncertainty and confusion arise when people try to identify tortoise variants that they’ve come across.  There are even many collectors out there who haven’t seen all of the variations as some of them have either been so limited in production or otherwise relegated to a particular region of release as to not be widely known.  What follows is the best accounting of the various modern releases that I’ve been able to put together and I hope that it serves as a useful reference.  I believe that I’ve included every known variation of tortoise from 1980 through 2014 but, of course, the nature of these pens makes them somewhat elusive which is also part of their mystique.  There is always the chance that I’ve missed one.  Care to guess just how many tortoises have been available over the last 34 years?  If you thought the answer was sixteen, then you are indeed an aficionado.  If you weren’t even close, read on.  Known models include the; M200 Brown, M250 Brown, M400 Brown (’84-’96), M400 Brown (GK Type 1), M400 Brown (GK Type 2), M400 White, M415 Brown, M450 Vermeil, M600 Brown, M600 White, M800 Brown (’88), M800 Brown (’13), M101N Brown, M101N Red.