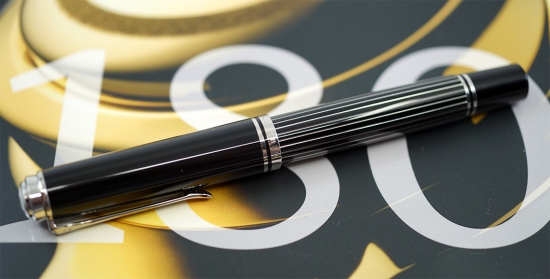 The M815 Metal Striped special edition was announced in May and began shipping in late June of this year.  It is the first M8xx release during the company’s 180th anniversary which makes the stakes seem just a little bit higher.  This is not the first Pelikan pen to be labeled an M815 though.  That honor fell to the Wall Street limited edition from 1995.  While the two pens share little in common, it is nice to see Pelikan taking a new approach in tackling what is by now a familiar theme.  The current M815 marries Pelikan’s high quality resin with palladium-plated stripes made from brass.  The overall effect is a sophisticated elevation of their typical striped “Stresemann” design which enjoys a long and prestigious heritage.  The brass added to this model gives it more heft than your typical M8xx, a boon for those who like a heavier pen.  While not an exact analogy, you can think of it in terms of cramming an M1000’s weight into an M800’s body.  One thing that detractors will likely be quick to point out, and rightly so, is that this model seems to have a lot in common with the M805 Stresemann from 2015.  Let’s take a closer look and see if the M815 has enough going for it to stand on its own merits and separate itself from the pack.

With the release of the M815 also comes a unique packaging designed just for this model.  The box is black with silver stripes in an offset pattern with the words “Pelikan Special Edition” located at the top right hand corner.  When you open the flap, you find the pen held in the box at an angle making for a simple but effective presentation that ties in well thematically with the pen’s design.  With the packaging out of the way, you’re left with a very handsome fountain pen that, despite being adorned in palladium plated stripes, does not come off as overly flashy.  The black cap and barrel provide a nice contrast that really sets off the palladium.  The finish of the barrel is smooth to the touch thanks to several coats of lacquer applied to the outer surface.  The furniture is consistent with the standard trappings of an M8xx model.   We have a cap top that depicts the one chick logo, two cap bands inscribed “Pelikan Souverän Germany”, two trim rings at the piston knob, and a single trim ring at the section, all plated in palladium.  There is a dark gray ink window above the section which serves to break up the design.  I suspect that this will by a point of contention for those who do not like an ink view window disturbing a pen’s good looks.  Personally, I appreciate having a reliable and easy way to gauge the remaining ink such that I never have to worry about running out.  A rhodium plated nib and Pelikan’s traditional beak clip completes the pen’s appearance.  The barrel and ink window are the only things that deviate from the M805 Stresemann but they serve to give the M815 a more bold look to my eye while still not being at all flashy.

The construction of the M815 is just what you’d expect from Pelikan.  It has a substantial feel in the hand thanks to the added weight of the brass stripes.  Upon close inspection, I could not find any visible seams or other signs of the manufacturing process.  This model does include a trim ring at the section which, as I’ve pointed out in the past, can be prone to plating loss and rusting with long-term use.  This is usually only an issue with pens that are not well maintained and where inks are allowed to sit for a prolonged period on the trim. Certainly not a deal breaker by any stretch provided you exercise basic fountain pen care.  The nib on my example wrote smoothly out of the box and did not require any adjustment which is always appreciated at this price point.  The cap is quick to unscrew when you want to get writing and I have yet to have it come undone unintentionally in my pocket which means that you can carry it around with little worry about ruining something.

The M815 holds a unique place in the M8xx line.  It retains the same dimensions as all of the other M800 and M805 models but it takes on additional weight thanks to the brass elements in its construction.  If an M800 is too big or heavy for you, this one will certainly be no better.  On the other hand, if the M800 is your thing, I don’t think the added heft will be a turn off for too many.  It feels substantial without being at all uncomfortable.  The M815 Metal Striped measures approximately 5.56 inches when capped, 6.44 inches when posted, and is 0.53 inches in diameter.  It weighs 1.02 ounces without the cap and 1.31 ounces with the cap.  Compare that with the standard M8xx weight of around 0.99 ounces.  That puts this one even on top of the giant M1000 as far as the scales go which weighs in at a paltry 1.14 ounces.  The pen has a nice fit in the hand when writing without posting.  Posting the cap, which is my general preference, does not throw off the balance at all and makes for a comfortable writing experience.

The M815 is equipped with Pelikan’s standard monotone appearing rhodium plated 18C-750 gold nib.  Available nib widths include EF, F, M, and B though you will pay more for an EF nib from a vendor in the European Union due to Pelikan’s current policy.  The fine nib on my example has been a faithful writer.  Quick to start, slow to dry out, and nary a skip.  My example has just a slight hint of spring to it but the line lacks any character.  It also runs just a touch wide, straddling the border between what I’d consider fine and medium.  Still, it gets the job done with aplomb.  If the standard offerings aren’t to your liking, you could always have the nib custom ground to suit your preferences.

Pelikan’s piston filling system remains at the top of the heap and is beyond reproach.  The piston has a smooth travel along the length of the barrel and can fill to capacity in just one stroke.  The piston knob secures snugly to the barrel when the piston is retracted.  Pelikan quotes an ink capacity of around 1.35 mL.  The piston is easily serviced by removing the nib and applying the tiniest drop of pure silicone grease to the inside of the barrel every few years or so (depending on usage).  The piston assembly of the M815 is threaded allowing it to be removed if need be though I would caution that it is very rarely ever necessary to do so.  Of course, the removable nib means that you could always changes sizes or facilitate an easy repair without too much hassle. 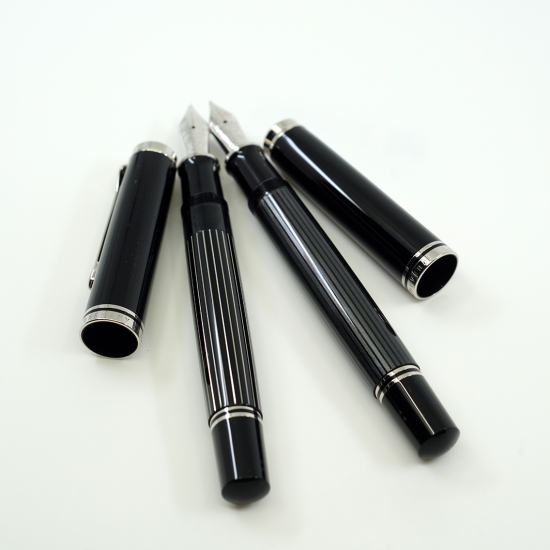 The M815 Metal Striped special edition has a US MSRP of $850 with domestic retailers selling it at a 20% discount for a final sale price of $680.  Pelikan seems to be back on the high end of pricing after a brief reprieve.  If we look at some past M8xx releases and their MSRPs, we see that the M805 Vibrant Blue (2015) went for $875, the M805 Stresemann (2015) for $800, and M805 Ocean Swirl (2017) for $650.  Of course this isn’t comparing apples to apples since there are unique design elements and additional materials here that likely add to the cost of production.  Still, Pelikan’s pricing feels out of touch and inflated for the US market.  United States’ customers shopping overseas can find a modest savings since this one retails for around $590-600 before shipping or other discounts are applied.  At the end of the day, it is a very nice pen and something unique in Pelikan’s line-up.  I just wish the company was more consistent in their pricing structure.  If you have the money, you could do a lot worse than landing one of these.

The M815 Metal Striped fountain pen comes out in time to celebrate Pelikan’s 180th anniversary year and seems worthy of such an occasion.  It takes a long standing theme that represents a company icon and elevates it in a subtle and alluring way.  Some will gripe about the ink window breaking up the design but I think that, overall, Pelikan has a winner on their hands.  It does skirt awfully close to the M805 Stresemann as far as looks go but I think that this one sets itself apart a bit more than it seems, particularly when you see them side by side.  Despite my affection for the anthracite M805, in my humble opinion, I think this release is what the Stresemann should have been.  I do not have any problem recommending the M815 if you’re looking for big performance and a substantial feel from a relatively compact form factor.

A Look At The Pelikan M815 Metal Striped