Pelikan has enjoyed a long and storied history of pen production.  For this post, I’d like to focus on what may well be characterized as a bit of an oddity in the Pelikan line-up.  The P1 was introduced in September of 1958 and enjoyed only a short production run ending sometime in 1963, presumably due to poor sales.  The ‘P’ designation stands out as unusual here because this more commonly denotes a patronen-füller or cartridge pen but the P1 is in fact a piston filled fountain pen.  This model was available as both Silvexa (P1S) and Rolled Gold (P1RG) variants.  It came at a time when hooded nibs were en vogue and seemed to serve as Pelikan’s answer to the phenomenon.  That said, Pelikan’s foray came much later than most other companies since pens like Parker’s 51 & 61, Aurora’s 88, Lamy’s 27, and Waterman’s C/F had already been on the market for some time.  Until the introduction of the P1, Pelikan had been producing pens like the venerable 140 and 400, making the P1 a significant departure in design.  Be that as it may, many people have shown much affection for the P1 and I felt a bit of a historical overview and review were in order as the P1 slowly creeps up on its diamond jubilee.

The P1 came in two major variations along with several different finishes.  In its six year run, the model was also subject to a couple of refinements to the overall design.  The pen depicted here is the Rolled Gold Diamond Black finish.  The Rolled Gold models also included Agate Grey, Emerald Green, and Ruby Red.  The Silvexa, a silver colored version, was available in the same finishes plus a low production volume demonstrator model is also known to have existed.  The rolled gold cap is topped with a pointed jewel while another jewel sits upon the piston knob, both done in the same color as the barrel.  No other furniture adorns the pen.  The solid finish of the barrel is only disrupted by an odd, rounded “porthole” ink view window.  Some of the known design tweaks that I previously alluded to include;

Whether Rolled Gold or Silvexa, the P1 has an understated appearance, one that I find grows on you after a while.  Some points of contention for me are the forward position of the cap threads and the relatively uninspired look of the hooded nib.  Probably most bothersome is the ink view window.  Four rounded windows are mounted towards the rear of the barrel which means you have to hold the pen nib up to gauge the remaining ink level.  This design just doesn’t work well for me and overall has been more frustrating than helpful.

The P1 is a well made pen devoid of any experimental plastics or overly brittle materials.  The cap can be unscrewed in just half a turn which makes it quick and easy to get down to business and I haven’t had any issues with the cap coming undone in the pocket.  The cap threads being positioned so far forward might be problematic if you grip your pen close to the nib but I doubt this would be a problem for the majority of users.  One thing that the cap threads do well is prevent the marring of the barrel, something more commonly encountered with contemporary designs.  The construction of the P1 has withstood the test of time, proving its durability.

The P1 is a smaller pen and therefore not to everyone’s taste.  The pen measures 5.20 inches capped and 5.75 inches when posted.  The P1 post very securely which is a boon to those who prefer a posted pen.  The pen is narrower near the section and piston knob and widest at its center.  That center has a diameter of 0.42 inches whereas the ends are around 0.34 inches.  The P1 weighs approximately 0.51 ounces.  The ink capacity is generous, boasting 1.5mL which is rather large compared with many of today’s models.  This should ensure uninterrupted writing for an extended period.  The pen’s smaller size means that the P1 has no problem fitting in a shirt pocket or travel case making it easy to take on the go. 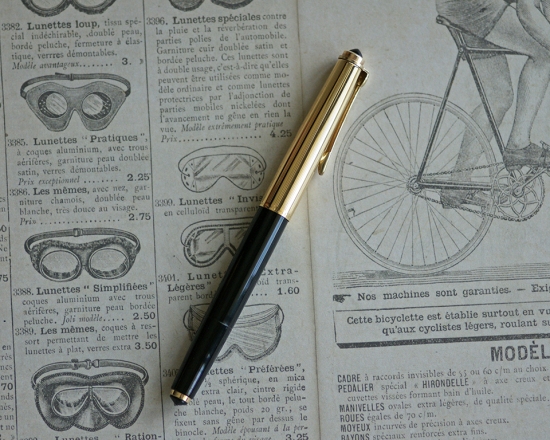 The hooded 14C-585 gold nib is not much to look at and reminds me of a Parker 51.  Only the very tip of the nib protrudes from its plastic housing.  The P1 nib tends to be very smooth and provide a generous flow of ink with just a hint of feedback.  I find that the feed is particularly resistant to drying out, even if left unused for weeks.  This is likely due to the feed’s design which literally takes up about half of the pen.  Like most hooded nibs, the P1 provides a very firm writing experience without any noticeable flex.  One very nice thing about the P1 is that there were a lot of nib size options available.  These came in standard sizes (EEF, EF, F, M, B, BB), left handed obliques (OF, OM, OB, OBB), right handed obliques (RF, RM, RB, RBB), and kugel “ball point” nibs (KEF, KF, KM).  A durchschreib “manifold” nib (DEF, DF, DM, DOM) was also available for an added premium of 2.50 deutsche marks (DM).  With that kind of variety, there is no shortage of character available from the P1 writing experience. 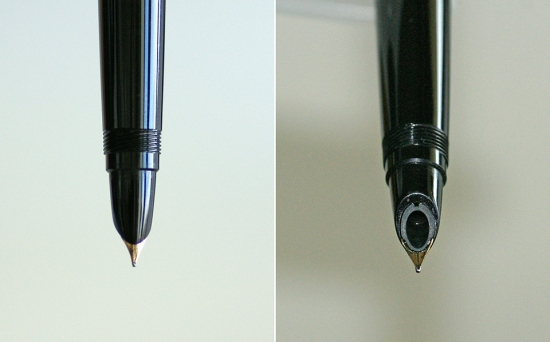 The P1 employs Pelikan’s classic piston filling mechanism which saw relatively little alteration when adapted to this model.   It is friction fitted to the barrel and can be removed if need be, a task best left to a professional.   The ink feed is reported to have undergone a special design that allowed it to store a larger volume of ink while also making it less susceptible to changes in atmospheric pressure or temperature.  This feed was dubbed the “Pelikan Thermic Regulator” in their sales literature.  The unique design of the feed meant that a special tool was required to remove it which impacts the ease with which the P1 can be maintained.  Re-lubing the piston is more difficult than Pelikan’s other models.  That said, I have seen the nib and feed removal accomplished simply by using a toothpick but it is definitely more challenging than some other designs.  For additional pictures of the feed and nib removed from the pen as well as the feed removal tool, see Dominic Rothemel’s documentation on “Covered nibs 1958 – 1965” and the “Pelikan P1.” 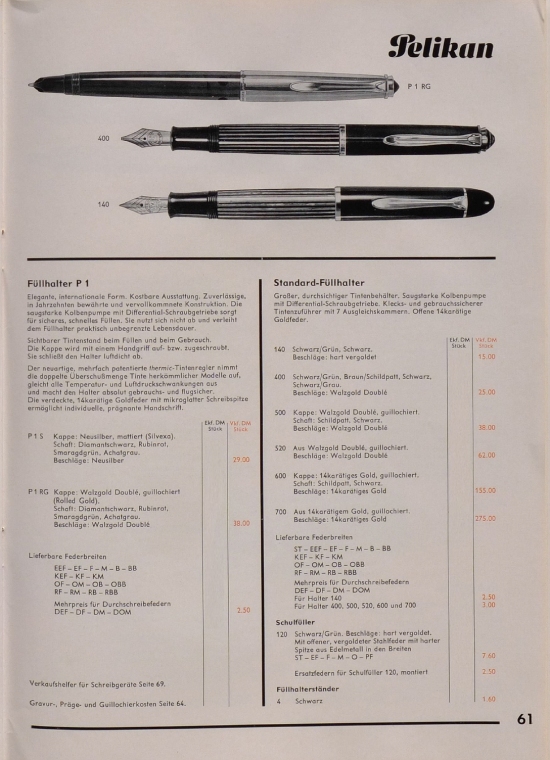 Diagram of the thermic regulator as filed for patent by Theodor Kovacs and published June 4, 1958 by the patent office of London

Pelikan’s 1962 price list 100 A/4 shows that the Silvexa model had a suggested price of 29.00 DM and that the Rolled Gold version was 38.00 DM.  Interestingly, these prices were higher than either the 140 or the 400 being produced at the same time.  The P1 can be found pretty reasonably priced in today’s secondary market making it a good value for the money.  A look at recently sold auctions indicates that prices can range anywhere from $35-150 depending on condition and desirability (more commonly on the lower end).  For the money, you get an excellent hooded fountain pen that works very well.

The P1 was a bit of an experiment for Pelikan.  It was a departure from prior designs and employed new technology.  There is nothing that is inherently wrong or an absolute deal breaker with the P1.  The pen works as it should and is very reliable.  The thermic-regulator feed does its job like the best of them.  With use, the P1 has grown on me but, despite its strengths, it simply does not steal the imagination the way a Souverän might.  There is nothing overly special to distinguish it from a lot of other hooded fountain pens but also not much to disappoint.

A Look At The Pelikan P1 Rolled Gold Diamond Black