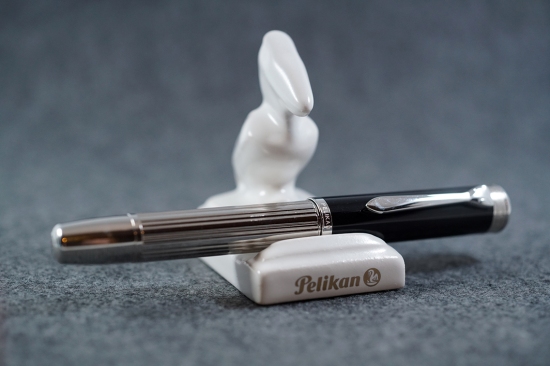 In 2007, Pelikan introduced the Majesty series of fountain pens.  Production would run through 2012 and include the M7000 and M7005.  They are hefty pens that incorporate a piston mechanism hidden by a sterling silver sleeve.  The M7000 is characterized by a sterling silver cap with gold plated accents and a two-tone nib.  A limited edition of this model made up of just 170 pens was released in 2008 in honor of the company’s 170th anniversary.  That version is entirely gold plated with three diamonds embedded in the nest on the cap top.  The M7005 eschews the gold plating and includes a highly polished black resin cap.  Each model line had a matching ballpoint and rollerball available.  The cap top features a Jugendstil frieze, the design of which was taken directly from the facade of Pelikan’s original offices in Hannover, Germany.  This horizontally, engraved band depicts a motif of pelicans, originally crafted by a stonemason at the turn of the century sometime between 1900 and 1906.  Jugendstil was the German counterpart to Art Nouveau, an artistic movement that was active from 1895 to 1910.  The movement developed as a reaction to the historicism and neo-classicism of the official art and architecture academies and was most active in the fields of graphic arts and interior design.  That original frieze remains in place to this day.  The Majesty’s launch was met with mixed emotion and, like its contemporary the Ductus, opinion was split down the middle.  Hampered by an undersized nib and a supersized price tag, the pen certainly had its detractors.  Read on to find out if the Majesty holds up to royal scrutiny.

The packaging for the Majesty consists of a large blue box and an extensive pamphlet in several languages which are nice touches for a pen of this caliber.  The Pelikan M7005 Majesty is largely made up of sterling silver components which gives it a sophisticated if not one note appearance.  Sometimes pens of this nature can look gaudy but that is not the case here.  On the M7005, the all silver look is only broken up by the black resin cap.  There are hand engraved lines on the sleeve overlying the barrel which recall the traditional striped Stresemann appearance that has been a hallmark of Pelikan’s pens for decades.  The back of the sleeve is smooth and resembles the traditional piston knob.  When the sleeve is unscrewed from the barrel, a large ink chamber, a portion of the piston assembly, and the turning knob are revealed.  The choice of a sleeve means that there is no ink view window to break up the aesthetics which can be bothersome for some.  Still, it’s a fairly simple matter to remove the sleeve in order to view the remaining ink in the reservoir.  The section and piston knob are also done in sterling silver.  The beak clip is larger than that of a Souverän and has a spring loaded mechanism.  There is a single cap band engraved “Pelikan Germany Ag925” and the cap top sports the company’s current single chick logo.  The cap’s most outstanding feature is the engraved frieze that was previously described.  Interestingly, rather than being based off of the flagship M1000, this model is more akin to an M600.  Nowhere is that better seen than in the nib which I will expound upon below.  One thing to take into account in terms of appearance is that the platinum plated sterling silver is a magnet for fingerprints that can mar the overall look of the pen a bit.  A quick polish, however, and the appearance of the M7005 does not disappoint. 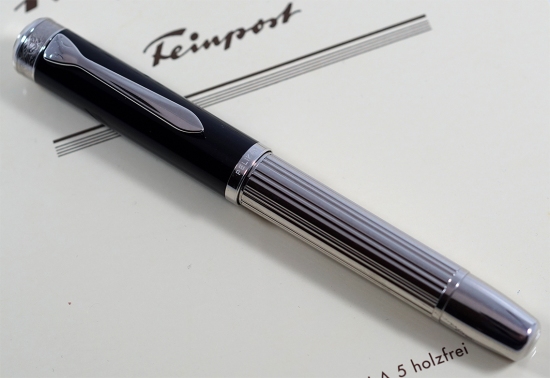 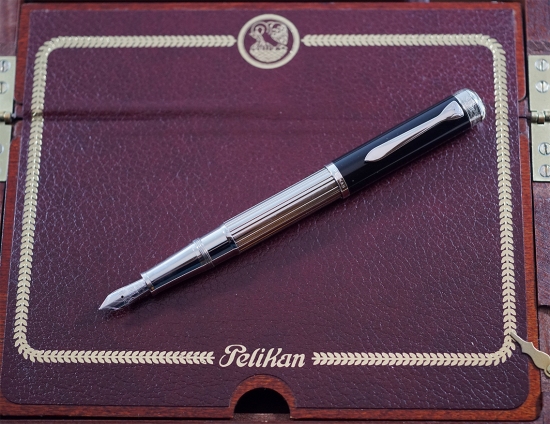 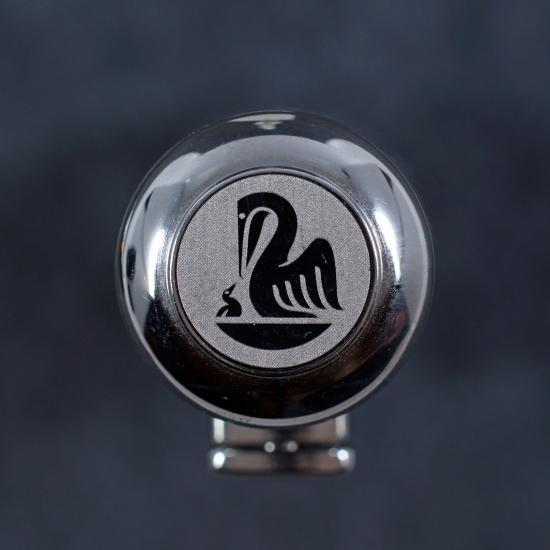 The Majesty has a very solid feel thanks to its largely metal construction.  The cap has a plastic inner sleeve which helps to prevent scratching the barrel when the pen is capped or posted.  The threads that hold the sleeve to the barrel have a locking mechanism that is very noticeable in the final portion of the turn and this prevents the sleeve from coming undone unintentionally.  The spring mechanism for the beak clip has a nice tension to it which holds the pen in place securely.  The section is a bit slippery due to the all metal construction but this is not a major issue and one that is common amongst pens of this type.  Be that as it may, it should also be noted that the section is rather long and very comfortable to grip.  There have been some anecdotal reports over the years of the barrel becoming dislodged from the section but these are far and few in between though worth taking notice of.  The sterling silver here is very resistant to tarnishing due to a platinum coating applied throughout which is a nice addition. 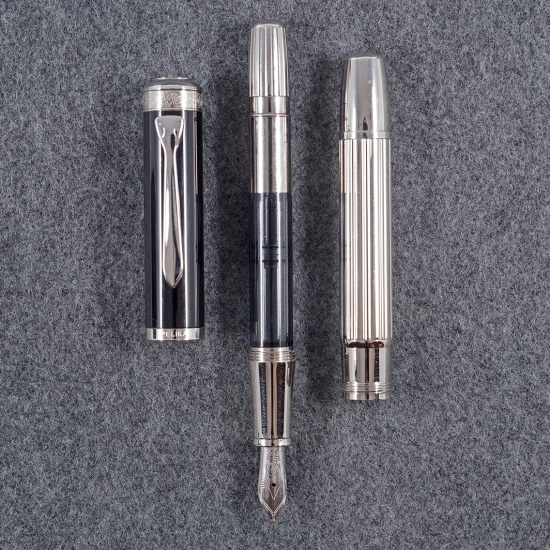 The M7005 is made up of a black resin cap, a one piece barrel with a hidden piston filling mechanism, a removable nib, and a sterling silver sleeve

As you can probably surmise from the metal construction, the pen is quite heavy for its size.  The M7005 Majesty comes in at around 2.12 ounces which makes it much heavier than even an M1000.  That extra weight does cause it to drag a bit in a shirt pocket.  Despite that, the pen does not come off as overly heavy with use though it does feel like the weight is concentrated towards the back end.  It is very comfortable in the hand, especially when used unposted.  Posting is certainly doable but the pen tends to become even more back heavy in that scenario.  The Majesty measures 5.35 inches long when capped and 6.59 inches when posted with a diameter of 0.52 inches at its widest.  I don’t have an exact volume as it relates to the ink capacity but this pen is no slouch when filling and is likely on par with that of the M600.  That’s not surprising since this pen appears most closely related to the M600.  Side by side, the Majesty is a tad larger than an M6xx and a hair smaller than an M8xx which  makes it a good fit for most people if you can get past the weight. 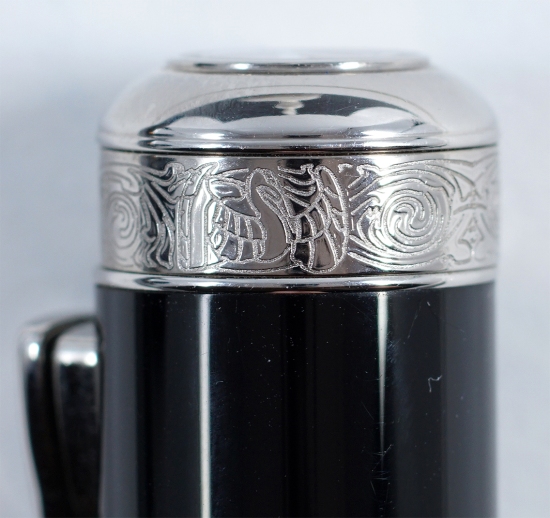 The Majesty series of fountain pens was only offered with 18C-750 gold nibs in medium and fine widths.  The nib is the same size as the M600 though the stock nibs have somewhat broader shoulders.  Any M6xx nib will fit the Majesty though I can’t help but feel the nib is a tad undersized for the pen.  Also, the scrollwork depicts concentric circles and feels just a little bit odd and out of place.  This model has a monotone look thanks to the rhodium plating on the nib.  Looks aside, the nib performs well, laying down a wet and generous line with a hint of spring but no significant line variation to speak of.  The feed also does a good job of resisting drying out. 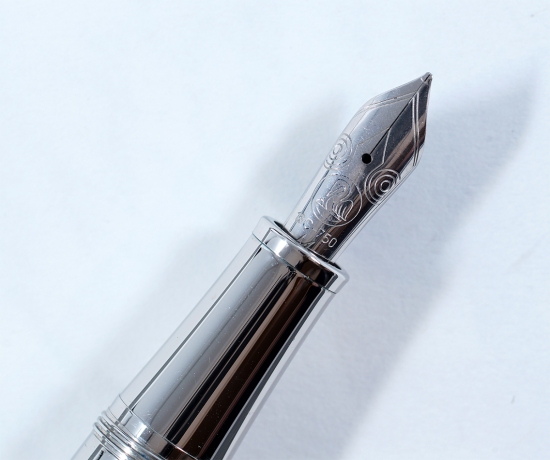 The Pelikan M7005 is a piston filled fountain pen but the implementation is somewhat different than what we are accustomed to with the Souverän line.  The filler is only exposed by removing the outer sleeve.  The exposed barrel looks almost as if it were an oversized cartridge/converter.  That said, it operates like any other piston filler utilizing the same differential piston that Pelikan has long been known for.  The piston travels smoothly along the length of the barrel and the piston knob has some texture making it easier to grip.  The nib can be unscrewed in order to facilitate lubrication of the piston assembly should the infrequent need arise.  At the end of the day, the Majesty seems as easy to maintain as any Souverän or Classic model. 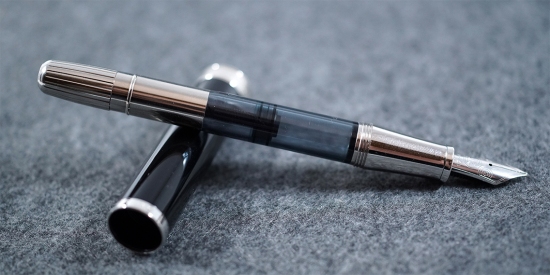 The Majesty has been discontinued since 2012 therefore these are best found on the secondary market though they only tend to come up somewhat infrequently.  Prices varied by region during the production years but these retailed somewhere in the neighborhood of $1400 when new.  While pricey, the pen is well constructed and a solid performer that comes across as a high end model without being overly ostentatious.  I think the pen has held onto its value over the years but there aren’t many auctions from which to extrapolate data. 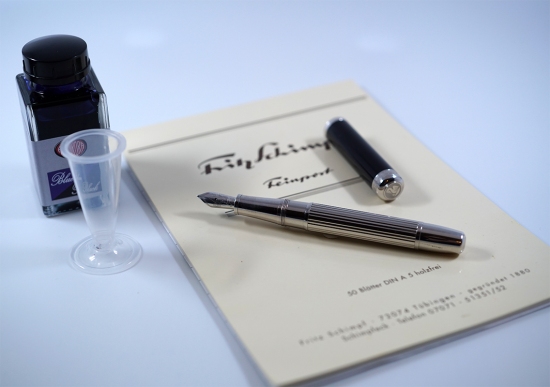 The M7005 Majesty and its gold counterpart the M7000 are definitely upmarket pens that were meant to punch a notch above the Souverän series.  They are larger models of nearly all metal construction with a style that feels very Pelikan.  The size and scrollwork of the nib are a little disappointing but the overall aesthetic of the pen is little damaged by these things.  If you are not afraid of a heavier pen and like the all metal construction, I don’t think you could go wrong owning this one provided you can find it at a decent price.

A Look At The Pelikan M7005 Majesty