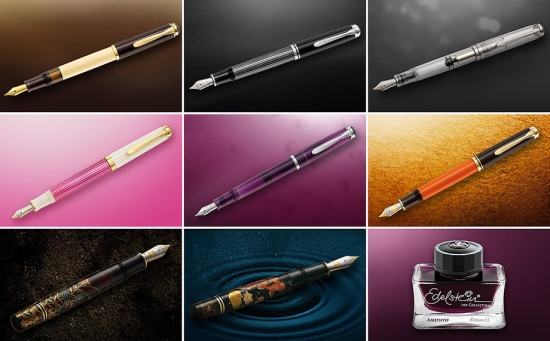 This has been a great year for new releases from Pelikan.  To recap, we’ve seen the M200 Café Crème, M805 Stresemann, M805 Demonstrator, M600 Pink, M205 Amethyst, and M800 Burnt Orange along with the two Maki-e releases, Autumn Flowers and Koi.  In addition to new pens, we saw the Edelstein Ink of the Year 2015, Amethyst, released to the community.  Finally, we are still expecting to see the re-release of the M200 Green Marbled fountain pen prior to year’s end.  This has been one of the most robust and varied years for new products out of Hannover that I can recall for some time.  With so many great pens to explore, one hardly has time to contemplate about what next year might bring.  While there have been no definitive announcements from Pelikan, rumors have quietly been circulating about what we can expect in terms of new releases for next year.  Details are minimal at this point but I thought that I would briefly touch on some of the upcoming products that I’ve heard whispered about.  Keep in mind, the following products are just rumored at this point and may not materialize though I’m confident we’ll see a few if not all of these come to pass.

UPDATED 12/20/2015:  News of early 2016 releases by Pelikan has helped confirm/deny some of the rumors originally outlined.  Also, further credible information has come to light about some other potential product releases so this post has been updated accordingly.

Edelstein Ink of the Year 2016 – Aquamarine 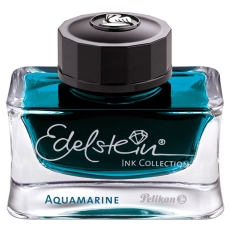 CONFIRMED.  Anticipated for release in the Spring of 2016.  Aquamarine is a color that is a bluish tint of cerulean toned towards cyan.  It is being described as, “neither blue nor green; it’s something in between” by Pelikan.  It is named after the mineral aquamarine, a gemstone mainly found in granite rocks. It will be available in both 50mL flacons as well as standard international cartridges.  Based on current pricing, the MSRP for a flacon should be 14.90 € ($16.40) and a tin of 6 cartridges 4.95 € ($5.45).  This is the fifth ink of the year release following in the footsteps of Turmaline (2012), Amber (2013), Garnet (2014), and Amethyst (2015).  The production run will be limited as is standard with the Ink of the Year edition.

CONFIRMED.  A pen designed to match the finish of the previously released M800 Tortoiseshell Brown (2013).  The brown striped barrel made of cellulose acetate will have subtle orange highlights as well as dark brown resin.  The clip and trim rings will be 24-carat gold-plated with a 14 carat bi-color gold nib.  I would expect perhaps a roller ball and ball point pen also to be available in this finish.  The first M400 Tortoiseshell Brown was released in 1984 with a modern version following though only produced for a very limited time circa 1999.  There was also a limited edition M415 Tortoiseshell Brown that came along in 2009.  This would be the first Brown Tortoise to grace the M4xx line in seven  years.

RUMORED.  Initially rumored as the “Forest Green,” new information would indicate “Royal Green” as this model’s designation.  Reportedly similar in appearance to the M600 Green O’Green (2011) but in a slightly brighter shade, though not as bright as the M600 Vibrant Green (2014).

CONFIRMED.  Reports of a Vibrant Blue M600 appear to have been inaccurate as evidenced by the announced release of the M805 Vibrant Blue.  Slated for release in February of 2016, it is described as, “bright blue with a complex structure like the sea.”  There should be translucency to the material.  Palladium trim will serve to accent the blue barrel and cap as well as the black piston knob and section.  Available nib sizes will be EF, F, M, and B.

CONFIRMED.  In 2014 we were given the M1000 Raden Starlight.  In 2013, it was the Sunlight preceded by Moonlight in 2011.  The series was launched by the M800 Kyokko & Gekko set in 2005.  Pelikan’s Raden Collection is absolutely stunning though often ultra exclusive and priced beyond the reach of the average collector/enthusiast.  Raden is a traditional Japanese decorative craft used for lacquer ware and woodwork.  Even though most of us will never own one, it is always exciting to see such beautiful pens.  This year is anticipating “Sunrise” as the next addition to the series.

CONFIRMED.  This is perhaps the most unusual rumor to grace talk of the 2016 line-up.  There is word that Pelikan is considering re-launching the original Green-Black 120 that was popular and in production from 1955-65.  Word is that this has been in the pipeline since 2014.  Expectations would be that this model would have a gold-plated stainless steel nib similar to the original.  This is the rumor that I would eye with the most skepticism but it is certainly not out of the realm of possibility and the source for this one has a reliable track record.  Only time will tell.

I would very much love to hear of any more information that you may have about these potential releases or any others anticipated for the 2016 line-up.  What do you think about these proposed pens?  Is Pelikan on the mark here or are they going astray?  Feel free to leave a comment or send me a message through the “Contact” form.  If these releases do come to pass, I think 2016 looks to be getting off to a rather solid start.

*All of the above products are merely speculative at this point.  I have it on good authority that we can expect several if not all of these in 2016.  I have no inside information though so the above should not be taken as confirmation of a definitive release.