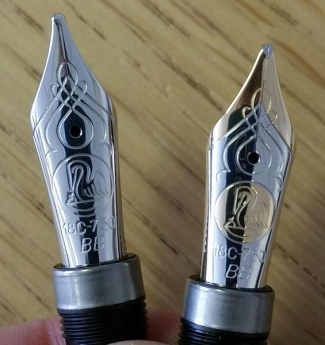 Pelikan has introduced over 40 different nib widths and styles during their 90 years of fountain pen production.  Time and market forces have slowly taken their toll, whittling away at the available variety and eroding character.  Around the year 2012, Pelikan discontinued production of oblique nibs in the widths of OM, OB, OBB, and O3B.  The following year, the larger BB and 3B nibs were also removed from the standard line-up.  Correspondence from representatives of the company around that time cited low global sales as justification for the discontinuation.  For the past six years, Pelikan’s fine writing instruments could only be purchased with nibs in the standard widths of EF, F, M, and B.  There have been exceptions to this rule as seen with the intermittent availability of an IB (italic broad) nib option or Niche Pens batch of M8xx BB nibs first offered in 2015.  Neither option has been widely available or part of the standard line-up.  Many have lamented Pelikan’s lack of variety, particularly as other manufacturers have continued to offer a significantly wider array of nibs.  One such example of innovation in the nib space that comes to mind is Montblanc’s Meisterstück Solitaire or 149 fountain pens equipped with a flexible 18C-750 gold calligraphy “expression” nib which can reportedly vary line widths from about 0.3 mm to 1.6 mm.  These calligraphy pens buck the familiar trend of hard as nails nibs, capitalizing on a maturing market of enthusiast looking for modern day flex writing pens.  While Pelikan has yet to venture into that space, we’ve recently learned, courtesy of Appelboom, that they are re-introducing IB and BB nibs, adding them to the standard line-up on a restricted basis.  Read on to learn more about the reincarnation of these older nibs as well as a few other tidbits.