When the Earth began to form sometime around 4.5 billion years ago, molten iron sank to the planet’s center, forming the core. Gold and platinum also migrated to the core leaving the outer layer of the Earth essentially devoid of any precious metals. It is now widely believed that nearly all of the gold content within the Earth’s exterior came from meteorites that bombarded the planet more than 200 million years after its formation. In other words, all of the gold within our beloved nibs is likely extraterrestrial in origin. Of course, not all gold is created equal. We use a karat scale to measure the ratio of gold to other metals or alloys within an item, also known as its fineness. The term karat has the same derivation as carat which is more commonly used for gemstones. Both words originate with the carob bean born from the carob tree (Ceratonia siliqua) which grows in the Mediterranean and has fruit pods that contain multiple seeds. A balance scale used to be the only way to effectively weigh something which meant that a counterbalance of known quantity was necessary, and it was once believed that carob seeds were uniform in size, making them the perfect unit weights. The karat scale that has since emerged ranges from 0 to 24 with 24 karats representing gold in its purest form. In 92 years of fountain pen production, Pelikan has utilized gold with four different degrees of fineness in their nibs; 12C-500, 14C-585, 18C-750, and 20C-833. The number in front of the hyphen refers to the ratio of gold to other metals whereas the second number is the millesimal fineness which denotes the percent of gold in an item. For example, a 12C-500 nib has 50% pure gold whereas the 20C-833 nib has 83.3% pure gold. Does that mean a 20C-833 nib writes differently or is in some way superior to its more impure brethren? Read on to find out. 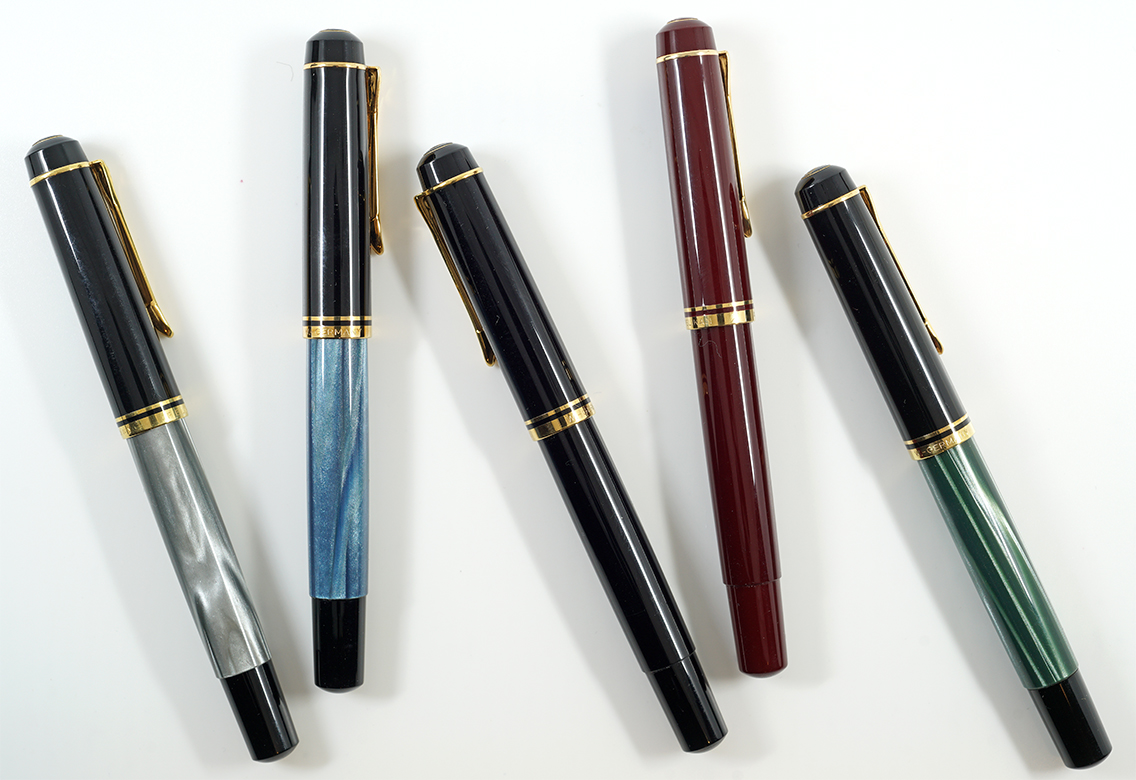 How well do you know Pelikan’s Classic/Traditional line?  Not as well as you might think I’m willing to wager.  Let us review; M100, check.  M150, check.  M200, M205, M215, and M250; check, check, check, and check!  Many of those model lines have since been discontinued but a few still persists and are being expanded to this day, some 35 years after the series’ introduction.  There is another entry into that line-up that is not nearly as well known and easily overlooked, even by the most hardcore of collectors.  Enter the #350.  There is a lot to unpack here so please bear with me.  First, let’s tackle that hashtag or number sign.  Most of Pelikan’s fountain pens have an ‘M’ or a ‘P’ preceding the model number.  These designate either a Mechanik-Füller (piston filling) or Patronen-Füller (cartridge) fountain pen respectively (though exceptions exists).  The ‘#’ was widely used in Japan during the 1980s and 90s for many of Pelikan’s piston filling models sold in that market and is therefore an appropriate regional prefix.  You might recall that I first introduced the concept when detailing the Mitsukoshi #660.  In addition to the unusual prefix, model numbers also sometimes differed.  For instance, the M400 used to retail in Japan as the #500.  Today, the regional sales literature generally adheres to the M/R/K/D prefix scheme and model numbers used elsewhere.  The #350 will be easier to understand when its predecessor, the #250, is considered so I will detail both of those models in this post.  Japan has long been a fertile ground for some of Pelikan’s most interesting releases, models not widely available anywhere else.  The Maruzen Tortoiseshell Brown M600, the Mitsukoshi #660, the East/West reunification commemorative M800, and the Merz & Krell 400NN re-issue were all either exclusive to the Japanese market or came about as a result of that market’s influence.  Read on to learn how the #250 and #350 models fit into Pelikan’s Classic series.