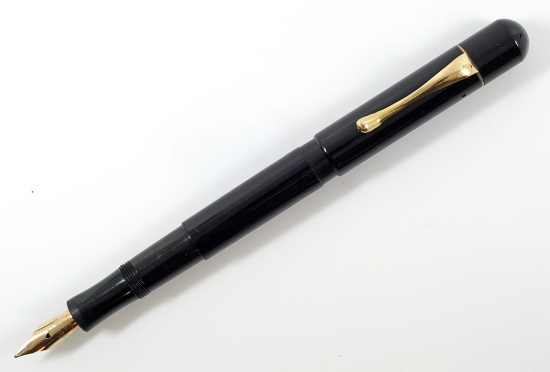 While browsing through some listings on eBay one day in late March, I happened to stumble across an auction titled “Vintage Pelikan Fountain Pen 14 Karat NIB.”  The nondescript caption led me to believe that the seller wasn’t quite sure of what it was they were trying to peddle.  The pen in question had seen better days, that much was obvious.  Upon closer inspection, the binde was missing and a few gouges marred the surface of the cap and filling mechanism.  It would have been easy to dismiss the listing and move on if it weren’t for the lack of cap bands.  They weren’t missing mind you; they just weren’t part of the design.  The look of the cap offered just enough hope and a promise of what might lie beneath.  Scrolling through the rest of the photos in the series revealed just what I had hoped to find, a nib with a heart shaped breather hole.  A holy grail for some, the ID became immediately clear.  While not in fighting shape, the pen was no doubt a 1929 Transparent Pelikan Fountain Pen and looked very serviceable for a 90 year old writing instrument.  Understanding that a major restoration would be needed, I entered the fray, placed my bid, and began the waiting game.   To my surprise and delight, I ended up winning that listing on April 1st.  The pen arrived a few days later and I half expected it to be an utter disappointment, perhaps with a note tucked inside saying “April Fools’.”  Once I was able to inspect it, I knew right away that it was worthy of restoration so I turned to Rick Propas, a fellow Pelikan enthusiast and friend, who agreed to take on the task of reconditioning the eldest of Pelikan’s fountain pens.  Such a project is not for the faint of heart or the inexperienced because disaster can befall at any step of the process.  With any restoration of this nature, concessions have to be made.  For instance, the early green bindes disintegrate when removed from barrels and spares are next to impossible to find.  Despite such limitations, I believe that the final product speaks for itself.  As an added bonus, Rick was kind enough to offer to document the restoration process.  Read on to learn how this wounded bird again learned how to fly as told by the restorer himself.

When my friend Joshua Danley asked if I would restore his recently acquired first year Pelikan, I jumped at the chance.  I normally do not solicit repairs, but the opportunity to work on one of these pens is not casually passed up.  Restoring any Pelikan from before the 1950s can be both challenging and rewarding, not just because the pens are now approaching ninety years of age and are made of delicate materials, but because these early Pelikans are unique in their design and require great precision to work at their best.  I have written elsewhere of the design of the original Pelikan as an expression of German modernist or Bauhaus design.  That means that the pen is constructed both logically, though differently, then most other pens.

Restoring a first year Pelikan can be both high stakes and worthwhile, starting with its basic design and construction.  To begin with, the barrel is not made of the usual celluloid but Bakelite, a material that can be both brittle and sensitive to heat.  At the same time, the signature Pelikan piston filler mechanism is made of hard rubber.  So the first challenge is opening the pen, which may have leaked ink into the back of the barrel effectively “welding” the barrel and mechanism together.  You can use heat on the filler but be careful with the barrel.  Soaking and ultrasonic use are also challenging as they can weaken the barrel and discolor the hard rubber.  Presented with this scenario, one restorer I know simply jigs up the barrel and drills out the filler.  Sometimes it is the only answer.

What follows are images of the restoration of this pen along with commentary in caption form (click on any photo to enlarge). 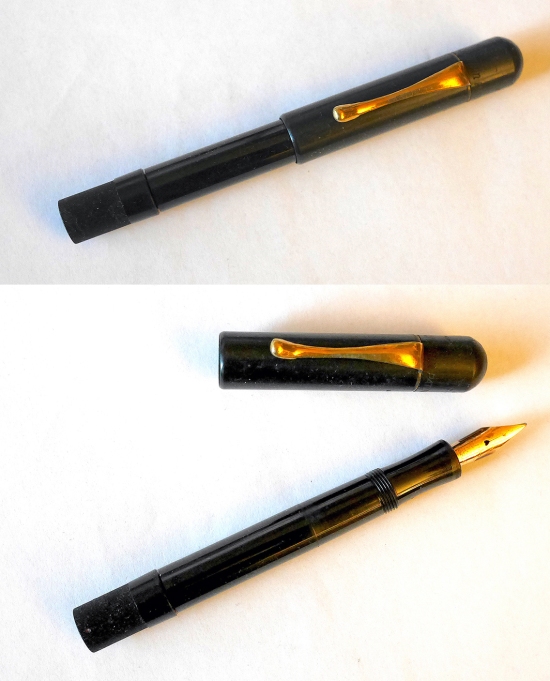 The pen as it came to me. Note the missing decorative band around the barrel

This is the tricky part, opening the reverse threaded mechanism mounted to the Bakelite barrel 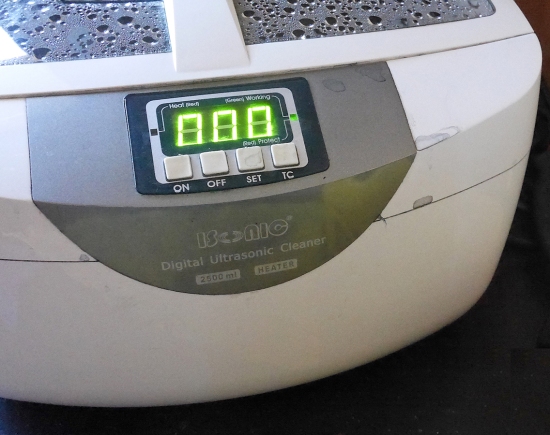 The ultrasonic is best used, if at all on older Pelikans, only with extreme caution 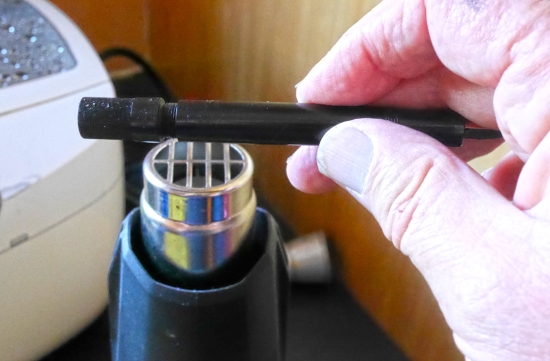 Heat is the key to opening the pen, but only the right amount.  Too much brings disaster, especially with a very delicate and uncommon pen 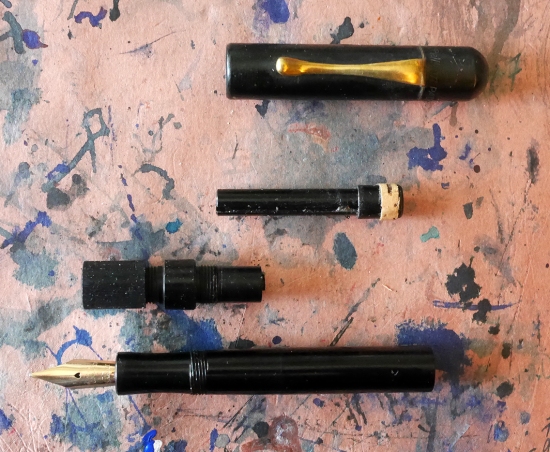 The cap top showed work marks and here I used gentle heat to minimize them since replacement was not even an option.  The filling mechanism also showed work (plier) marks.  I could have replaced the filler, but decided to leave this pen as intact and original as possible 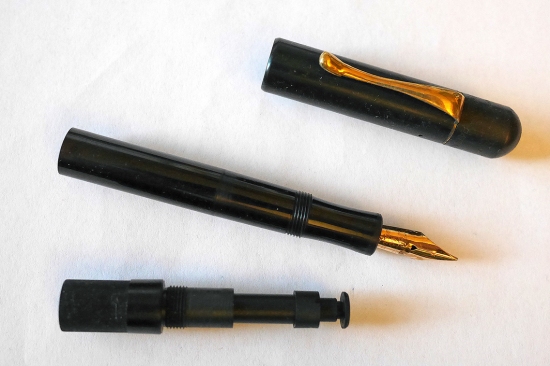 The pen disassembled, cleaned, and ready to be re-corked 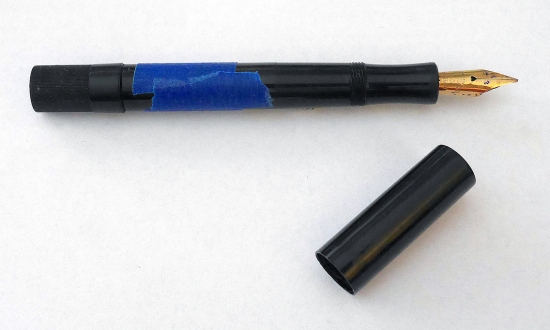 Normally, one simply tacks the binde to the barrel with a bit of shellac.  Here, the binde was too large so painter’s tape was used to shim.  For more information, see Robert Pirsig’s “Zen and the Art of Motorcycle Maintenance.”  Since the barrel of this pen was slightly larger in diameter than any of my 100 bindes, I had to use this, originally from an early 100N.  However, both the length and diameter were longer than the standard 100 binde, thus I had to shorten the binde by about 2mm.  This is best done from the back 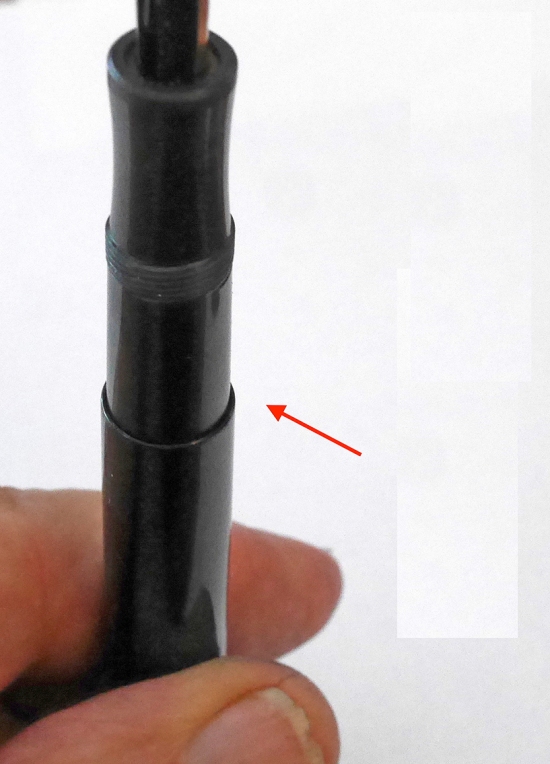 Note that the binde, originally made for an early 100N, is too wide at the top.  The answer here was to shave the binde so that the cap would not interfere 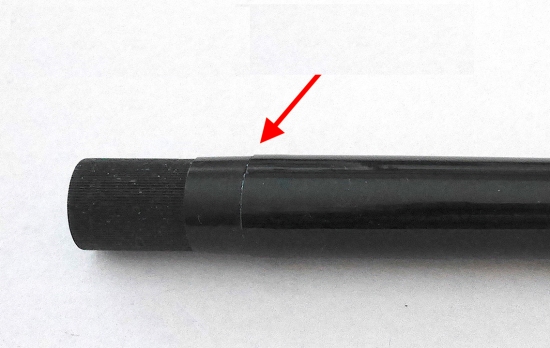 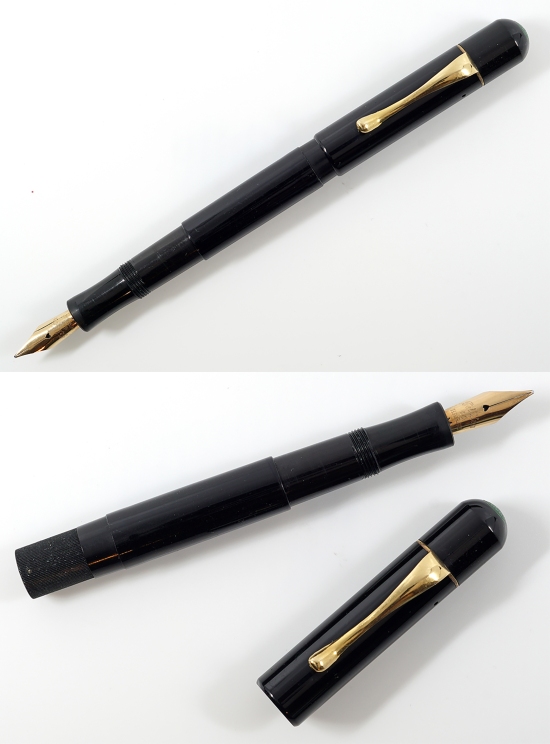 The finished product, posted and uncapped 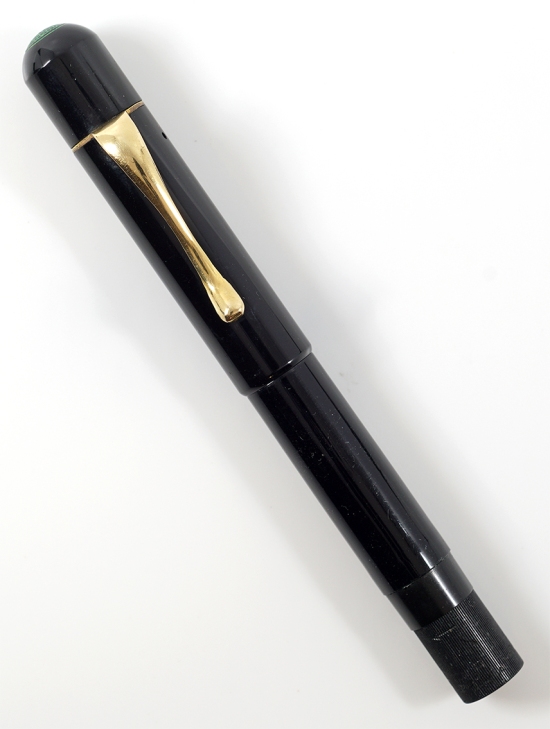 I hope that you have enjoyed this special guest post.  Personally, I find it fascinating to pull back the curtain and see how a broken pen is made whole again and am grateful to Rick for his efforts on my behalf.  If you have relished learning a bit about the 1929, stay tuned because there is a lot more to come with regards to the first year Pelikan.  In the meantime, please feel free to share your thoughts below.

Rick Propas has been collecting pens since 1984.  He helped found the Pan Pacific Pen Collectors Club in 1994 and has been an editor of the PENnant.  He also established fine writing instrument departments at Bonhams and Swann Auction Galleries.  Rick taught United States history at San José State University from 2002 until his retirement in 2014.  He is a well-known collector of the Pelikan brand (amongst others) and the sole proprietor of the The PENguin.