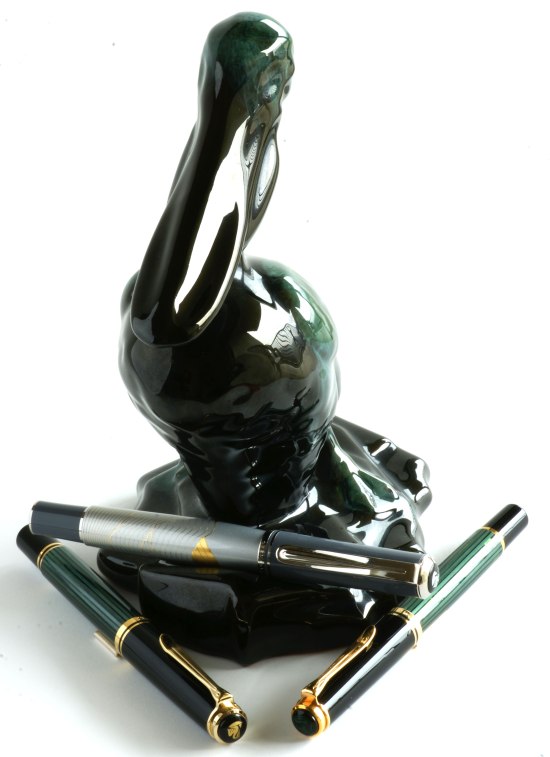 This is the third and final installment of my series exploring the M600.  In my first post, I endeavored to explore the differences between both the old and new style M600’s.  The second post reviewed those pens from the two different eras in a head to head comparison.  For this post, I wanted to focus on another member of the M6xx family, one that defies the usual styling of the series and makes it somewhat of an oddity in the line-up.  The pen up for review here is the M640 Mount Everest, released in 2008.  This pen is part of the “Beauty of Nature” series which is composed of six pens in total released from 2007-2011.  The theme behind these pens is centered upon celebrating the beauty of the natural world around us.  What makes this series somewhat unique is that there are several departures in design from most of the other pens in the Souverän series, regardless of model, which I will try to highlight below.  This departure in design has polarized some of the fan base as many have found it difficult to embrace certain design elements.  The pen being reviewed today is from my personal collection but this review should be able to be generalized to all of the pens in the series.

The M640 is a departure from the standard Pelikan aesthetics.  I like the variety that this line injects into the series but I understand that the looks of this pen do not suit everyone.  First, the clip is not the traditional pelicans beak which I have seen some people very upset over.  It is true that this clip is much broader and less stylized but it does not feel out-of-place and compliments the other design elements well.  I like that there is only a single trim ring at the piston knob and the plated, reflective finish at the apex of the piston knob is a nice flourish.  There are six different designs that have been released over the course of the series and I tend to favor Niagara Falls, Sahara, and Polar Lights.  While the others are still nice, I don’t find them as striking as the first three releases.  I like that the design on the barrel is not tactile but rather a smooth lacquered finish.  What is interesting is that the barrel bows out at the middle.  I find that this is surprisingly comfortable in my hand, even for longer writing sessions but I have heard some take issue with this element.  The choice in design that is the biggest let down for me is the lack of an ink window.  I love how I can gauge the remaining ink level on almost all Pelikan’s.  It is by far and away one of my favorite features.  These pens have no way of gauging the remaining amount of ink which is perhaps my largest gripe about the design.

There is no evidence of fragility here and I have no reason to believe that these pens will not endure.  With regular use, my pen still looks like new.  I imagine with heavy use and the accumulation of multiple years, there could be wear to the lacquer finish and perhaps damage to the underlying design but only time will tell.  The piston mechanism is a thing of precision and the overall feel of the pen conveys confidence that it is a sturdy writing implement.

These pens are very different from the others in the M6xx family.  The metal barrel provides a certain degree of heft which is not insubstantial and is not found on others in the family.  It weighs 1.16 ounces which is about 0.55 ounces heavier than the modern M600.  In fact, it is actually heavier than the M800 (1.03 ounces) and only just under the weight of an M1000 (1.20 ounces).  The pen is 5.31 inches long when capped and 6.14 inches when posted.  The diameter is 0.55 inches.  As you can see in the picture below, the pen is a bit taller and wider than the modern M600 and much more significantly so when compared to the old style M600.

The nib on my pen is an 18C-750 gold two-toned nib.  All of the other pens in the series except for the Sahara have an 18C-750 monotone rhodium plated nib.  The two-toned nature of the Mount Everest nib compliments the topography of the barrel nicely.  In terms of performance, it is exactly what I would expect from a modern Pelikan.  My version of this nib is fine and does indeed put down a line relatively true to its designation.  The line is wet and generally smooth, without significant tooth.  Like most other modern nibs, there isn’t much spring to speak of as the nib is rather firm.  This is not an issue for me as I do not have a good command of a flex nib but certainly is a consideration for some.  The nib is removable like most of Pelikan’s other offerings and therefore can be swapped or customized very easily.

The filling system is based on Pelikan’s historic piston mechanism and is not any different from their other models.  It travels smoothly and the piston knob seats nicely against the barrel.  These modern pistons are very durable and should provide trouble-free service for quite some time.  As stated above, the nibs can be unscrewed to facilitate flushing and application of silicone grease when necessary making these pens very user-friendly and serviceable.

Whether it’s the odd shape or the atypical appearance, it seems that these pens are somewhat more affordable than some other special editions that have been released.  No longer in current production, any examples would have to be picked up as left over stock or found on the secondary market.  Prices at auction range from $235 – $400 depending on the model.  These are nicely styled pens that have a substantial feel in the hand and are unique in the Pelikan line-up.  Given that they provide the type of writing experience that you would expect from a Pelikan, I think that it makes them a good buy.

I find the M640 somewhat refreshing in terms of the unique barrel design and really appreciate the heft of the pen without having to step up to the M800 or M1000.  If you prefer a heavier pen, this may be a more affordable option than either of those.  Some of the earlier designs are more eye-catching to me but that is purely a matter of taste.  Many people take issue with the design elements chosen but I feel they work well with this model and are not at all out-of-place.  This pen is classified as an M640 but it has neither the shape, size, or weight of any other pen in the M6xx line-up so while that is its technical designation, it feels more like it was placed there for a lack of a better location.  At the end of the day, my biggest complaint about this pen and the whole series is the lack of an ink window.  I value being able to gauge how much ink is left in my pen because I only carry one at a time.  While you could fill the pen regularly to avoid running out, I like that my other Pelikans are hassle free and don’t require this of me.  Despite that issue, I like my M640 very much and would certainly pick up others in the series if the opportunity presented itself.

A Look At The Pelikan M640 Mount Everest

Part 3: Review: The M640 – An Oddity Amongst M6xx Special Editions