This is the second installment of what I intend to be a three-part segment looking at the M600.  The first post, “A Tale of Two M600’s,” looked back at the history of the M600 and the design changes which occurred in 1997 that forever altered the physical appearance as well as the fit-in-the-hand of the pen.  Where that post focused on the origins of these pens, this post will be a direct review, a head to head comparison of the pre-1997, old-style M600 versus the post-1997, new style M600.  It is important to look at the two side by side because even though they share the same moniker, they are very different pens and will therefore appeal to different people.  Interestingly, years ago when I looked to branch out and try a bigger pen, I decided to seek out an M600, mostly due to it’s more budget friendly appeal when compared to an M800 or M1000.  Not knowing much about the pen at all and not having the knowledge of sites such as this one, I purchased an M600 on the used market only, much to my surprise, to find it the same size as the few M200 and M400 models in my collection.  I thought that a mistake had been made and, at first, was upset until I learned what I have already shared with you in part one of this series.  Once I realized that the confusion was all mine, I was actually very pleased with my acquisition and soon followed it up with the post-1997 variant that I had initially envisioned.  Those two pens from my personal collection are what I will review for you today.

Both of these M600’s have a very striking design without being particularly showy.  They are as well suited for the board room as much as they are for use in the home or anywhere a pen may be needed.  The big difference that strikes you when these pens are held side by side is the size of the pens with the new style being noticeably larger (as discussed below).  Other than that, the old style has a single, somewhat thicker trim ring at the piston knob whereas the new style has the double trim rings now very recognizable across all modern Souverän pens.  The cap tops also differ in that the older model has an etched logo and the newer model is the screened/painted version.  Both have Pelikan beak clips, double cap bands, two-toned gold nibs, and a trim ring at the section.  Size not withstanding, the differences between the two are subtle and certainly any preference for one over the other would be a matter of subjectivity.  That said, I do favor the old style M600 ever so slightly given the overall appearance when capped with that single trim ring at the piston knob and the etched cap top with the painted green Pelikan logo.  For that, the old style pen scores an 8.5 while its more recent sibling gets an 8.

Even the most beautiful pen in all the land is essentially worthless if it is too precious or fragile to be used on a regular basis.  Thankfully, these pens do not come off as fragile at all.  They have a robust feel in the hand and never have I ever had any concern about their durability.  They have a nice fit and finish and no appreciable seams.  The striated barrel which allows some translucency to evaluate ink levels is particularly attractive and functional.  There are some reports amongst those in the community and I have seen photographs of the barrel snapping off cleanly at the section when the pen is dropped.  I’m sure that this is a stress point for Pelikan pens in general and is not specific to the M600.  I have never encountered this problem myself but I am also not in the habit of dropping my pens.  If you are, this may be something worth considering. 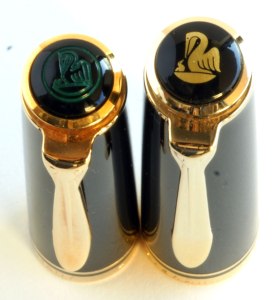 These pens definitely provide a different feel in the hand which is the most likely reason that one would favor one variant over the other.  The old style M600 is 5 inches capped and 5.83 inches when posted.  It has a diameter of 0.46 inches and a weight of 0.53 ounces.  This is contrasted against the new style M600 which is 5.28 inches capped, 6.02 inches posted, has a diameter of 0.49 inches, and a weight of 0.61 ounces.  The difference in length is certainly noticeable.  I would say that the change in weight that the size difference confers is rather negligible.  Make no mistake about it, these pens are light.  If the weight of an M200 or M400 hasn’t suited you, the M600 may not be to your taste and an M800 with its brass piston assembly may be more to taste.  I find both pens comfortable for long writing sessions.  I post all of my pens and both pens have excellent balance when posted.  If you don’t post, the new style M600 is certainly a bit more comfortable to use.  I have medium-large hands and can use both pens without difficulty.  Given the slight step up in both diameter and length, the new style M600 just feels a slight bit more substantial and therefore edges out the its older sibling with a score of 9.5 versus 9.

As previously mentioned, Pelikan went through three variations with the nib of the M600 after they were introduced in 1988.  My version is the later nib from 1990-97 so this review is not applicable to the 18C-750 monotone nib used from 1985-1988 or the 14C-585 two-toned nib used in 1989. The 18C-750 gold nib of my old style M600 is quite springy with perhaps even a hint of flex and puts down a smooth fine line that is generally wet like most Pelikans but perhaps less so given the fineness of the line.  The new style M600 also puts down a fine line but, like most other modern Pelikans, the nib is without significant spring, often described as a “nail.”  That is not necessarily a bad thing but if spring and flex are your interests, than this is not the nib for you.  One could argue that the lack of spring is because one nib is 18C and the other is 14C but this lack of spring extends to the modern 18C nibs so I believe it is more likely a characteristic owing to the date of production rather than the materials used.  Between the two, however, I would favor the springiness of the old style 18C-750 gold nib.  Going in favor of both pens is the ability to remove and replace the nibs which is a great boon for maintenance, repair, replacement, or customization.

The filling system employed by both of these pens is Pelikan’s legendary piston filling mechanism.  As such, the piston has a noticeably smooth travel and provides nearly a full fill on a single stroke.  These are friction fitted assemblies though so removal is not straight forward and repeated attempts to do so can lead to damage.  Thankfully, the reliability of the piston means that this is rarely ever necessary and these piston seals are quite durable when properly cared for.  The nibs can be unscrewed to help facilitate flushing as well as allow the reapplication of silicone grease when necessary making these pens very user-friendly and serviceable.

It is here, when examining cost and value that I feel the most let down by the pens.  The old style M600 is somewhat more difficult to find these days and commands an average of $250-300 in the auction market.  Pelikan has continued to increase the cost of their pens over the years such that the new M600 has an MSRP around $500 and is often found for sale between $300-400 with special editions more commonly in the $400’s.  I understand that the expense of production rises over the years and that there needs to be a certain amount of that passed onto the consumer to remain viable.  One of the things which initially attracted me to the brand was the affordability of even some of their more premium lines which was in stark contrast to some other well-known high-end pen manufacturers.  This distinction has become much less over the years but I still find the brand to be a good buy, just not as well suited to the variety of budgets that it once was.  There is a thriving secondary market out there so many deals can be had if you choose to purchase used rather than new.  The old style M600 edges out the new style here as the consistent demand for it is likely to help maintain its resale value.

I love both of these pens and am happy to have them in my collection.  I think that the design is classic, the dependability is without question, and both pens provide a comfortable writing experience.  Much of choosing one pen over another comes down to personal preference as much of the distinction between the two is subjective.  At the end of the day, I don’t think that you could go wrong with either pen.  Both have their place.  If I had to pick one over another in terms of looks and writing performance only, I would most likely choose the old style M600.  If size is what mattered to me at the time, then I would be very happy with the new style M600.  The rising cost have made the M600 less of a bargain with many turning to either the cheaper and smaller M400 or the heftier M800 but the M600 does satisfy a sweet spot for many users and should not be discounted.

Part 3: Review: The M640 – An Oddity Amongst M6xx Special Editions