Many of the preeminent innovations and game changing inventions throughout the history of human civilization have had but one thing in common: they were born out of curiosity.  The drive to push towards new ideas and experiences thereby unlocking limitless potential is a basic human attribute.  From the Acheulean hand axe and the control of fire to space exploration and self-driving cars, curiosity is a powerful motivator for learning and influential in decision-making.  It is one of the pillars upon which the advancements of society have been built.  It should come as no surprise then that curiosity has also helped drive innovations in fountain pen design.  Mention of a primitive reservoir pen can be found dating back to less than 1000 years Anno Domini.  The Romanian inventor Petrache Poenaru was one of the first to be granted a patent for such a design in France on May 25th, 1827.  Pelikan entered the market with their Transparent Pelikan Fountain Pen in 1929 featuring Theodor Kovác’s differential piston filling mechanism.  The steady evolution of the fountain pen meant added complexity and many of the competing manufacturers of the early twentieth century were eager to show off their pens and make the case for why their design was superior to others.  Pelikan was no different in this regard and therefore outfitted their sales representatives and stationary shops with special pens that revealed the model’s inner workings.  Likely starting sometime in the early 1930s, the hard rubber components of the 100 were skeletonized or cut away to create non-functional models, not available or intended for resale.  It is unclear in what capacity these models were utilized but make no mistake, this was the birth of the demonstrator, just not the ones we commonly think of today.  Those came about later, with the advent and mass production of clear plastics.  Examples exist of the 400 and 400NN from the 1950s and 60s done in green or clear shades of transparent plastic.  Many of Pelikan’s demonstrators from the 1950s through the 1960s were low production volume items carried by reps and delivered to stationary shops, which makes them scarce and highly collectible today.  Eventually, such pens would catch on with consumers and grow in popularity.  No longer relegated to life as a sales tool, demonstrators would grow into their own and become special edition releases.  Pelikan’s first major modern foray into the demonstrator was the Transparent Green M800 released in 1992 which they quickly followed up with the M810 Blue Ocean in 1993 and a multitude of other demonstrators since.  Read on to learn more about the origins from which today’s demonstrators hail.

An original model 100 demonstrator capped (above) and uncapped (below) with cut aways in the hard rubber to demonstrate the pen’s components. Photo courtesy of Gerhard Brandl (www.crapplack.eu)

It wasn’t until 1931 that the model 100 as we know it came to be named, settling into what is now it’s widely recognized form.  It was probably shortly thereafter that Pelikan’s first “demonstrator” model came about though it is unclear what terminology was used for it at the time or in what capacity they were employed.  They may have been provided to representatives to help with sales, but their scarcity speaks against this.  It is also reasonable to consider that these may have been educational pieces, used at the factory in Hannover to school young apprentices in the art of pen making.  These unique items consisted of nothing more than a standard 100 with pieces of hard rubber cut away to reveal what lay underneath.  This is instructional in telling us which features the manufacturer felt were the worthiest of highlighting.  To start, the cap had two or three areas cut away, likely intended to illustrate the position of the nib when capped and to tout the cap’s ability to equalize pressures thereby preventing the burping of ink and subsequent inky fingers.  The section had a cut out to demonstrate how the removable nib was seated and the ink view window allowed for visualization of the piston seal while a cut out in the barrel showed the piston guide and rod.  Finally, the piston knob was split in half to reveal how it actuated the spindle.  Similar demonstration pieces would follow with the introduction of the 100N.  None of the models described so far were functional pens, but they weren’t meant to be either.  These types of early demonstrators are very scarce today and are the rarest of Pelikan’s transparent models.  Sometime towards the end of the 100N’s production run in the early 1950s, the cut aways were done away with in favor of a transparent barrel and cap top making for a semi-demonstrator of sorts of which a few examples are known to exist.

A 100N semi-demonstrator with clear plastic components to better illustrate the pen’s features. This likely bridged the gap between Pelikan’s original demonstrators and the models that we know today. Photo courtesy of Gerhard Brandl (www.crapplack.eu)

The trend towards functional demonstrators would come with the adoption and mass production of transparent plastics.  During the 1950s, the 400 revived the company’s post war fortunes.  In that pursuit, the practice of making demonstrators continued, this time in the form of fully functional pens which could now effectively illustrate how a pen fills.  Clear plastics meant that cut aways were no longer necessary.  Examples of the 400 and 400NN can be found in green and clear transparent colors respectively.  Delivered to stationary shops in order to better demonstrate the features of the actual sale models, these pens were also never mass produced for public consumption.  Taking the 400NN by way of example, the inner cap and the metal liner at the base are easily discerned.  You can clearly see the underside of the beak clip stamped “400NN.”  The section again shows the screw-in nib characteristic of the brand’s models and the spacious ink reservoir is on full display.  These models also do an excellent job of demonstrating the differential piston mechanism which includes the piston seal, rod, guide, and knob.  This piston rod is done in a translucent plastic to allow for visualization of the spindle below.  These are the first demonstrators that resemble how we’ve come to know them today though these remain rare and highly collectible finds.  Other examples of working demonstrators that can be found from this era include the 120, 140, 300, P1, MK 20, and MK 30.

Stepping into more modern times, we have seen a wholehearted embrace of the demonstrator.  By my rough estimate, there have been no less than 15 Souverän and 25 Classic series demonstrators made and released since the early 1980s, most of which were sold as special editions.  The first of these, the Clear Transparent M481, is perhaps one of the more mysterious and likely came about in the early to mid 1980s.  Few details are known but this likely represents the oldest Pelikan demonstrator of the modern age.  In 1988, an M200 Green Transparent was released to the USA in order to celebrate the company’s 150th anniversary.  A larger M800 Transparent Green Collector’s edition fountain pen would follow next.  Born of a request originating from the United States circa 1991, this model was released for sale in 1992 as part of an unnumbered production run.  The success of this model paved the way for the M810 Blue Ocean the following year, Pelikan’s first official limited edition.  These models were popular with collectors and spurred further editions down the line.  In 1994, the Blue Transparent M150 was produced on order from the Bols Company of the Netherlands, the world’s oldest distilled spirit brand dating back to 1575, as a run limited to just 3000 fountain pens.  Perhaps one of the most notable demonstrators to date has been 2008’s M800 Clear Transparent which was released to celebrate the company’s 170th anniversary.  This model came with a cut out in the brass connector to allow for visualization of the spindle and spindle nut.   A separate version was released which labeled the parts of the pen, taking the demonstrator concept to a new level.

Of course, not everyone loves the modern demonstrator concept.  The design is fairly polarizing within the pen community.  Many enjoy them due to the ability to visualize the ink while others appreciate the engineering, but these translucent models do have their detractors.  Common refrains include a perceived cheapness of the overall appearance as well as a general unease with the increased likelihood of staining.  It is true that demonstrators might age more poorly compared with others if not cared for properly (and sometimes even when cared for properly).  Others cite the distraction caused by seeing the inner workings and feel that is a view best left to the showroom floor and not the pen cabinet.  All points of view are valid and thankfully the pen world is full of variety.  Personally, I appreciate the demonstrator for what it started out as and what it has become today.  Are they the Crown Jewels of my flock?  No, that they are not, but the flock wouldn’t be the same without them and I appreciate these translucent models for the variety that they introduce into the collection.  Feel free to leave a comment and let me know your thoughts on the demonstrator concept and please consider participating in the poll below.  Also, I would like to thank Gerhard Brandl and Dominic Rothemel for their assistance in composing this article. 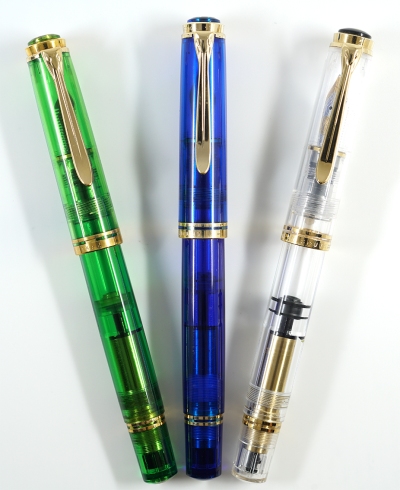