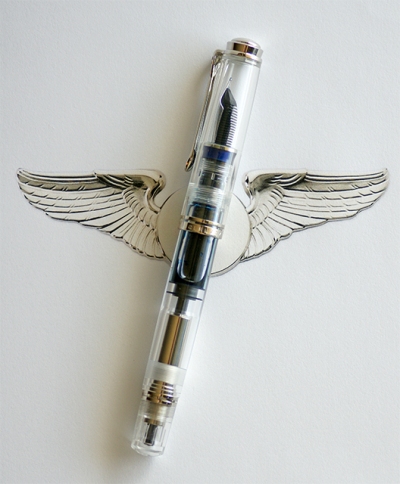 Today’s post comes to you from an altitude of  32,900 feet at speeds of 500+ mph.  It isn’t often that I fly but, when I do, I always feel very comfortable taking my Pelikans along.  I understand that this can be a topic of concern for fountain pen aficionados as stories of in-flight inky disasters abound.  I thought that a post about flying with a Pelikan (as well as just about any other piston filled fountain pen) would be timely.  The good news is that air travel with fountain pens can essentially be worry free if you adhere to a few general principles.

To start the discussion, let us examine the underlying issue; cabin pressurization.  In the early days of commercial flight when fountain pens were in their heyday, airplane cabins were not pressurized.  Passengers were required to wear oxygen which was in short supply at the ever increasing cruising altitudes made possible by improved engine technology.  In 1940, the Boeing 307 Stratoliner was the first commercial aircraft to offer a pressurized cabin with a cruising altitude of 20,000 feet.  This innovation has long since been the standard on all commercial aircraft.  Cabin pressure is regulated by an outflow valve which is wide open when the plane is on the ground (cabin pressure = atmospheric pressure).  Prior to take off, the pilot sets a cruising altitude on a pressure controller.  Once the airplane’s wheels are off of the runway, the outflow valve begins to close, thereby pressurizing the cabin.  As the plane climbs to cruising altitude, the cabin pressure decreases and ultimately becomes equivalent to what might be present at 7,000 feet above sea level (cabin pressure < atmospheric pressure).  The rate of pressurization is gradual and usually occurs over 20-30 minutes.  While the airliner may be climbing thousands of feet per minute, the passenger experience is actually much milder with a pressure change equivalent to a climb rate of only 350 feet per minute.  As the plane descends, this process reverses and the cabin pressure increases until it equilibrates with the atmospheric pressure of your destination.

Air travel prior to 1940. Note the requirement for supplemental oxygen during flight in an unpressurized cabin.

It is the change in pressure outlined above that can be problematic for fountain pens.  Seventeenth century chemist and physicist Robert Boyle teaches us that pressure and volume are inversely proportional at a constant temperature (illustrated in the graph to the right).  As a plane ascends and pressure decreases, volume increases at a similar rate.  Any closed container, such as a pen’s ink reservoir, will undergo an expansion of the air trapped within.  If a pen is pointed nib down, the air will rise to the piston seal and the ink will settle against the feed.  As the volume of air expands, the ink will be pushed out of the feed/nib resulting in an inky mess.  The table below illustrates Boyle’s law and the magnitude of gas expansion one could expect at various altitudes.

With the problem now well delineated, we can look at how to mitigate any issues that might arise.  Since trapped air is the enemy, you would be best served by having the ink reservoir empty and cleaned negating the entire issue.  For many of us, that is neither practical nor convenient.  The alternative, which may not seem intuitive, is to keep the ink reservoir as full as possible thereby leaving very little residual air and minimizing gas expansion.  Should you find yourself ready for take off but with only a half full pen, you could take advantage of Pelikan’s ink view window and move the piston forward until all of the visible air is expelled from the ink chamber.  While helpful, this is not usually necessary with today’s pens provided that you keep it stowed with the nib in an upwards orientation.  With the nib up during ascension to cruising altitude the expanding air is harmlessly expelled to the atmosphere.  If all else fails, there is some leeway as most modern feeds are capable of absorbing some degree of excess ink provided that you aren’t flying with a half full pen in the nib down position (worse case scenario).  Descent is not nearly as problematic because cabin pressure is rising resulting in air wanting to be forced into the reservoir rather than out.

Pelikan M805 Demonstrator. Left: Arrow depicts the direction of escaping air with expansion at lower pressures. No significant amount of ink leakage should occur with the nib pointing up. Right: When the nib is pointed down, expansion of the trapped air will force the ink ahead of it out of the reservoir and into the feed resulting in leakage.

If the pen is on its side, the expansion of trapped air has the potential to cause the nib to leak ink.

While the above concepts are applicable across brands and filling systems, I can only attest to the general ease with which Pelikans fly.  In this post,  I have focused on internal piston fillers but cartridges and converters will also be affected in a similar manner.  I do believe that extra care should be taken when flying with vintage fountain pens (produced prior to 1970) as they are more of a mixed bag in general though this certainly should not dissuade you.

Other considerations when flying are issues surrounding the regulations dictated by the Transportation Security Administration (TSA).  Fountain pens are not prohibited and are able to be brought aboard aircraft without issue.  Most people have not encountered any difficulties but it’s important to note that at the point of inspection, the TSA  does have the final say regardless of posted prohibitions.  I’ll leave you with a few final thoughts on traveling with ink as it goes hand in hand with fountain pens.  Boyle’s law also holds true here but since you open a bottle of ink from the top and gravity keeps the liquid ink at the bottom of the container, it is a non-issue.  As far as the volume of ink goes, you are allowed up to 100 ml of a non-flammable liquid to be carried on board in your carry-on bag according to the TSA.  Anything more than 100 ml is mandated to go into a checked bag or be forfeit.  You can see more about prohibited items at the TSA’s website.

Flying with a fountain pen do’s and don’ts