The Souverän M300 did not burst onto the scene with any fanfare.  There was no large, elaborately orchestrated debut such as what we saw with the M800 some eleven years earlier.  Perhaps the lack of flourish was fitting given the pen’s diminutive and unassuming size.  It was 1998 when the M300 emerged as the smallest Souverän in the line-up.  News of Monica Lewinsky’s affair with Bill Clinton was just breaking, the XVIII Olympic Winter Games were being held in Japan, and Titanic became the first motion picture to gross US$1 billion.  The late nineties were also a time of great change for Pelikan’s high end models.  The M400 received an upgraded trim package, the M600 was given an entirely new form, and the massive M1000 would take up the mantle as Pelikan’s flagship.  All of the furniture on the company’s Souveräns was standardized, essentially creating five models, each representing a different sized pen catering to a variety of tastes and purposes.  The marketing which would follow highlighted this; “You can buy suits in different sizes.  So why not fountain pens?”  Amongst Pelikan’s refreshed line-up, the M300 fit the smallest niche, both literally and figuratively.   Not much larger than your standard golf pencil, the M300 has ruled over its tiny kingdom for 22 years.  That reign comes to an end in 2020 as the model line has now been officially discontinued.  I was first alerted to this fact by vendors who could no longer order new stock and it has subsequently been confirmed to me by Juana Schahn, the Social Media Manager for Pelikan.  Read on to learn the how’s and why’s behind the pen’s demise and get a glimpse at some of the M300’s history over the past two decades.

Perhaps it should not come as a surprise that the M300 is no more.  The signs have been pointing that way for some time now.  There has not been a new special edition since 2011 meaning the Green/Black (striped) M300 has been the only current production model in that line for the past nine years.  To understand why this has been the case, you need to know the purpose for which the M300 was designed.  Step back with me into a time when analog agendas and planners were ubiquitous and digital calendars were just a fledgling novelty on your Blackberry or Palm Pilot.  The small size and easy portability/storability of the M300 positioned it as the perfect companion piece for these types of everyday essentials.  Well suited to the tasks of jotting quick notes and planner entries, it frequently proved to be too small for comfort when utilized for extended sessions such as with letter writing or journaling.  As advancing technology made paper planners much less necessary for a large portion of the population, the popularity of and demand for the M300 has fallen off sharply.  Over the years, production lots have shrunk accordingly and this year Pelikan has finally decided that the continued production of the M300 line is no longer economically feasible.  I’m sure that the current global realities and economic hardships brought about by the coronavirus pandemic have only hastened that decision.  It should be noted that production is continuing on the other four model lines in the Souverän series: the M4xx, M6xx, M8xx, and M10xx.

The M3xx line of pens are relatively small in the hand, even when posted

The introduction of the M300 did muddle the issue with the company’s product naming scheme, as Pelikan is wont to do.  Ascending product numbers usually indicate a larger size so an M400 is easily recognized as smaller than an M800 and both are dwarfed by the M1000.  If you focus exclusively on the Souverän series, this scheme is both clear and firm.  Things get confusing because of the Traditional or Classic series which is comprised of models encompassing the M1xx and M2xx product ranges.  If your experience was limited to those lower tier models, you might expect an M300 to be larger than the M200 but this is not the case, resulting in no small amount of confusion for consumers over the years.  Suffice it to say, the M300 is in fact the smallest Pelikan amongst all of the company’s Traditional and Souverän product lines.  A general scheme that is useful to remember is as follows; M3xx < M1xx < M2xx = M4xx <= M6xx < M8xx < M10xx.

The M350 on the left is dwarfed by the M1050 on the right. This photo depicts the stark differences between the two extremes of Pelikan’s line-up

At launch, the M300 came in the standard colors of Green/Black and Black.  In that same year, the M350 was also made available which saw the standard black resin barrel married to a vermeil cap.  These tiny Pelikans really have to be seen to truly appreciate just how small they are.  Measuring 4.33 inches in total length, they have a diameter of 0.39 inches and a weight of only 0.38 ounces.  Size notwithstanding, the M300 contains all of the same innards of its larger siblings, maintaining the same high quality fit and finish.  The differential piston filling mechanism draws up approximately 0.7mL of ink due to the reduced barrel size, once again highlighting its focus on quick notes and agenda entries over more serious writing tasks.  All of the hallmarks of the traditional Souverän are present, just on a smaller scale.  The furniture features two trim rings at the piston knob, two cap bands, and a trim ring at the section.  Unlike every other Souverän model, there was never a palladium plated option therefore all M3xxs have gold plated furniture and bi-color nibs.  Most of those pens sport 14C-585 gold nibs with the exception of the M350 which came with an 18C-750 gold nib.  Because of the small form factor, M3xx nibs cannot be exchanged with any other product line.  Available widths from the earliest days of production included EF, F, M, B, BB, OM, OB, and OBB but that range was significantly limited to just three options by the early 2000s, long before the larger models saw a similar reduction.  Anecdotally, despite their small size, it has been my experience that these M3xx nibs are a bit softer with just a hint more spring than their larger counterparts. 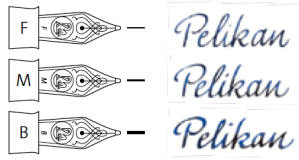 In addition to the standard Green/Black and Black models, the M3xx line would also come to enjoy some special and limited edition releases, though nothing on the scale of their larger brethren.  The vermeil styled M350 remained in production from 1998 until 2001.  A few years later, in 2004, the M320 range of pens would be introduced.  These included the Orange Marbled (2004), Jade Green (2007), Ruby Red (2010), and Pearl (2011).  In 2008, the Black resin model would cease production which meant that after 2011, only the Green/Black model was considered current production.  The line was unique enough to actually receive its own etui, the SML3.  This pen case is sized specifically for the M300 line and is able to accommodate up to three small pens.  As a compliment to the fountain pens, a K300 ballpoint pen (#38 refill) and a D300 pencil (0.7mm lead) were available for purchase as well in the Green/Black and Black finishes.  The same holds true for the M350 series.  While most of Pelikan’s ballpoints take the larger 337 refill, the smaller #38 is much more limited in variety, only available in a medium width of 1mm with color choices of blue, black, or red.  The M320 series did not include any pencils but each model had a matching K320 ballpoint save for 2011’s Pearl which stood alone. 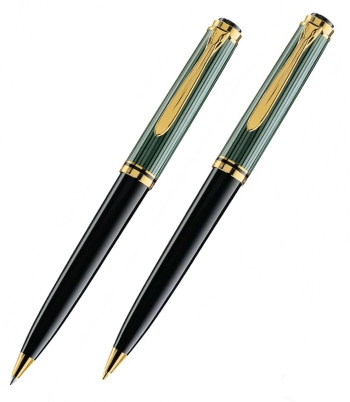 Despite its small size, the M300 has been saddled with a relatively large price tag which has also likely contributed to a reduction in demand.  Its US MSRP has most recently hovered around $490 putting retail pricing anywhere between $355 and $392, depending on the vendor.  For that price, one could obtain a new M6xx or even an M8xx depending on the vendor which, in my mind, makes the M300 a poor value for the money.  Pre-owned standard models on the secondary market tend to be less expensive, generally bringing in anywhere between $135 and $225 based on a review of recent past auctions.  The more limited and exotic M320 editions tend to hold onto their value better and go for more when they are found for sale.

The M300 certainly catered to a niche within a niche and perhaps its discontinuation is long overdue as the niche that it served has shrunk considerably over time.  I suspect that there won’t be too many out there that are horribly broken up by the news of the M300’s demise.  Personally, I have been blessed/cursed with the ability to use just about any sized Pelikan fountain pen comfortably, from the smallish M100 up through the gigantic M1000.  The M300 is the one size that never fit well for me and therefore never saw much representation within my own flock.  With today’s news, I would offer a word of caution regarding reading too much into this move and extrapolating it to the overall health of Pelikan’s fountain pen business.  In general, this decision has seemingly been a long time in the making and is more indicative of a model line with an evaporating market than anything to do with the company’s pen business as a whole.  I do wonder how this news might affect prices on the secondary market as people’s desires seem to get re-kindled when they are told that they can no longer have something.  Please share any thoughts, comments, or experiences that you have had regarding the M300, both good and bad, below.

*All dates are approximate and reported as accurately as possible based on the available reference materials.