Pelikan launched the M800, their first oversized pen, at the Frankfurt Fair in 1987.  The new pen was initially available in the company’s classic green striped Stresemann pattern with an all-black model to follow shortly thereafter.  We know that around this time a third model was released, the fabled Tortoiseshell Brown.  For over twenty years, this was the only tortoise variant available from Pelikan in a larger sized model.  Why this was the case, we can only speculate.  While the brown tortoise M800 has achieved a cult status amongst collectors, some have posited that sales at the time of the initial release may have been somewhat lackluster.  Nonetheless, in 2013 Pelikan re-introduced the M800 Tortoiseshell Brown to great fanfare.  The company must have realized the pent up demand as their sales literature kicked off with the line; “Finally, it is back!  The much coveted model Souverän 800 tortoiseshell brown….”  Both models are now scarce in the secondary market and command a hefty sum when found.  The provenance of that original tortoise has always been shrouded in a touch of uncertainty.  The issue is compounded by the fact that German law only requires companies to preserve records for a period of 15 years so the historic archive is often times fragmented and lacking in primary supporting documents.  That said, Pelikan has done a better job than many at preserving the company’s rich history.  I thought that it might be interesting to explore the available evidence as well as the past statements of some subject matter experts in an attempt to find the truth.  It also provides a good opportunity to take a closer look at each of the two M800 tortoises side by side.  While we may never know the definitive answer as to original pen’s origins, the mystery only enhances its intrigue as a collector’s model.

The exact release date of the original M800 Tortoiseshell Brown is not entirely clear but it most likely came about circa 1988/89 but no later than 1990/91.  This dating is supported by the presence of the 18C-750 nib (earlier models had 14C nibs) as well as the “W.-Germany” stamping on the cap band.  The section, cap, and piston knob are made from a very dark brown resin and the barrel is done in a tortoiseshell pattern, the stripes of which are somewhat irregular with more brownish hues.  The furniture consists of two trim rings at the piston knob, two cap bands, and a trim ring at the section.  Pelikan’s beak clip and two brass medallions at either end of the pen round out the trim.  The cap band is inscribed “Pelikan W.-Germany.”  The nib is a two toned logo nib in 18 carat gold with many models sporting a ‘PF’ customs stamp in the corner.  There is no discrete ink view window but there is translucency in the material to allow for gauging the remaining ink level.  Juxtapose this with the 2013 model and subtle differences emerge.  I will just highlight where the new model differs from its forerunner.  The brass medallions on the cap top and piston knob are gone with the cap top logo now done in a 24 carat gold plate.  The rest of the furniture remains the same.  The cap band inscription on this model reads “Pelikan Souverän Germany.”  The nib is again a two toned logo nib in 18 carat gold but it invariably lacks the PF stamp.  The barrel is a brown tortoiseshell pattern but skews towards orange and grey hues and the stripes are more uniform than the 1980s model.  The difference between the patterns is hard to describe but readily apparent when you see them side by side (as depicted to the left).  Despite the small divergence, the 2013 model tends to be fairly true to its roots. 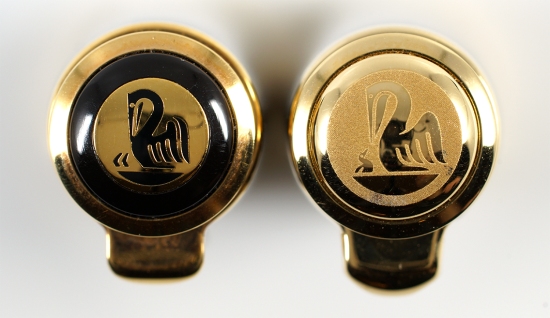 Tortoise cap tops. The late eighties version on the left shows a stamped medallion whereas the 2013 version on the right has a gold plated cap top. The design of the cap tops on the M800 changed in 1997 and again in 2010 with the logo undergoing alteration in 2003 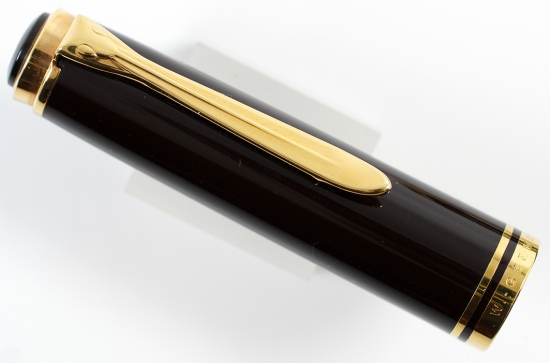 The brown resin of this original late eighties cap is so dark that it looks almost black and is hard to photograph. The color is readily apparent in good light and when juxtaposed with true black. Note the “W.-Germany” stamp on the cap band

With a firm grasp of the design of these two models now in place, let us turn our attention to how the original may have come about.  Pelikan’s first tortoise pens date all the way back to 1935.  The finish was carried forth on several models right through the 1960s and even into the 1970s.  When the product line was reinvigorated with the release of the M400 Souverän in 1982, it took only two years for the company to release a Tortoiseshell Brown variant to the market.  It should not be surprising then that the same finish would grace their newly minted oversized pen which makes the stories that have surrounded that occurrence all the more intriguing.  I’ll give fair warning now that details are scant and very little beyond what I’ve included here is known. 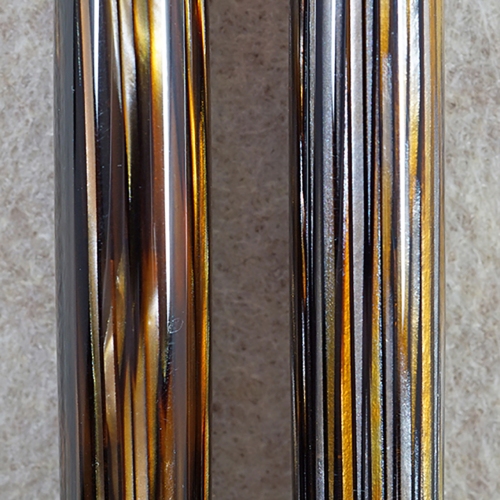 The different patterns between the two Tortoise models is readily apparent side by side as seen in this close up. The lines are less uniform and the color skews more towards brown on the original model (left). The newer version has much more uniformity to the stripes and the color tends to skew towards more orangish-gray hues (right)

The common lore is that this pen was commissioned by a Spanish vendor for sale in that market circa 1990/91.  Regina Martini of Martini Auctions has been a proponent of this history and she backs her account up with nearly 40 years of experience in the pen business.  The works of Werner Ruettinger and Dominic Rothemel also include this foot note.  While nobody knows for sure just how many pieces are out there, some accounts tell the tale of approximately 750 fountain pens and ballpoints being made.  There were about 100 ballpoints that stayed behind and were later sold in the factory shop for cheap.  The name of the Spanish vendor or any further details pertaining to the arrangement have seemingly been lost to time.

This second story comes from the pages of Dittmer and Lehmann’s work, Pelikan Schreibgeräte.  While only a foot note in the first edition, the second edition gives slightly more information.  On page 117, the text briefly states; “Some time around 1991, an M and K800 were produced for the Japanese market in a tortoiseshell/brown color combination.  A leftover quantity was sold in Germany in 1994.”  The Japanese market has seen several unique releases over the years so this story may not be as farfetched as it sounds and is certainly as credible as any of the others.  The fact that it comes from Pelikan’s former archivist and longtime employee does lend some extra weight to the argument though uncertainty remains.

A third, less romantic possibility also exists.  Pelikan may have made these pens not as a limited edition but rather as another finish for consumers at the time of the M800’s introduction but, due to a lack of demand, the run was short lived.  This account completely discards the Spanish or Japanese origin stories in favor of a more dollars and cents approach.  Rick Propas has noted that, presumably due to poor sales, there was a closeout at the Pelikan factory on these pens for the price of 300 Deutsche Marks.  This story is supported by reports that the M400 Tortoise that came before was not a popular seller in its day which also might explain why it took over twenty years to see the birth of another M800 tortoise. 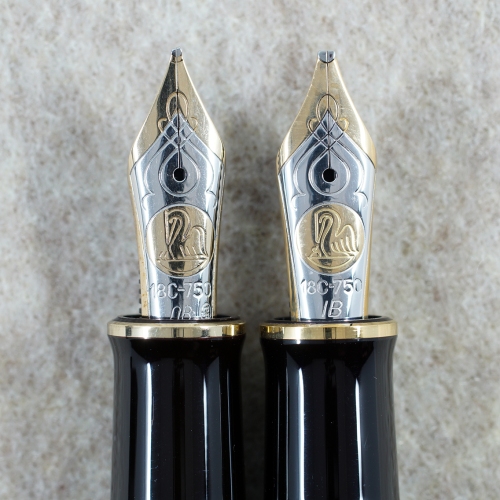 The nib on the left is from the late eighties Tortoise. Note the customs stamp at the bottom right. Aside from the logo, Pelikan’s nib design has remained consistent over the past several decades

Whichever story you might fancy, both models are a treat to behold and a joy to write with.  It is unclear just how many of each are out in the wild but neither are seen on the secondary market with any regularity.  When one does come up for sale, they can command anywhere from $1,500 to $2,500 dollars.  The newer model could be purchased with an accompanying R800 rollerball and K800 ballpoint.  The older model had a matching K800 ballpoint though a D800 pencil is also known to exist but that is a story for another time. 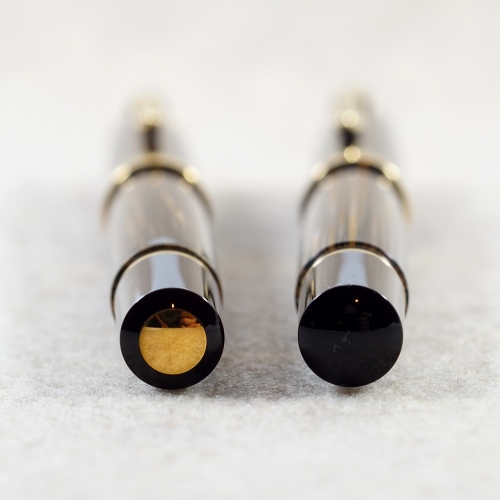 The original model on the left had a brass medallion at the end of the piston knob, a feature that was discontinued in 1997 when the trims across the Souverän lines were standardized