The Pelikan Hubs event is now over and, after a day of reflection, it’s time for my traditional recap.  The most dramatic thing that struck me about the sixth annual Hub event is the sheer amount of growth that has occurred over the past six years.  As I demonstrated in my post analyzing this year’s numbers, the annual registrations continue to grow at an astounding clip.  The 2019 event saw Hubs take place in 200 cities spread across 46 countries with over 5,500 registered participants, a roughly 15% increase over 2018’s numbers.  While those worldwide stats are indeed impressive, I can’t help but be awed by the growth of my local hub.  At the very first Hub back in 2014, there were four of us sitting around a table in a small cafe passing around pens and sharing our experiences with various inks and papers.  Five years later, the Philadelphia Hub is bursting at the seams and I’m sure similar stories can be seen the world over.  The passion of this year’s batch of Hub masters was clearly on display, many going above and beyond to make their individual Hubs extra special.  I commend those who have taken up the mantle because it is thanks in no small part to their efforts that this event has been able to continue to grow.  In Philadelphia, Frank Limper of Federalist Pens and Paper helmed the Hub for the second year running, once again selecting The Victoria Freehouse Pub to play host.  With tasty food and refreshing drink, the venue provided a cozy atmosphere though perhaps one our Hub has outgrown.  The only major downside to the location this year was the lack of street parking due to an event happening at the waterfront.

Per usual, the enthusiasm amongst the Hub goers was high.  I arrived around 6pm and at least half of the attendees were already present and enjoying each other’s company.  Attendance only grew from there and I would wager we had something over 40 people present once all was said and done.  It would not be a stretch to call this Philly’s biggest Hub gathering to date.  A lot of the attendees were veterans and it was nice to connect again, reveling in our shared passion for fine writing.  Several first time Hub goers were in the mix as well and I got to meet some wonderful new pen friends.  Many pens, inks, and paper were on display and freely being shared which created a great atmosphere.  I brought my whole flock with me but rather than set up at a table this year, I played host to a few episodes of show and tell.  While our online community is an amazing group of people that I enjoy interacting with, there is something extra special about the personal contact that the Hubs foster.  The face to face human interaction, gathering in person to celebrate the analog, is something I really relish.  There are just so few opportunities afforded for that these days and Pelikan should be commended for their efforts to foster such meetings.  They are bringing people together in a way that I have not seen any other manufacturer or distributor embrace to date.

A history of the Pelikan Hubs event in Philadelphia, PA, U.S.A.

Pelikan, to their credit, continued the generous practice of providing swag for the registered attendees.  Everyone took home a bottle of Edelstein Star Ruby ink, a themed notepad, and a copy of the second edition of “Passion,” Pelikan’s magazine for handwriting culture.  The company again provided each Hub a large flag to be used as a banner for the event, the third instance of them doing so.  Frank, our Hub master, is a registered Pelikan dealer and had several Pelikan pens and inks available for purchase.  Those wares included the newly released M200 Star Ruby fountain pen which was wonderful to see.  Pelikan’s promotional photos have not done it any justice.  In what is fast becoming tradition, Frank again offered up a Pelikan P16 Stola III fountain pen as a door prize.  Dave K. took home this year’s prize when his name was randomly drawn from a hat.

Frank L. with Dave K., the winner of the P16 Stola III giveaway at this year’s Hub

The Hubs have grown well beyond Pelikan’s wildest expectations.  It has become one of the premier pen events of the year and I hope that it is able to continue to expand and accommodate all those who would like to attend while also remaining sustainable.  As the Hubs increase in size, 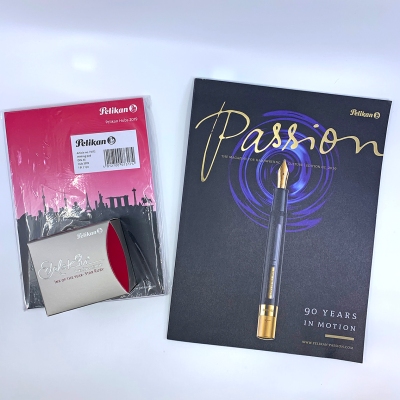 finding suitable locations will become ever more challenging and I continue to question at what critical mass will the event begin to implode, becoming a victim of its own success.  Hopefully that does not come to pass for some time.  I think that Pelikan has made some improvements this year.  Registration was relatively easy with ample time provided to submit an entry.  New locations were added at an impressive rate.  It seems that most packages of swag arrived earlier than in years prior allowing more time for Hub masters to prepare.  I would like to see Pelikan advertise the registration a bit more heavily and broadly as there are always people that seem to be left on the outside looking in and scrambling to get a seat at the table after the fact.  I think more social media interaction and perhaps utilizing some of the popular pen forums could go a long way.  If anyone reading this blog found themselves missing out on this year’s registration, I would encourage you to subscribe to this site so that you might be kept abreast of all Pelikan news and not miss your opportunity to register next year.

Our Hub master front and center 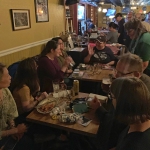 A message from the master

Our Hub master and his family

In closing, I’d like to thank Frank for his efforts as Hub master as well as all of those who attended, making the Philadelphia Hub so enjoyable and the highlight of an otherwise mundane work week.  I also would like to take a second and acknowledge that we’ve lost a pen friend along the way.  A member of the local pen scene and faithful attendee of the Philadelphia Hub, Edward “Ed” Budman passed away on November 24, 2018.  He kept a lovely flock, was a wonderful gentleman to talk pens and life with and is missed at these gatherings.  With that said, I’m looking forward to next year’s event and have even been contemplating hosting my own mini event to bridge the gap and extend the fun.  Stay tuned for more details on that.  If you’ve missed out on any of the festivities, you can find photos from the other Hubs around the world on your preferred social media via the hashtag #PelikanHubs and #PelikanHubs2019 or see them aggregated at Walls.IO.