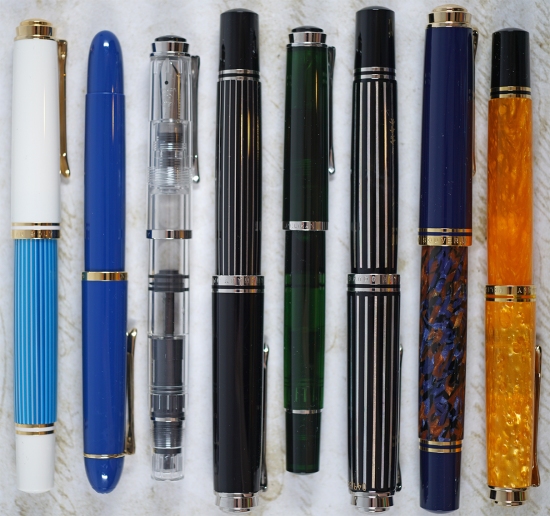 Barring any further unforeseen news breaking over the next few weeks, this will likely be my last post of the year as we gear up for the Christmas and New Years holidays.  I thought that it would be useful to look back at what 2018 has brought us and maybe try to prognosticate a little of what 2019 might hold in store.  Pelikan has already given us a peek into some of what lies ahead.  There was a lot of buzz and excitement going into this year in particular.  After all, it’s not every day that a company turns 180 years old.  Over the past five to six years, Pelikan has really ramped up their annual number of new releases and this year was no exception with ten new birds joining the catalogue.  While I was personally left somewhat underwhelmed, there were more than a few gems to be had amongst the lot.  Of course the year wasn’t just about new pens.  We were given Edelstein Olivine as the Ink of the Year and Garnet was resurrected to live on in the standard Edelstein line up.  Many of us were also fortunate enough to be able to take part in Pelikan’s largest gathering of pen enthusiasts to date for their 2018 Hubs event.  While we had a lot of good come out of 2018, we were all left a little cold when Pelikan increased the prices of their EF nibs across the globe.  Read on for a recap of all of the year’s highs and lows as well as some thoughts on what’s to come.

The M600 Turquoise-White is the latest in what has emerged as a theme of colorfully striped pens in the M6xx line-up.  It joined the M600 Pink (2015) and the M605 White-Transparent (2017).  While white pens can be polarizing, I don’t see any signs of Pelikan backing off of this theme. The Turquoise-White definitely looks much better in person and actually appears more blue to me than turquoise.  Despite lacking an ink view window, I think that this one started the year off on good footing.

The M120 Iconic Blue, like its predecessor the Green-Black (2016), remains an all out great pen.  It is an incredibly reliable writer that makes for an excellent daily workhorse.  Its clean lines and classic Pelikan appearance combined with a legendary filling system make this a formidable contender as one of the best fountain pens with a stainless steel nib out there.  The blue is a beautiful shade that swallows up the whole pen and looks great with the gold-plated furniture.  Just like the model before, it continues to be hampered by exorbitant pricing which is perhaps its only weakness.   As I stated in the past, it is a school pen with Souverän pricing.  If you can set pricing aside or find a good deal on one, this is one of the best models to have come out this year in my humble opinion. 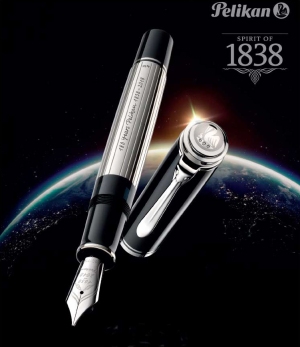 The Spirit of 1838 was a limited edition of just 180 fountain pens built off of the M1000 chassis.  The pelican beak clip, fittings, and barrel are made of sterling silver and the body of the pen is engraved “180 Years Pelikan 1838 – 2018.”  The end of the piston knob is engraved with the edition number and the cap top depicts the standard single chick logo embellished with three diamonds along the nest.  These are meant to represent trust, reliability, and production in Germany.  The nib is rhodium plated 18C-750 gold and was specially engraved for the anniversary.  A nice pen for sure but one out of reach for most of us.  I had high hopes for this one but it fell a little flat in the looks department for me.

Pelikan resurrected a past model from 2005 with the release of the Classic M205 Demonstrator.  The pen is adorned with the standard chromium-plated furniture that is characteristic of the M205 line and is distinguished from the original release by a chromium plated crown rather than black plastic.  This release was somewhat of a surprise which came and went without much fanfare.  Many people do not like demonstrators due to their inherent nature of revealing all of a pen’s acquired imperfections but it is a solid addition for those who do like demos that don’t break the bank.

The M815 Metal Striped fountain pen feels worthy of a 180th anniversary year release.  It took a long standing theme that represents a company icon and elevated it in a subtle and alluring way.  While its design does skirt awfully close to the M805 Stresemann as far as looks go, I think that this one sets itself apart a bit more than it seems, particularly when you see them side by side.  The added weight can be noticeable after a while but this is an awesome pen for the those that like a heftier model.  Perhaps one of the nicer big birds to come out this year. 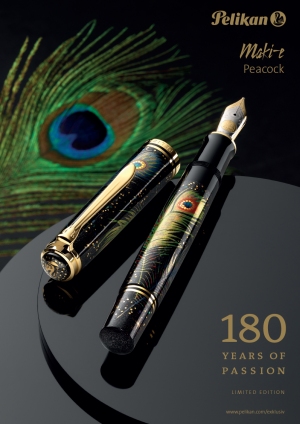 This Maki-e design was built off of the M1000 chassis and depicts the brightly colored plumage of the peafowl set in sharp contrast against a black background.  It was released in an edition of only 111 pieces worldwide.  With a hefty price tag and limited availability, only a select few got to enjoy this one.  That said, its labor intensive artwork and bright coloring really make it a standout.

The M205 Olivine demonstrator was designed to emulate the corresponding Edelstein Ink of the Year which it accomplished in stunning fashion.  Rather than being a pure single shade of olive-green, the pen shows varying shades of green along its length.  In addition to the chameleonic color scheme, the pen features chromium plated furniture and a stainless steel nib without any plating.  I had waited patiently for this one for two years and it did not disappoint when finally released.

The M800 Stone Garden brought a bit of subdued color to a year that saw a lot of black and silver releases.  The dark blue of this M800 is a nice shade and the marbling on the barrel shows some depth.  It really stands out in good lighting and has a darker, brooding look when seen in poor lighting.  It is nice to have something a bit different in the line-up and I think the Stone Garden was a pleasant surprise for most.

The M600 Vibrant Orange displays an awesome orange coloration with bands of exquisite pearl essence which provide the pen with an amazing level of depth and complexity.  That is contrasted by duller bands which were an issue for some, myself included.   Still, the colors are compelling and it’s not often we get such a bright and bold Pelikan fountain pen.

Ink of the Year, Olivine 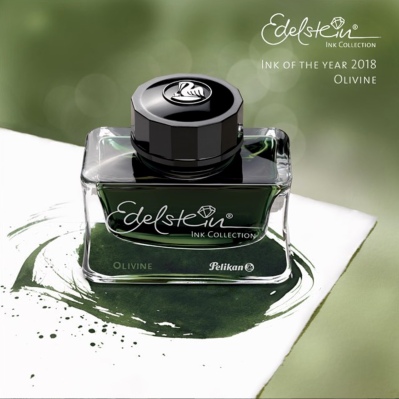 Olivine followed the brown tinted Smoky Quartz from 2017 and was the seventh Ink of the Year release to date.  The olive-green color was fan chosen and is definitely a great addition to the line-up.  It is soon to be replaced by 2019’s Star Ruby so now is your chance to pick up an extra bottle or two while supplies last. 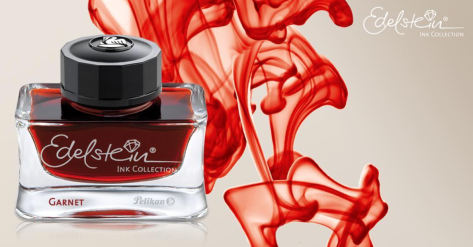 Garnet was originally released in 2014 as a limited edition and was billed as a dark red.  This is the second time Pelikan has chosen to resurrect a limited edition Ink of the Year and add it to the standard line-up which really calls into question any claims of an ink’s “limited” nature.  Despite that, many were happy to see its return though I think there are other limited editions more deserving of resurrection than Garnet.

In January of this year, I reported that Pelikan pens equipped with an EF nib and sold in the European Union were due for a price increase of 10-12%.  This added roughly $12 to $50+ more to the pen’s final price.  The United States had been spared from this until the release of the M600 Vibrant Orange.  Now all EF equipped models will carry this premium for reasons which still are not entirely clear.  These increases have not added anything to the pen’s value and have firmly changed my buying habits to avoid all newly released EF equipped Pelikan pens. 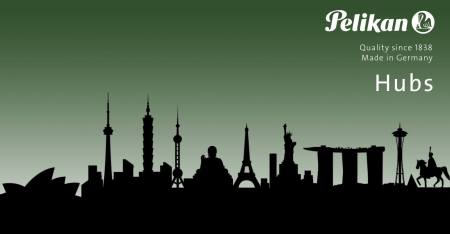 This year saw gatherings take place in 181 cities spread across 46 countries with over 4500 registered participants, a roughly 30% increase over the year prior.  The Hub masters continue to show no shortage of passion and commitment though frustrations did surface this year after a few missteps on Pelikan’s part.  Still, most were able to persevere and enjoy a great night of camaraderie over our shared passion.  Pelikan, to their credit,  provided a set of Edelstein inks for sampling along with swag for each of the registered attendees.  Each registered participant took home a bottle of Edelstein Olivine ink and a 5th anniversary notepad in addition to a copy of Passion, Pelikan’s first edition magazine for handwriting culture.  The company also included a large flag which served as a banner for the event.  I have always enjoyed this gathering and hope that Pelikan can continue it well into the foreseeable future.

It is easy to look back and discuss what we have already been given.  It is much harder to look ahead.  Pelikan has been very tight-lipped about upcoming releases over the past several years and vendors who violate their contractual obligations by leaking releases do so under risk of great penalty.  The company has already provided word of the Herzstück 1929 and Edelstein Star Ruby, both due out in March of 2019.  While not yet announced, I think it is likely that we will see an M1005 Stresemann in the first quarter of 2019 as well.  This was rumored to be a last quarter release for 2018 but appears to have been pushed back.  That is the most concrete prediction I have for next year.  Based on past trends, however, I don’t think that it would be unreasonable to anticipate a new addition to their M101N series beyond the already announced Herzstück.  I think a pen more appropriately priced for the masses but drawing on that heritage would be very fitting for the 90th anniversary of Pelikan’s fountain pen production.  I also think that another white M6xx pen with a colorful striped pattern would be a safe bet as well.  We should absolutely expect an M2xx Star Ruby if Pelikan continues the tradition established over the past four limited edition releases.  Of course there will be a smattering of yet to be named M8xx releases as well and who knows what other surprises.  I think 2019 has the potential to actually be more interesting than this year but only time will tell.

As for me, I will continue to endeavor to bring you all of the latest Pelikan news as well as original content into 2019 and beyond.  Subscribing to the blog is a great way to stay up to date and be alerted when new post are published.  You can find a link in the sidebar to the right.  Please take some time to post in the comments below and let me know what you would like to see from Pelikan in 2019.  Also, I’m always open to suggestions so if there is a particular topic that you would like to see me tackle in the new year, please leave a note below and I will do my best to accommodate.  Thank you so much for your support as that is a large part of what keeps me going.  Have a safe and happy holiday no matter what you celebrate.  See you in the new year.