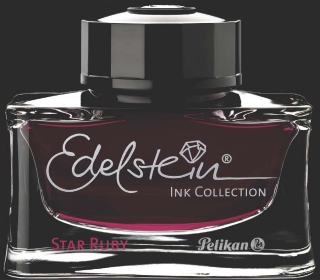 As the embers of 2018’s excitement begin to slowly fade with the year’s close, Pelikan rekindles a sense of anticipation for next year by giving us a small taste of what’s to come.  News broke yesterday of the limited edition Herzstück 1929 which pays homage to the origins of Pelikan’s fountain pen production some 90 years ago.  Today, reports of the 2019 Edelstein Ink of the Year have surfaced.  With the introduction of Star Ruby, the palette appears to have swung from a shade of green to more reddish hues.   This will be the sixteenth gemstone inspired color to grace the line-up.  The forthcoming Star Ruby will join the likes of Turmaline, Amber, Garnet, Amethyst, Aquamarine, Smoky Quartz, and Olivine as the eighth Ink of the Year.  Unlike last year’s Olivine, this one was not a fan chosen shade.  While details are just emerging, we can expect availability sometime in March of 2019. 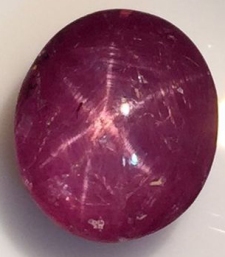 Star Ruby the gemstone is a rare variety of ruby that displays a sharp six-rayed star that shimmers over the surface of the stone when it is moved.  This property is known as asterism and is due to aligned needle-like rutile inclusions.  The stones can range in color from pinkish to orangey or purplish and brownish-red.  Without an ink swab at our disposal, just what exact color or properties the ink will display remains unclear.  The ink looks to be more of a burgundy color with some pink undertones per Pelikan’s description.  It kind of looks like a cross between Turmaline (plum) and Amethyst (purple) to my eye.  Interestingly, there is already a Ruby in the standard line-up but that is more of a brighter red color than what this appears to be.  Star Ruby will most likely be available in 50 mL bottles and is anticipated to be produced for a limited time only.  I don’t expect this to be available in cartridge format.

While not yet announced, I think that we should also expect a complimentary M2xx Star Ruby demonstrator to follow sometime later in the year.  I would suspect that Pelikan may go with the chromium trim of the M205 for this one as I have a feeling that would be the most complimentary color combination.  Of the four companion pieces to date, we have had three M205s (Amethyst-2015, Aquamarine-2016, and Olivine-2018) and one M200 (Smoky Quartz-2017).  What are your thoughts on Star Ruby?  Is this a shade you can get behind or is it an ink that won’t be too hard to pass up?