September 16th has come and gone, leaving in its wake a lot of the excitement that culminated in the third annual Pelikan Hubs event.  Rather than post my thoughts immediately, I wanted to take some time and let it breathe.  The third annual Pelikan Hubs took place in at least 109 cities spread across 37 countries with roughly 2600 fans registered to attend.  Just as last year’s event showed tremendous growth over the inaugural year, Hubs 2016 has demonstrated that the event continues to pick up momentum.  This year marked the second consecutive time that I was chosen as the Hub master for the Philadelphia, Pennsylvania, USA location.  Thankfully, the Pope remained in Rome this year which helped to avoid much of the traffic nightmare that occurred during last year’s hub.  Site selection remains a challenge for Hub masters worldwide.  As you might imagine, it is difficult to find a suitable location that can accommodate an event of this size, be centrally located, have good lighting, not be too loud, and be available gratis.   I also like to ensure attendees a chance at food and beverage since the event occurs during the dinner hour.  With those parameters in mind, I set out on an extensive search of the city and had quite a few misses which took us right down to the wire.  Ultimately, I found an amazing establishment that was gracious enough to host our party free of charge.  This year’s Philadelphia Hub went down at Cooperage Wine and Whiskey bar located in the historic Curtis Center in the Washington Square neighborhood.  Cooperage bills itself as combining southern bistro fare with an eclectic list of wine and whiskey from around the world.  The restaurant is very welcoming and has a great feeling of warmth about it.  It certainly doesn’t hurt that the food menu is excellent as well.  The establishment boast over 90 different kinds of whiskey available.  The good people at Cooperage provided us a great area in which to hold our event and I can’t recommend them highly enough if you’re looking for a venue for your next function. 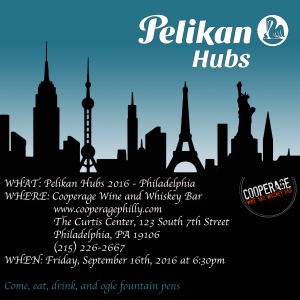 Libation in hand, the group convened at the appointed 6:30pm hour.  This year, our local hub showed the best attendance yet with at least 20 people turning out for the festivities.  There were several friendly faces from last year’s gathering as well as many newcomers.  Veteran or novice, it seemed that everyone quickly fell into an easy grove, united by our common interest in fountain pens and all things Pelikan.  Some people turned out with their whole collections, formidable flocks indeed.  Several rare special edition releases were represented.  A few attendees had yet to purchase their first Pelikan and used the experience as a chance to better understand the landscape of available models.  I’m always delighted by the generally good natured and friendly people who participate in our hobby and this hub embodied that.  One interesting foot note is that we had a neat family connection this year with a father and son each participating but attending hubs 1200 miles apart from one another (Philadelphia, PA >> Minneapolis, MN).  As an added resource Frank, a local collector and the retailer behind Federalist Pens and Paper,  attended our hub and brought some of his wares for perusal and purchase.  Up for sale were the M205 Amethyst, Aquamarine, and Blue Demonstrator.  While all three are great, I’ve grown quite partial to this year’s Aquamarine release.

While Pelikan did not provide a set of Edelstein inks for sampling like last year, they did include some nice swag for hub goers.  Every attendee took home a flacon of Edelstein Aquamarine ink, a Pelikan hubs themed notebook, an Aquamarine postcard, and a pen slip designed to be fitted to a notebook.  I was also able to supplement this with some of last year’s left over swag including several tins of Amethyst ink cartridges.

Pelikan Hubs 2016 swag. The porcelain Pelikan stand was not part of the give aways. There were some regional variations in gifts due to the overwhelming registration this year.

I again took the opportunity to share my entire flock with the group.  It’s not often that my collection gets to stretch its wings.  I had a great time relaying much of what I’ve learned over the years as well as being able to help identify one or two mystery pens.  There is nothing like being able to discuss a brand that I’m passionate about with fellow enthusiasts face to face.  Sadly, it doesn’t happen often enough and I’m already excited for next years event.  Not to exclude anyone, there were also several non-Pelikan pens in attendance which allowed us the opportunity to compare and contrast the best and worst of each.  Their inclusion brought some much welcomed diversity to the event.  The gathering ran from 6:30-9pm and I enjoyed myself so much that I actually forgot to order dinner.  I think that Pelikan would be well advised to continue hosting this event for the foreseeable future.  I certainly have some suggestions on how to better equip the hub master to deal with the challenges of the position and have shared those with the company.  Despite a few issues on the back end, I think this year was a resounding success.

Photos above and below are courtesy of Angus Dowton Check out all of the photos from the Hubs around the world on your preferred social media via the hashtag #PelikanHubs or see them aggregated at Walls.IO.

A few of this year’s Philadelphia Hub attendees