In a surprise June announcement, Fountain Pen Hospital broke the news that they would be releasing a limited edition Pelikan fountain pen exclusive to them.  Founded in 1946, Fountain Pen Hospital has been a long-standing and well-respected retailer of fountain pens on the East Coast of the U.S.A. so it’s not surprising that they would have the clout to arrange such a release.  Still, the announcement was a bolt from the blue since there wasn’t even a hint of rumor preceding the Bayou’s arrival.  The pen, dubbed the M201 Bayou, was a very limited release of just 100 fountain pens.  Slated for an August issue, many of us were pleasantly surprised when shipping notifications started going out in early July.  The next word that we got about the Bayou was that it had sold out after being on the market just shy of three weeks.  I debated the utility in reviewing this pen given that so few people will actually ever own one but it’s such a beautiful piece that I wanted to give it its due.  Officially labeled the M200 ‘water soil’ by Pelikan, this pen stands out as unique amongst the Classic series in several ways that I will describe below.  The M201 designation itself is not unprecedented as Pelikan has used this moniker before to distinguish limited, local releases.  The M201 clear demonstrator issued as a limited run of 3000 pieces in the year 2000 to the Japanese market is one such example.  If you know your way around Pelikan’s lines, you can’t help but look at the Bayou and instantly be reminded of the M620 Grand Place, a pen which shares a very similar aesthetic.  This similarity has raised more than a few questions about the genesis of this run.  Read on to find out more.

Packaged in a standard Pelikan G5 gift box, the M2o1 Bayou or ‘water soil’ is very aptly named.  The muddy browns have a pearlescent appearance in the light that serve to add depth to the look of the pen.  The deep blue hues running through it conjure thoughts of flowing waters through desolate landscapes.  Many of the blue swirls are flanked by the thinnest stripe of clear material which only serves to highlight them further and add to the striking appearance of the pen.  Pelikan has made a departure here from its prior M2xx releases.  For instance, the barrel is translucent which allows for viewing the ink remaining in the pen.  This is the first M2xx release that I can ever remember not having a dedicated ink window which is probably the most unusual and distinguishing feature of this pen outside of the finish.  The other interesting design choice is the cap top.  All of Pelikan’s M2xx releases in recent years have been styled with a gold trimmed cap top.  The Bayou employs the all black trimmed cap top last seen on a release in 2009.  The pen’s finish looks so much like the M620 Grand Place that one can’t help but wonder if they are somehow related.  The Grand Place was released in 2006 and was the last of the M620 series.  Perhaps there was enough stock left over from that run for a few M2oos, hence the production of so few Bayous.  This is all just speculation of course but it would certainly seem plausible.  That could also just be my imagination running wild since the Grand Place looks a little more reddish-brown than the Bayou and the M620 does not have any translucency to it.  Aside from the unique finish, the rest of the pen is standard M200 fare.  There is a painted one chick logo on the cap top and a single cap band.  The only trim ring on the pen is a single ring at the piston knob.  The nib is made of the gold-plated stainless steel that is standard for this line.  Taken all together, the design really stands out making this a unique and sophisticated addition to the Classic line up.

The brown has a pearlescent appearance to it in good lighting

The piston is visible when held up to the light as is the remaining ink level when full. The only M2xx release to date with a translucent barrel

I can think of several things that I might criticize the company over but the build quality of their pens is not one of them.  I’m never disappointed in the fit and finish of even their lower tier pens.  The Bayou has a feel of solid craftsmanship about it.  All of the pieces fit well and there is no play in the piston knob.  The piston travel is smooth and the cap is unscrewed in just 3/4 of a turn.  The clip is strong and holds a shirt pocket with ease.  The only points off here owe to the mould lines that we see in the Classic series of pens.  These models aren’t as polished as the Souverän line.  While not an issue for me personally, I know that this bugs some people.  That said, these are some of the faintest mould lines that I recall seeing on an M2xx release in a while so maybe extra attention was paid since this is such a small run of pens. 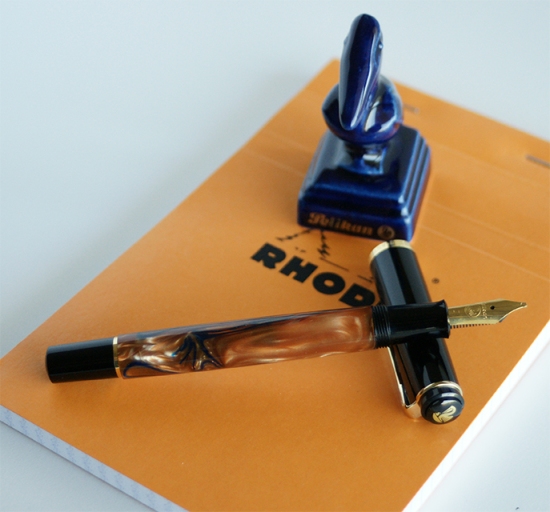 It’s no secret that the M2xx line are my preferred pens in terms of size and weight.  I love the M600 and M800 too but for different reasons.  I’ll gladly take an M2xx into daily battle with the working world anytime.  It’s a light pen weighing in at only 0.49 ounces.  It is also short with a barrel of just 3.23 inches.  That said, post the cap and the pen extends to a respectable 5.71 inches that can only be described as perfectly balanced in the hand.  Now this size suits me just fine because I’m an habitual poster.  If posting pens is not your thing, you may find it on the short side.  To round out the dimensions, the pen is 4.92 inches capped with a diameter of 0.46 inches.  This is very similar to what you’ll find in the higher end Souverän M400. 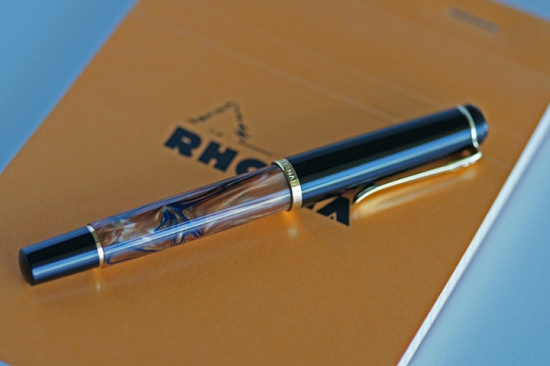 Until several years ago, Pelikan had a rather diverse and interesting line-up of nibs.  While nowhere near as varied as their historical offerings, it was still a respectable line up.  Unfortunately, many of these were phased out such that all of the recent releases have offered only EF, F, M, and B nibs.  All of those options were present here but we were also given the option of an italic nib.  Pelikan’s M200 italic nib functions more like a medium-sized stub.  It was around for a while on the black M2oo and last seen offered on the M200 Cognac.  It has been absent from the last several releases but was offered with the Bayou.  There must have been a limited quantity and/or overwhelming demand as these sold out before the end of the run.  The performance of the nib will be subject to its own review in the future but suffice it to say you get a fun, stubbish writing experience.  It is one of the few modern Pelikan nibs to provide any kind of line variation out of the box.  While not likely suitable for everyday use, I find it nice for letter writing and applications that require a little bit of flourish.  The flow is wet and the nib travels smoothly on the page, all of which I expect from a Pelikan.  Don’t expect a true italic experience but if you keep your expectations realistic, you’re likely to enjoy this nib for the change of pace that it offers.

The two biggest features that I would boast to anyone about the brand are the filling system and the ease of maintenance that these pens offer.  To start, the filling system has been tried and true over many generations and if it’s not broken, don’t fix it.  The piston travels smoothly and you get a fill with a decent amount of ink with little to no trouble.  The piston knob seats securely against the barrel when not engaged and you never have to worry about it coming loose.  These pens also offer a lot of value in their ease of maintenance   The nib is user removable which facilitates an easy exchange of compatible nibs, facilitates quick flushing of the pen, and allows for easy lubing of the piston when required.  It’s a small feature that goes back to the beginning of the brand’s handling of fountain pens and there is good reason it hasn’t changed over these many years. 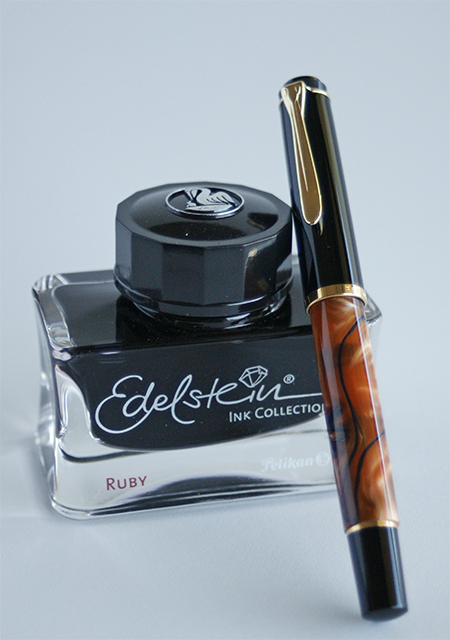 The M201 Bayou was sold for $179.  Since it was an exclusive release, there was only one price to be found.  I give Fountain Pen Hospital credit here as this price was only $10 more than their asking price for more standard pens such as the recently released M200 Café Crème.  You may argue that the base price is still more than it should be and I would agree with you but given that there were only 100 pens, they certainly could have demanded more of a premium.   Once this pen was in hand, I can attest that, in my humble opinion, it was well worth the price of admission.  I imagine that we’ll see a few of these pop up in the market a few years from now with exorbitant price tags.

A week ago, I would have said that the M201 Bayou would go down as an oddity in the classic line but Pelikan has since gone and released two more exclusive editions to the market.  I’m sure that the story for those will play out much like that of the Bayou and I question just how many more releases we’ll see of this nature.  It almost evokes a sense that Pelikan is cleaning out their closets and getting rid of left over resin from past projects.  None the less, the Bayou is now in the books as a rare bird, one that may have kicked off a slew of limited releases.  The elements of the Bayou really come together to make a very striking pen.  I’m sure that it won’t suit everyone’s taste but I do believe there will be many more than the 100 owners out there who would have loved to have gotten their hands on one of these.  The pen is fun to look at and a joy to write with.  In my collection, it ranks in the top 5 of M200 releases.  If you have one of these beauties, enjoy it.  If you missed out, I hope you get a chance at owning one someday in the future. 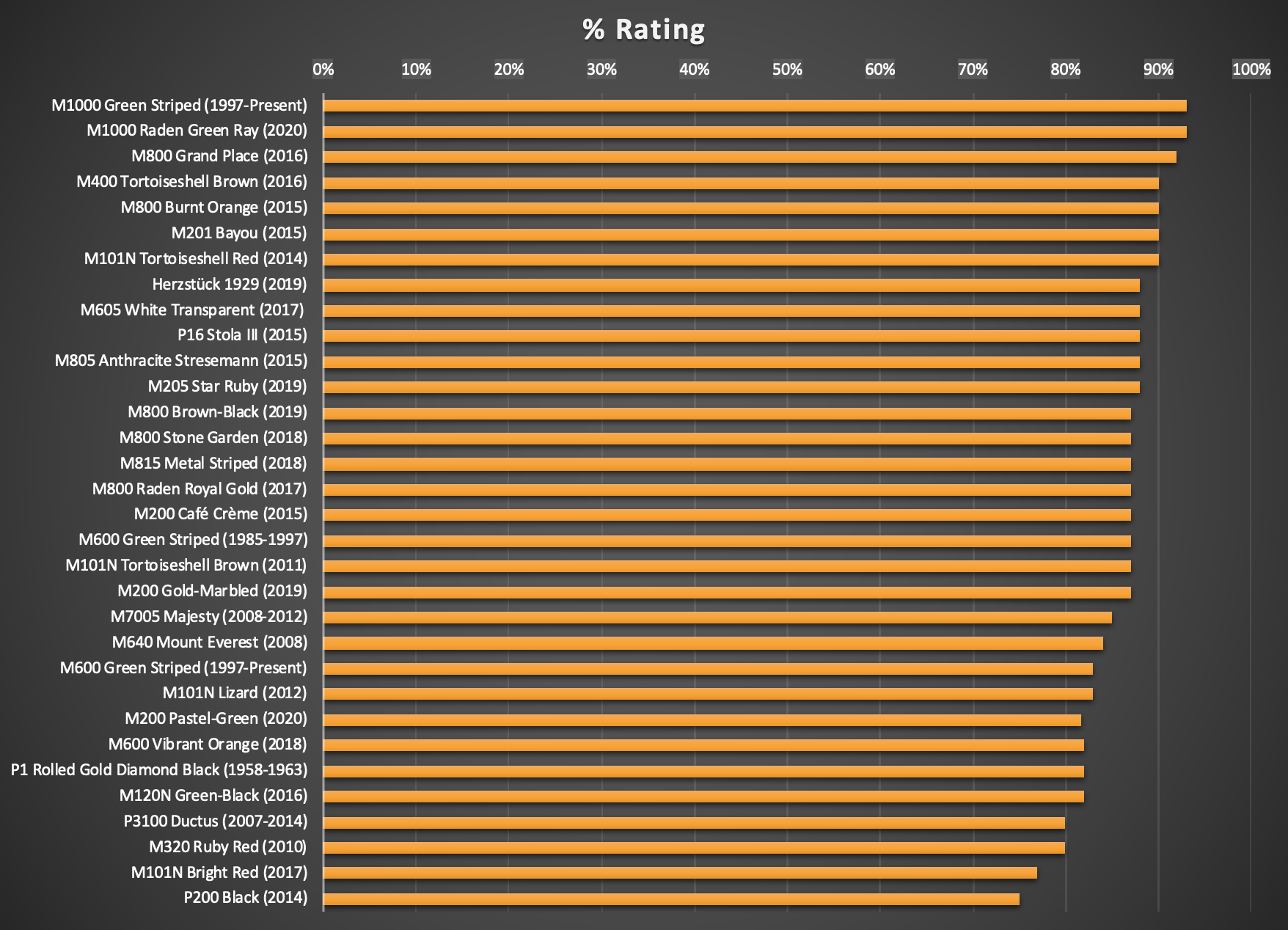