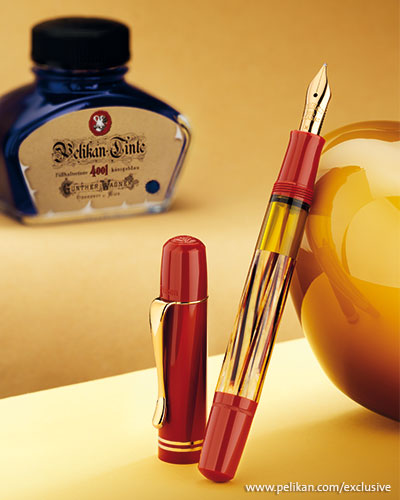 Pelikan will soon release the third pen in their series of modern 101N’s.  The first 101N was released in 1937 and this series pays homage to that lineage in a somewhat more modern and updated design though still retaining the original’s dimensions.  This pen is the M101N Tortoiseshell Red and it is slated for release in September of 2014.  This model follow’s the very well received Tortoiseshell Brown (2011) and the Lizard (2012).  Previous releases have had an MSRP of $550.  Pre-orders are currently being offered throughout the web ranging from $480 to $520.  This is a limited run so when they are gone, they are gone.  Given the absolute stunning appearance of this pen, I wouldn’t expect them to last long.  Don’t regret missing out and grab one while you can.  Here is what Pelikan has to say on their product page;

“Following the successful models M101N tortoiseshell brown and M101N lizard, Pelikan launches the third variation in the historical series: The M101N tortoiseshell red. This model comes with an attractive gift box & one bottle of 4001 royal blue ink. Both feature a special historic motif, which makes the set a beautiful gift for every lover of the Pelikan brand.

The barrel is made of the typical Pelikan cellulose acetate in a very unique pattern. Connoisseurs know that the production of this decorative core of the fountain pen is extremely work-intensive. The dark-red parts are made of high-quality resin that polishes itself time and again during use. You can choose the 14 carat gold nib in four sizes: EF, F, M, and B.

This gift set will only be available in a limited quantity, starting September 2014, so make sure you secure your piece before it’s sold out …”